Linda Laura Roulet, the independent curator who invited the eight artists whose works are featured in the “12th National Drawing Invitational” opening Friday at the Arkansas Arts Center, talks about the artists and their work in her essay “Drawing as both Noun and Verb” on a website created by the Arts Center on the show. It’s the first time, to my knowledge, that the Arts Center has created a special website for an exhibition, and a super website it is, with large photos of the drawings, news about related events, an essay on the show by Arts Center drawings curator  and show co-curator Ann Prentice Wagner and writings and images by each of the artists in the invitational. For an example of the latter: the intro to Linn Meyers’ artist’s statement, whose work you see above:

Each one of my drawings begins with a single mark — a line that traces a pre-determined framework of circles, or a simple singular gesture. This first stroke defines the direction in which the entire drawing will evolve — each line is a direct response to the mark made just before. These marks amass to create an image which is both still and moving, ordered and chaotic, both pointing toward perfection and also wholly imperfect.

Artist Gary Kachadourian is installing his “xerographic” drawings in various places in the Arts Center now, including the Winthrop Rockefeller Gallery, where he’s turned the closed off doors of the WPA facade of the building into windows: 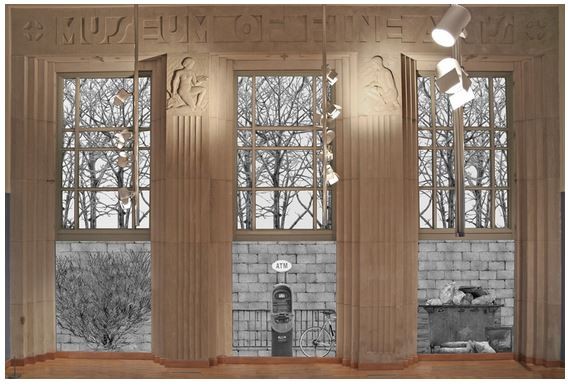 The Arts Center’s collecting focus is works on paper, and this exhibit — a biennial once more after a long hiatus during the Arts Center’s unsettled period — exposes us to unique paths the drawing form is taking in the 21st century and the value of the collection focus.