Arkansas Times Recommends is a weekly series in which Times staff members (or whoever happens to be around at the time) highlight things we’ve been enjoying (or, in Max’s case, not enjoying) this week.

Only old timers will know the name Y.A. Tittle. Hell, he’s even old to me. But I was an LSU fan and he was famous as a quarterback there before he became a Hall of Fame NFL quarterback, forever famous for a bloodied photograph following a critical interception in a championship game.

Seth Wickersham visited with Tittle, now 87 and fading with dementia. It’s a gripping portrait, with plenty of football and a full life and wonderful daughter thrown in. It’s well-displayed with strong photos. Good read. — Max Brantley

Over the past couple of years I’ve become a huge cycling geek. Which means I wear spandex way more than I ever thought I would (more than most should), I’ve become familiar with obscure French words (peloton, derailleur), and 90 percent of the time I spend on the internet is devoted to browsing cycling-related material.

Recently I stumbled across an Instagram page (instagram.com/pedalstrike) that featured amazing portraits of Tour de France riders made out of condiments. Lance Armstrong painted from BBQ sauce, for instance. Pedal Strike, an artist from Japan, has been posting a daily portrait as the Tour de France rolls along this month. 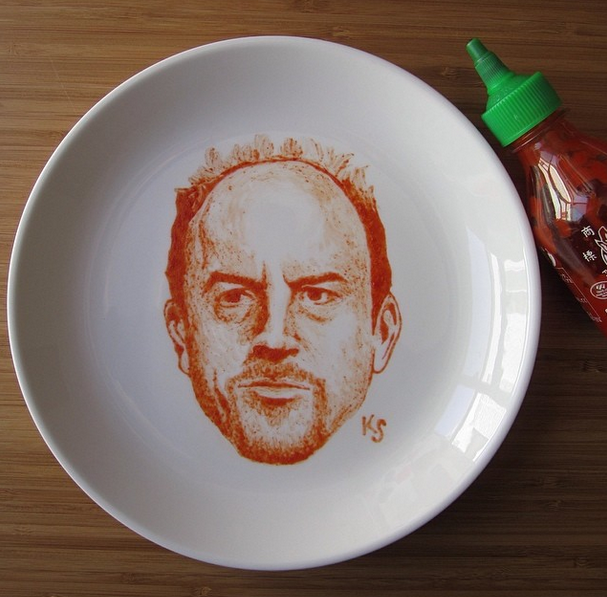 She began posting condiment portraits in March. There are lots of cyclists in the mix, but she’s also done a series of soccer players in honor of the World Cup and there’s also a pretty fantastic portrait of Louis C.K. made from Sriracha. Bike nerds, foodies and art appreciators alike should give her a follow on Instagram. — Kai Caddy

Last month, the Oxford American finally made available online Times associate editor Dave Ramsey’s classic piece on Prince’s Hot Chicken from 2005. A Nashville institution since 1945, Prince’s is, he explains in the article, the city’s “oldest hot chicken joint still in business, and the best.” The chicken is viciously hot, fried in a secret cayenne cocktail that tastes “otherworldly, so fierce you’re ready to make up brand new cuss words because no existing exclamation is sufficient.”

Last week I got the chance to visit Prince’s (it was Dave’s idea; his loyalty to the place hasn’t flagged), and can now appreciate how much he isn’t exaggerating here. As much as I love Gus’s World Famous, this is just an entirely different species of hot chicken. I had trouble breathing afterwards. I came very close to not ordering a drink, and still wake up in the middle of the night considering how life-threatening a mistake that would have been. It was shocking, and great. — Will Stephenson

This will become obvious when you see it, but I’m quite the animator. —  Bryan Moats

I went to my first cooking class this week at Dandelion, the new herb store in the River Market (if you haven’t already ventured in there you need to stop by and take a gander). The class was hosted by owner Matthew Cooper, who is also the executive chef at Cache Restaurant. I was really excited when we received an email the morning of the class saying that we would be preparing fennel-crusted pork-loin with blackberry chutney, particularly because I love me some chutney! Within the first 15 minutes of the class, the store was filled with aromas that made me want to live there, and the end product was filled with flavor. I really liked that there were only ten people to a class — it made for an intimate setting in which it was easy to have our questions answered. Matt did a great job of making the process easy to understand and sent us home with some of the chutney (!!) as well as the recipe for it, which Dandelion has allowed me to share with you. Needless to say, I will be going back, and recommend you try it!

Can you believe that there will be a fourth season of “Homeland” on Showtime? Didn’t Brody get killed off? Who will supply the sex? The tension? Will it be nothing but running and bombs and crazy Carrie? Homeland was such a great show in its first two seasons. Third, not so much. But! Maybe there’s life after Brody. See the trailer at Vanity Fair. — Leslie Peacock