The Museum of Fine Arts Boston’s exhibition “Jamie Wyeth,” described as the first comprehensive retrospective of the artist’s work, will travel to Crystal Bridges Museum of American Art next year, artnet reported earlier this month. Here’s what the MFA Boston says about the show:

The first comprehensive retrospective of artist Jamie Wyeth (born 1946) will examine his imaginative approach to realism over the course of six decades, from his earliest childhood drawings through various recurring themes inspired by the people, places, and objects that populate his world. A member of a family of artists — including his grandfather, Newell Convers “N.C.” Wyeth (1882–1945); his father, Andrew Wyeth (1917–2009); and his aunt, Carolyn Wyeth (1909–1994) — Jamie Wyeth has followed a unique path, training with his aunt Carolyn after leaving school at age 11, studying anatomy in a New York City morgue and working in Andy Warhol’s New York studio, The Factory. “Jamie Wyeth” will include approximately 100 paintings, works on paper, illustrations, and assemblages created by the artist, many in a range of “combined mediums,” his preferred term for the distinctive technique he brings to his compositions. The exhibition will feature Wyeth’s portraits of subjects such as his wife, Phyllis Wyeth; John F. Kennedy (commissioned by family members after his death); Rudolf Nureyev; and Andy Warhol; which will be shown alongside a selection of preparatory drawings and studies that offer a window into the artist’s immersive approach to portraiture. The exhibition will also feature landscapes of the worlds he inhabits in the Brandywine River Valley (between Pennsylvania and Delaware) and the Midcoast of Maine — especially the islands of Tenants Harbor and Monhegan — still lifes of pumpkins (a fascination from his youth) and the many animals and birds that are part of his family and surroundings. Organized by the MFA and accompanied by an extensively illustrated catalogue, the exhibition will travel to three additional venues.

A slideshow on the MFA Boston website shows examples from 1963 through 2012, an evolution from realism to impressionism. A hardcover catalog on the retrospective includes an essay by former CBMAA curator David Houston, who has moved on to the Bo Bartlett Center at Columbus State University in Columbus, Ga.

The show will run July 23 through Oct. 4 at CBMAA after stops at the Brandywine River Museum of Art and the San Antonio Museum of Art. The Times will surely take a busload up to see the show with yours truly. 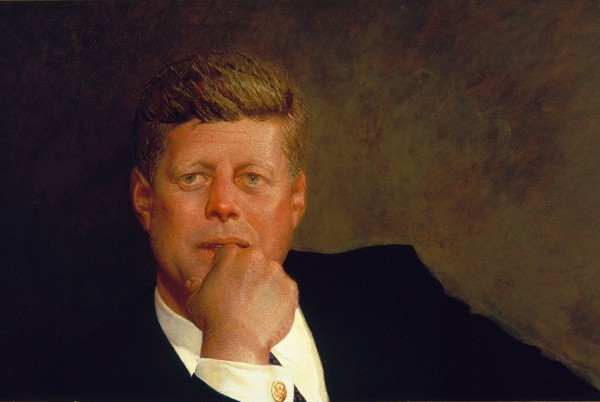 Artnet’s story focuses on Wyeth’s “Portrait of John F. Kennedy,” painted four years after the president’s assassination. From its story:

Though the artist never met Kennedy in person, Wyeth extensively studied biographies, photographs, and film footage of the late president (including the infamous Zapruder film capturing Kennedy’s assassination) for months before beginning his work. He even joined JFK’s younger brothers, senators Robert and Edward Kennedy, on the campaign trail to pick up on shared family traits and mannerisms.

Creating the portrait became a two-year project for the 20-year-old artist, with countless preparatory drawings. “I wanted the President’s face so engraved on my mind that I could place him in any situation I wanted,” Wyeth said in a 1968 interview with LOOK magazine.