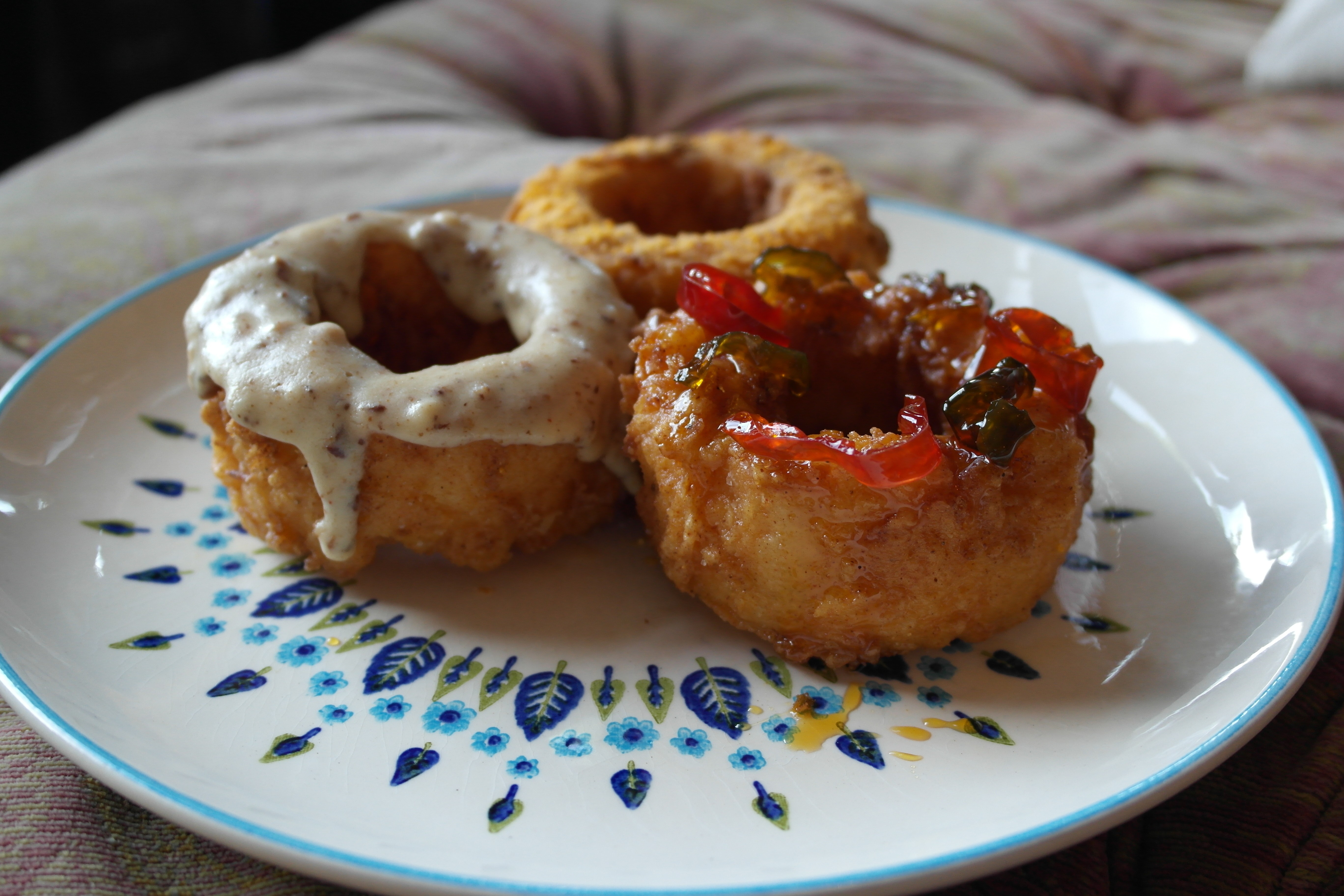 Last year, some of the more talented Arkansas foodies took to tweaking a childhood favorite food, the humble Totino’s pizza. The results were wonderful, and some seriously impressive dishes were submitted. Recently, we held another food hack competition, taking another childhood classic, Kraft Mac & Cheese, and turning it on its head, creating something entirely new and unique. Again, the results were pretty awesome. The rules were simple: Use a whole box of mac and cheese, both noodles and cheese powder, and turn it into any sinister monstrosity imaginable. We had a vote via the Eat Arkansas Facebook page to crown a winner. Here’s what was submitted:

Matt Lowman’s “Mac & Cheesy-nuts” (pictured above)- Mac and cheese doughnuts, battered and fried, one has been coated in cheesy powder, one is gravy glazed, and one is pepper jellied. Matt is the pastry chef at South on Main. 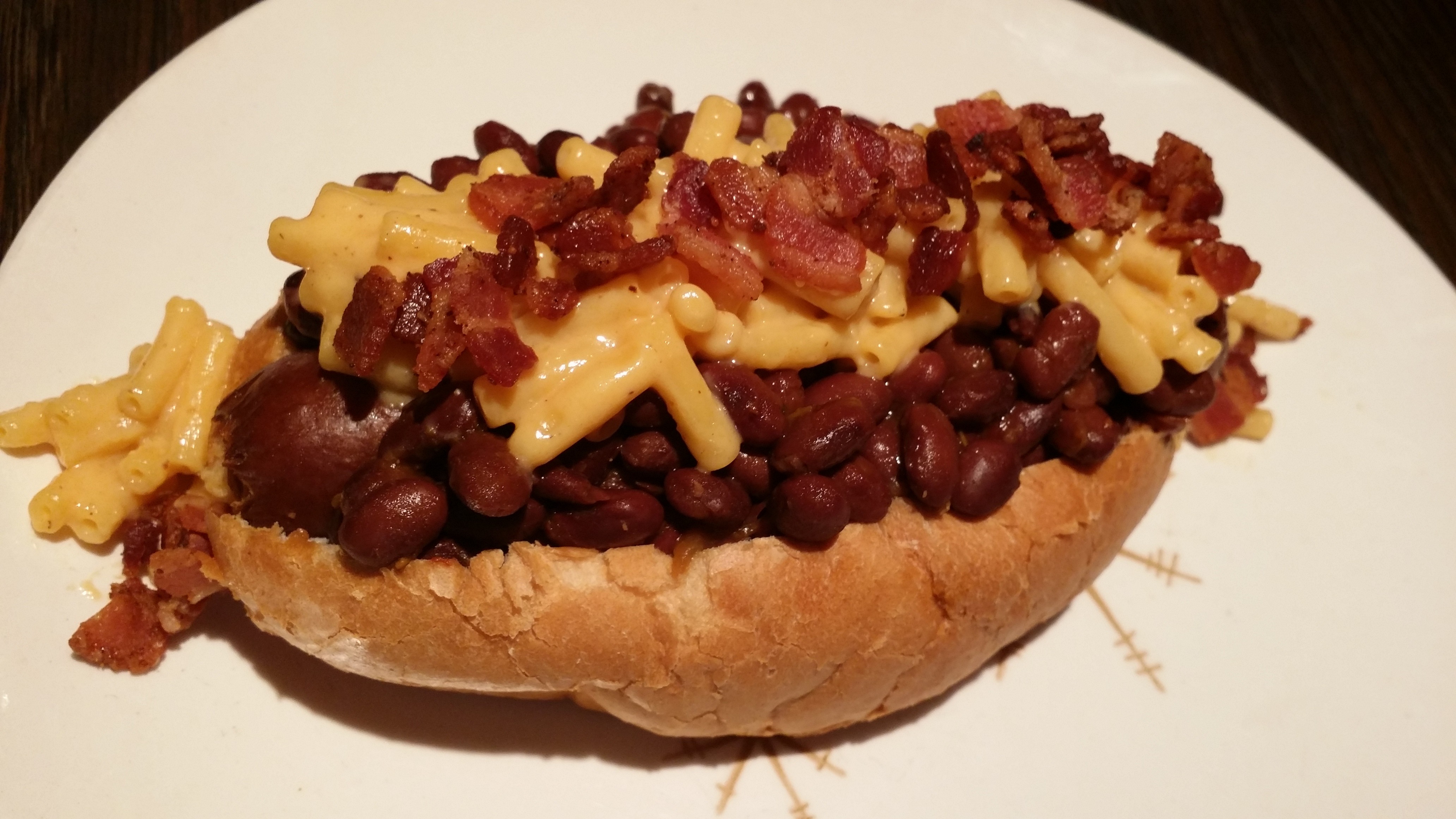 Hot Rod Wieners’ “The Rambler Classic” – Grilled all-beef frank on a toasted, fresh baked roll smothered in smoked brown sugar navy beans, with homemade roasted pepper hot sauce. A beautiful crown of Kraft macaroni with homemade nacho cheese sauce rests upon the bronzed foundation which is then lovingly topped in applewood smoked bacon. (Note: They did use the entire packet of cheese powder in the rue.) 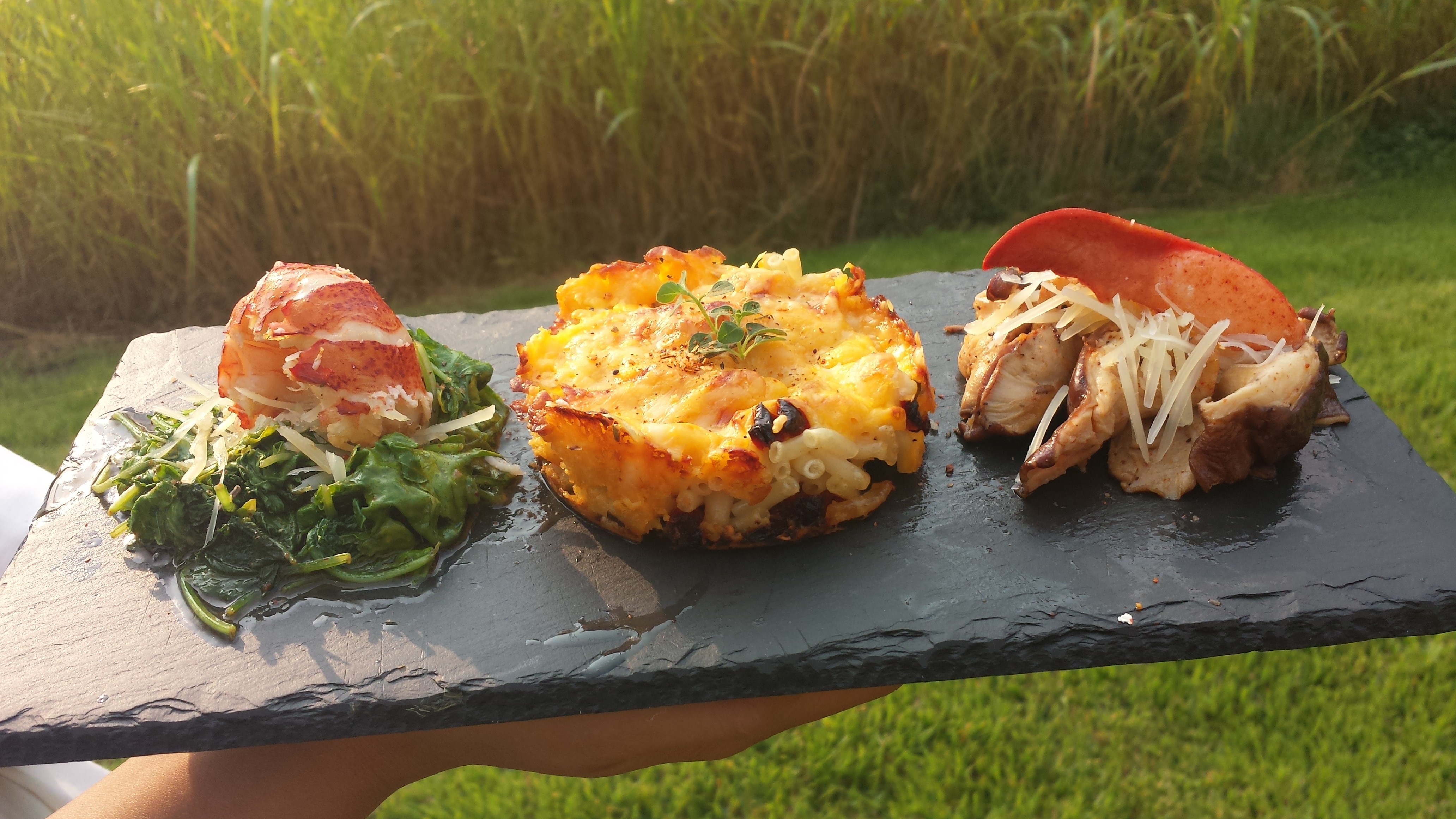 Philip Schaff’s “Mac & Cheese Dog” – He loaded sausage casings up with Kraft Mac and cheese, linked them up, and poached them off to be able to get a nice sear on them, then smokes them. The best way he found to serve these was wrapped in bacon with homemade pickled jalapeños. Philip is the sous chef at South on Main. 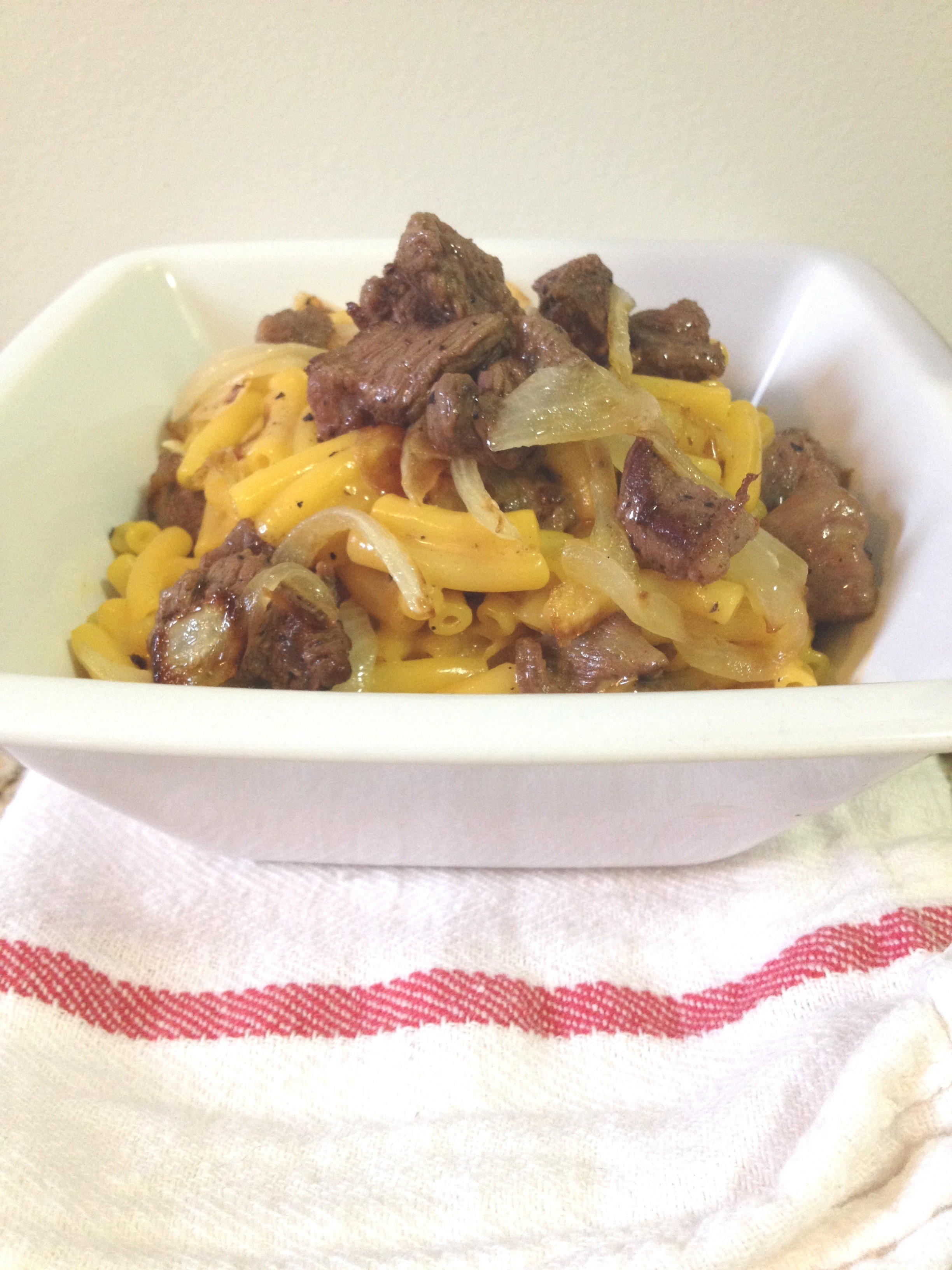 Erin Robinson’s “Wiz & Wit” – In her own words: The Wiz? Extra American cheese melted into the pasta cheese sauce. The Wit? Perfectly sautéed onions. Lastly, season & sauté sliced steak and allow it to rest off heat. Combine the cheesy pasta, onions, steak & black pepper. To ensure the perfect taste of cheesesteak in every bite, you must mix in any liquid left from resting the beef. Even better if its served with a Lager. (Mine was just off camera). Erin is a fellow foodie and ex-Arkansan, now in Philadelphia. 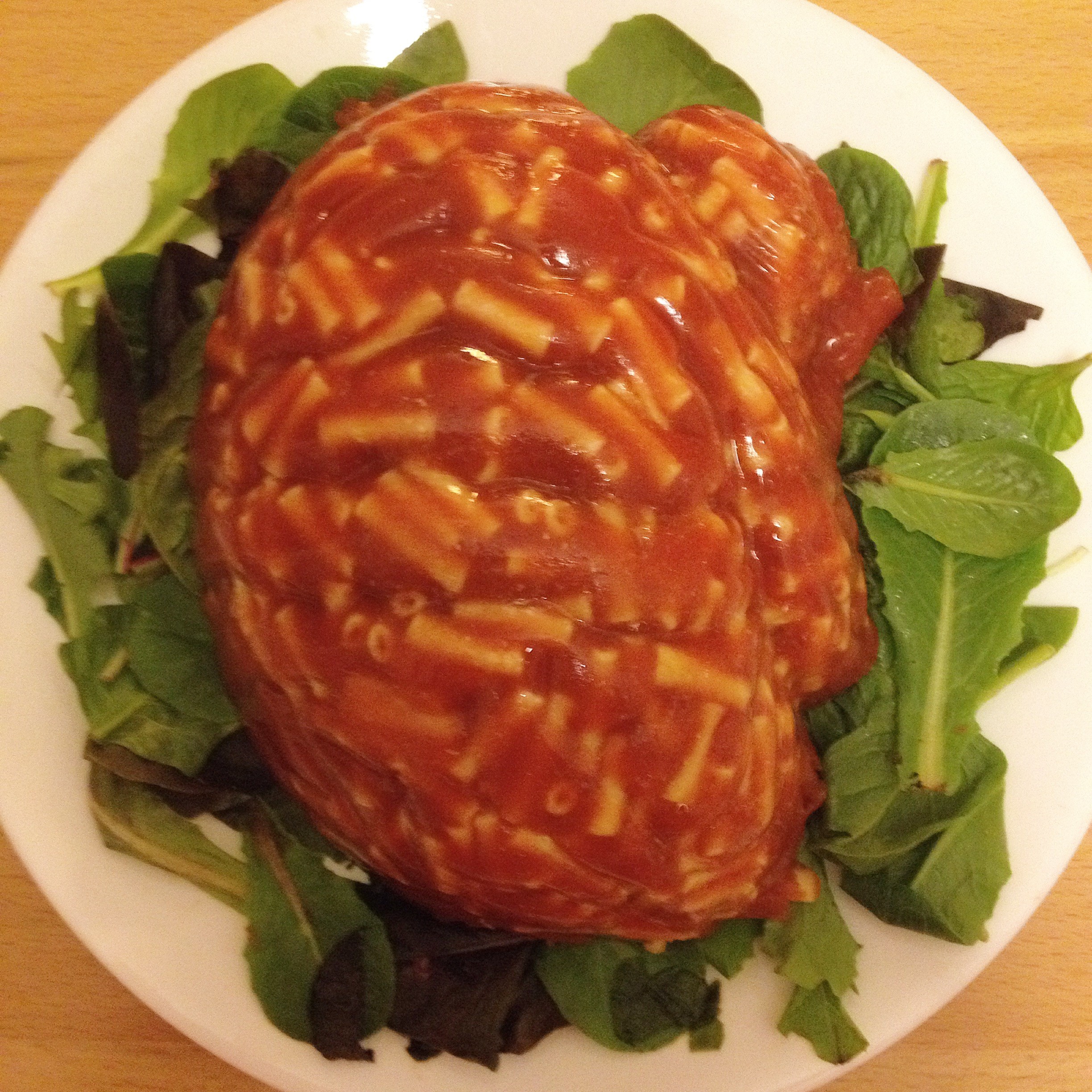 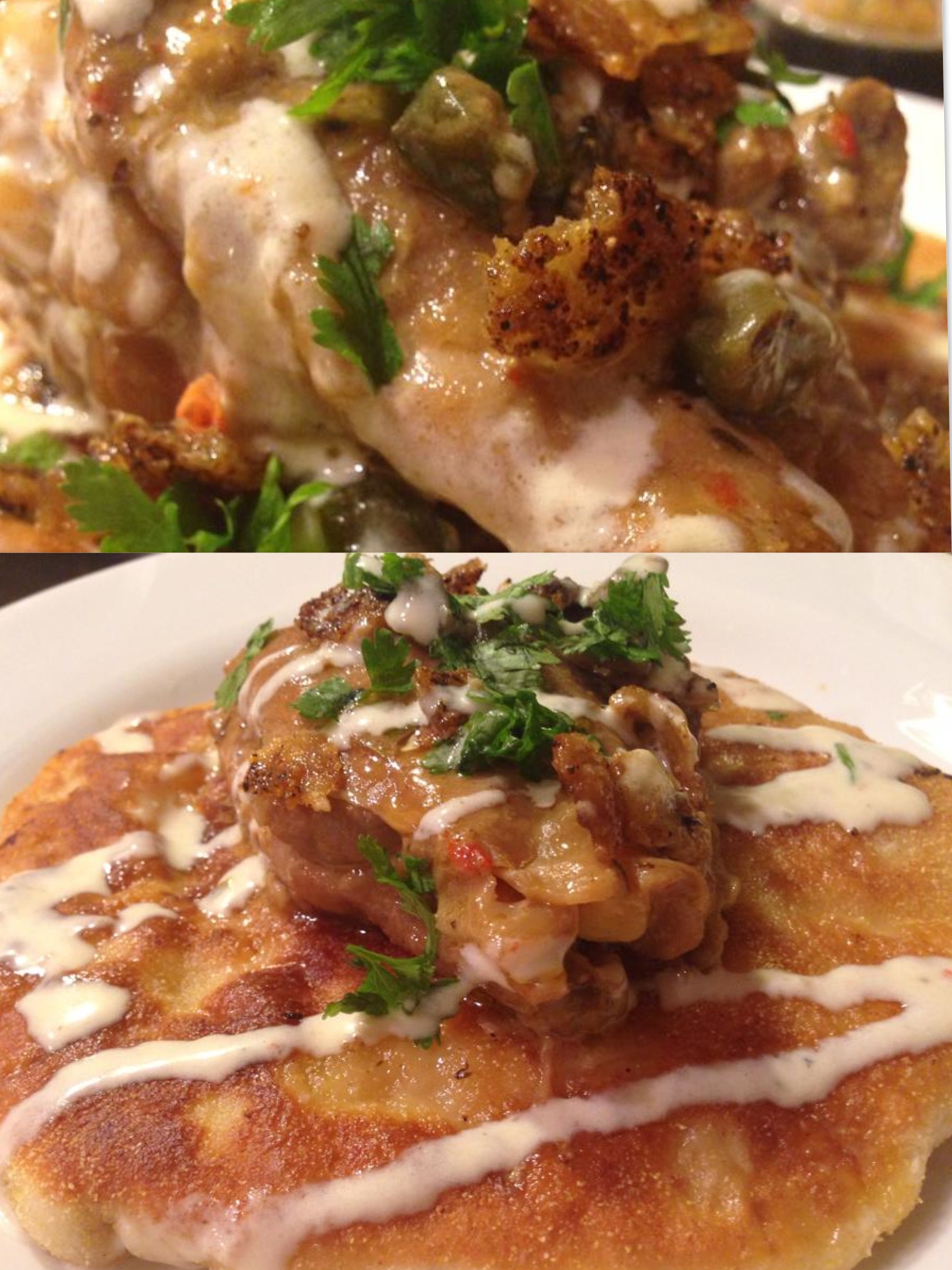 Zara’s Abbasi Wilkerson’s “Mac n’ Cheese Pupusa” – Mac n’ cheese, cooked and then mixed with the masa dough, then fried, topped with braised green chili chicken, poblano crema, cilantro and crispy chicken skin bits. Zara is the pastry chef at Natchez. Zara’s entry was the winner in our contest. This is her second win, as she also took home the victory in our last contest, the Totino’s pizza throwdown. 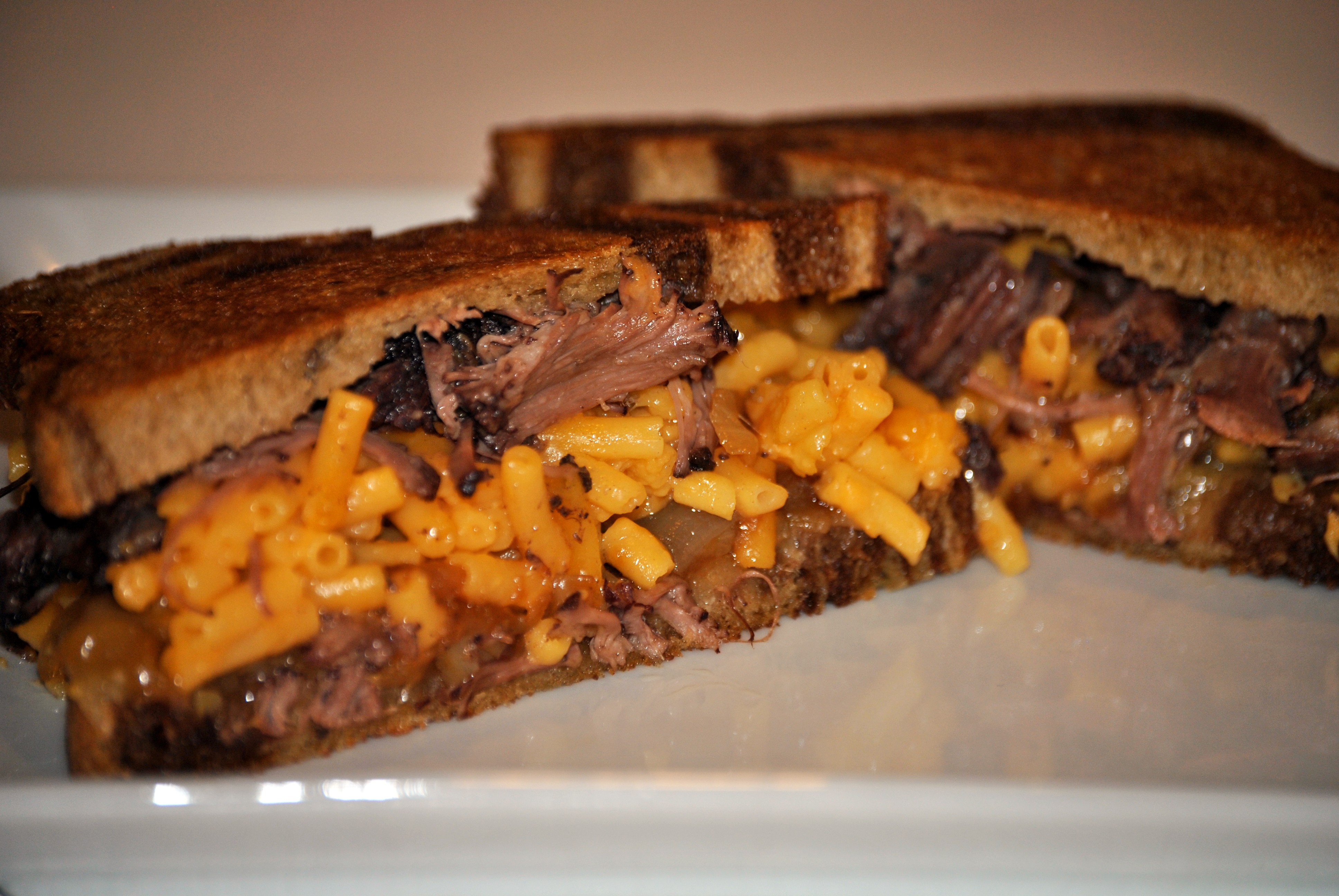 Steve Shuler’s “Grilled Mac & Cheese Sandwich with Braised Oxtail and Caramelized Onions” – Mac and Cheese according to box instructions, then added Gruyere and white cheddar. He spreads the macaroni in a large pan and set it in the fridge to cool overnight. The next morning, the oxtails were braised in red wine and beef stock with mirepoix (onions, carrots, celery) for about eight hours. The onions were sliced thick and sautéed over low heat until soft and a rich brown, about an hour. He shredded the oxtail, then cut out a square of the now-solid macaroni and cheese. The oxtail, mac and cheese patty and onions all went on Arkansas Fresh rye bread and were cooked grilled cheese-style. Steve is the brains behind the Little Rock Foodcast. 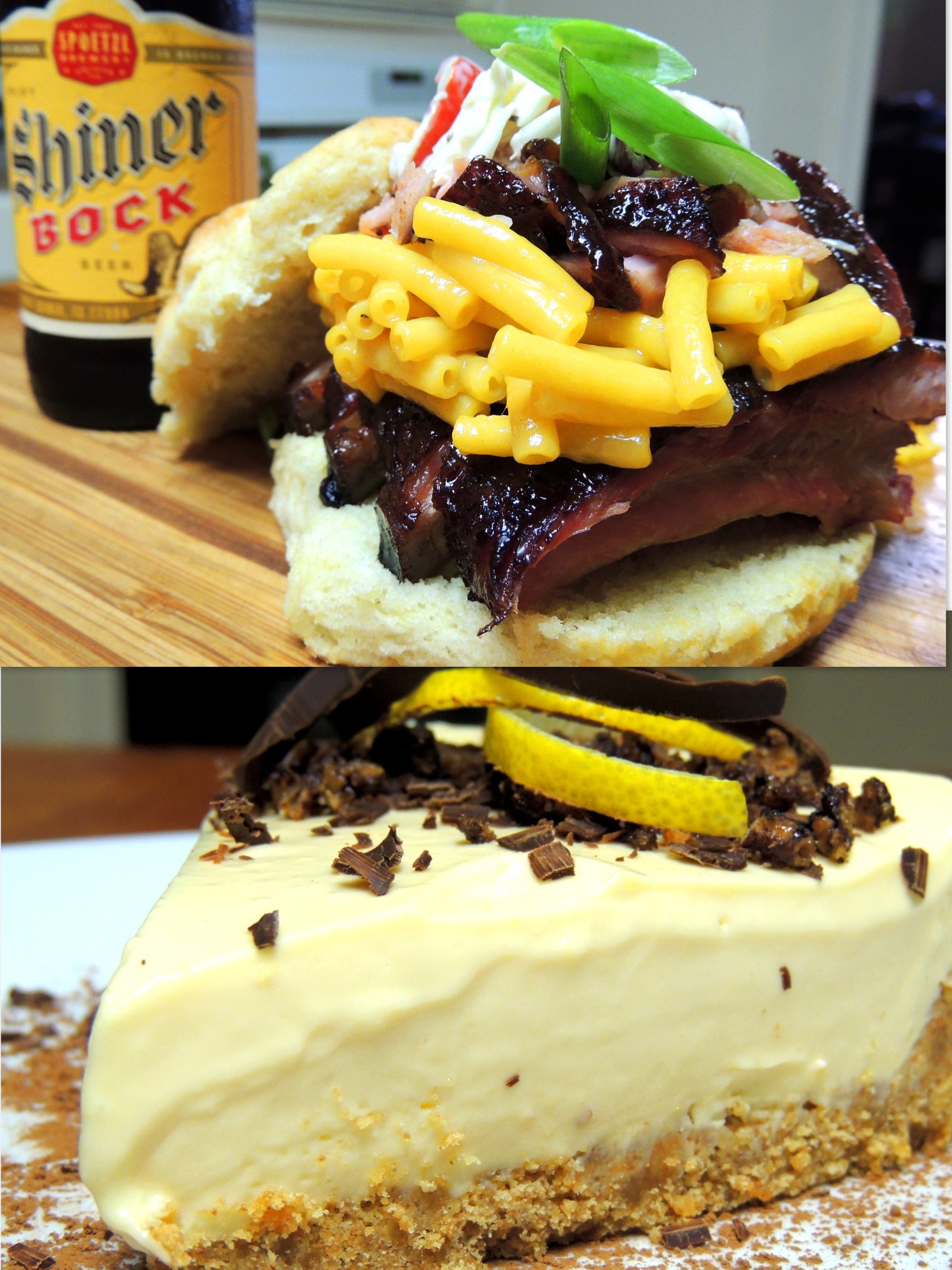 Ken Dempsey’s “Mac’wich and Mac n’ Cheesecake” – The sandwich is made from homemade extra-large buttermilk biscuits, cherrywood-smoked baby back ribs with homemade BBQ glaze, Kraft Mac & Cheese with applewood smoked cheddar, creamy vinegar slaw and green onion. The cheesecake is made from a honey graham cracker crust, lemon cream cheesecake filling with Kraft Mac & Cheese-cheese packet, fried chocolate macaroni crumble and shaved dark chocolate. He says, “It is an all American meal!” Ken is the chef at E’s Bistro in North Little Rock. 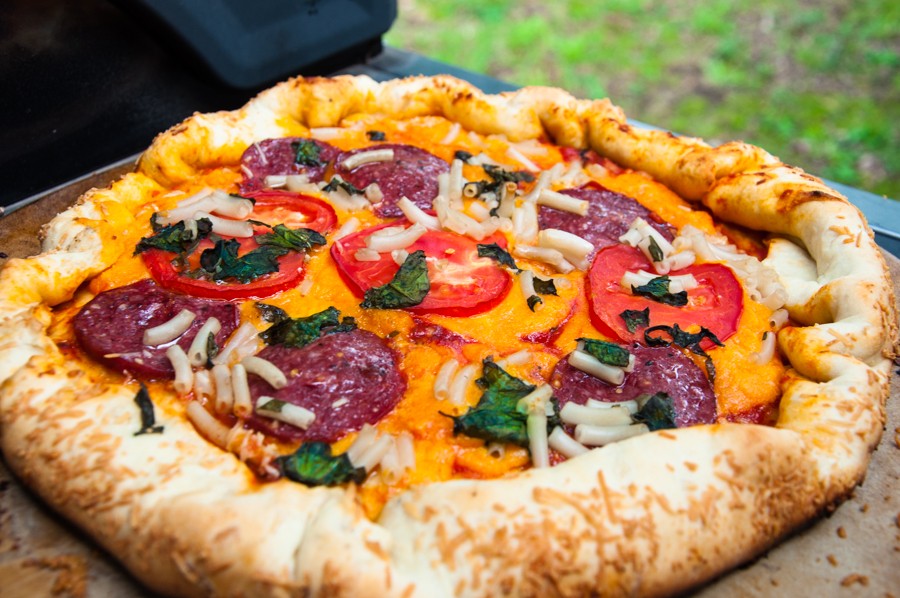 Greg Henderson’s “Mac & Cheese Pizza” – He cooks and mixes pasta in the dough, tops it with a creamy powered cheese sauce, basil-infused macaroni, and sausage, then cooks it on the grill. Greg is man behind Rock City Times and the food blog, Rock City Eats. 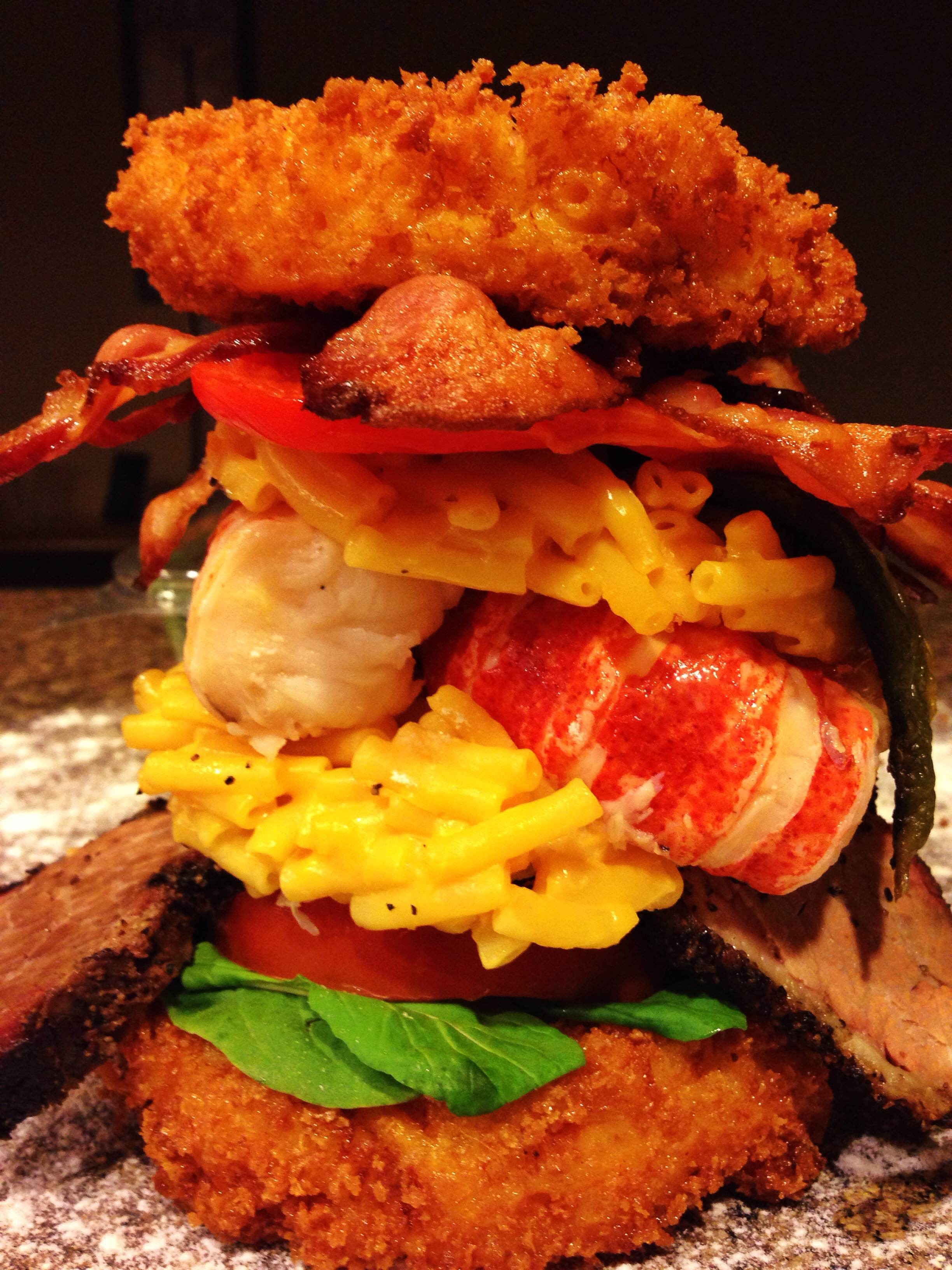 Louis Vasquez’s “The B’Austin” – Lobster mac n’ cheese topped with Texas fatty brisket, charred peppers, and bacon, a top of a fresh tomato and arugula all in between fried mac n’ cheese. Louis is an ex-Arkansan, now in Austin, and all-around great guy. 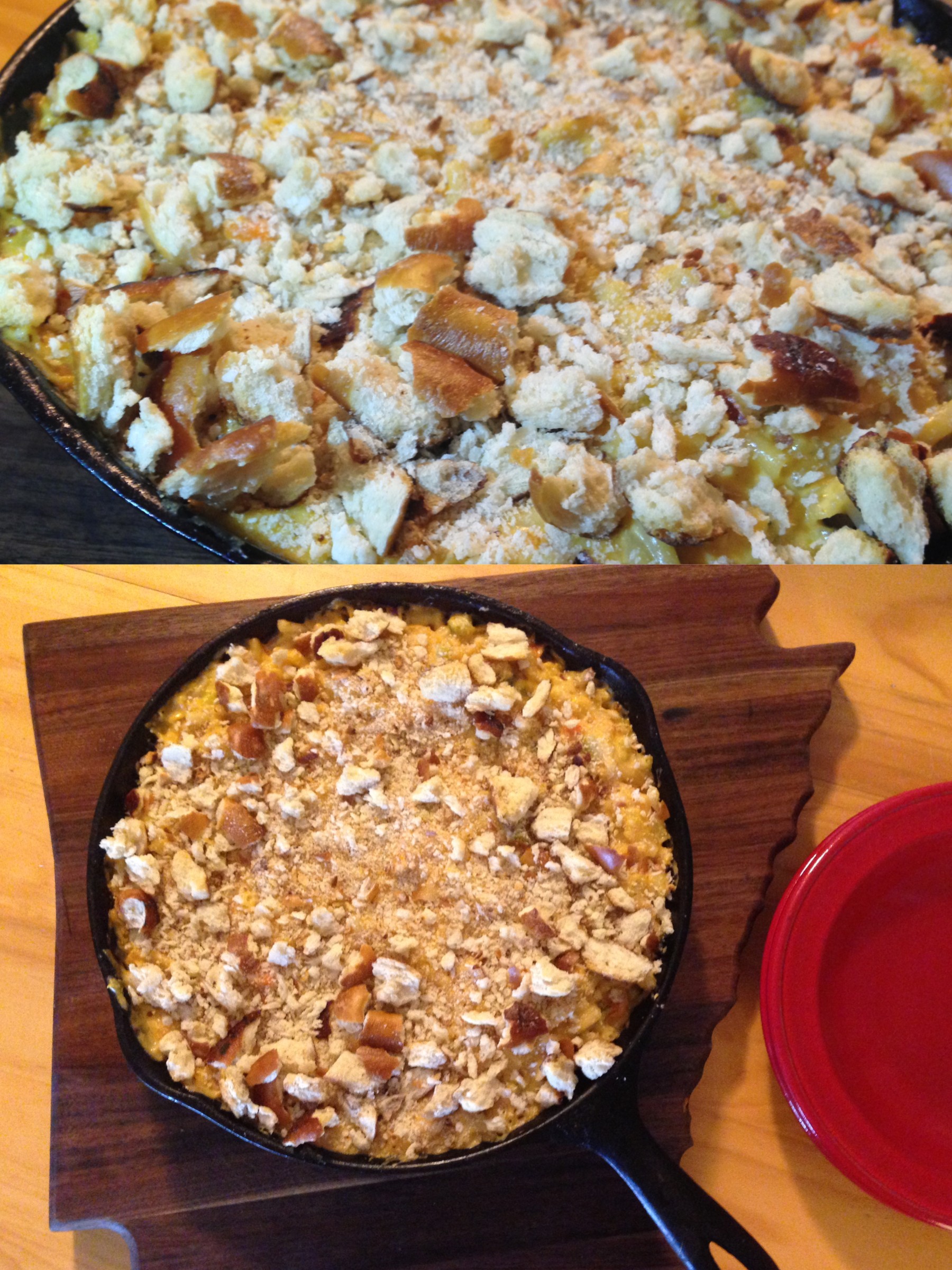 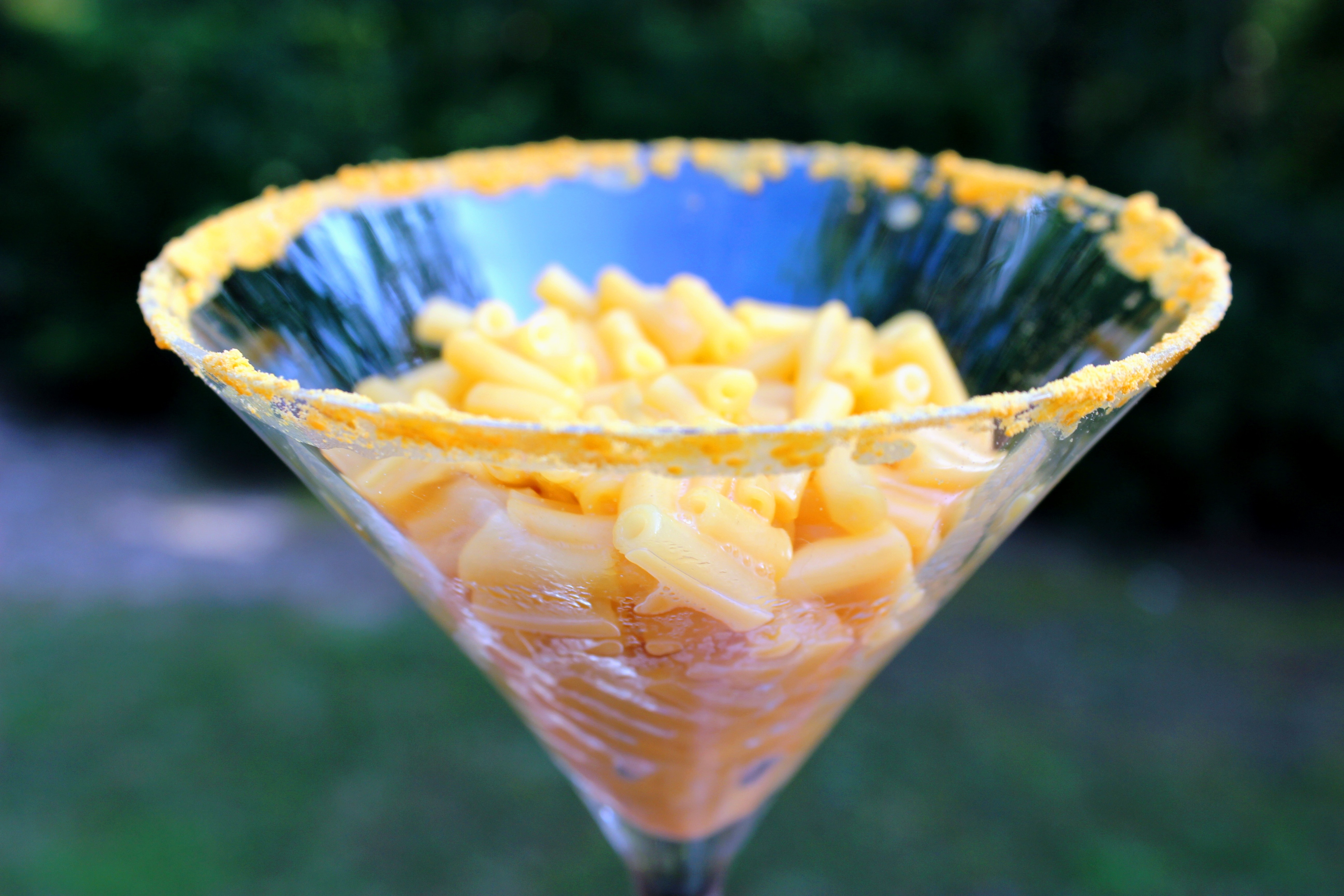 Kevin Shalin’s “Macatini” – This classic macatini is served straight up in a cheese powder-rimmed glass. Kevin is a food writer who authors his own blog, The Mighty Rib, and also contributes to Eat Arkansas and Rock City Eats.

We’ll be doing another one of these food hacks in early 2015, so if you’d like to enter next time, keep an eye on our Facebook page for details.