A wise Cypriot once told us that any restaurant that can last in an out-of-the-way location must be doing something right. Toad Suck Buck’s has been operating for just over 7 years now in a spot tucked-in beside the Arkansas River about 15 minutes west of Conway. You are going to want to use your GPS to find it the first time you go, but once you do, you will find that you are not alone. It might be in the middle of what counts to Little Rockers as “nowhere,” but it qualifies as a neighborhood joint. The difference is that out here the distance to your neighbors is not measured in blocks. 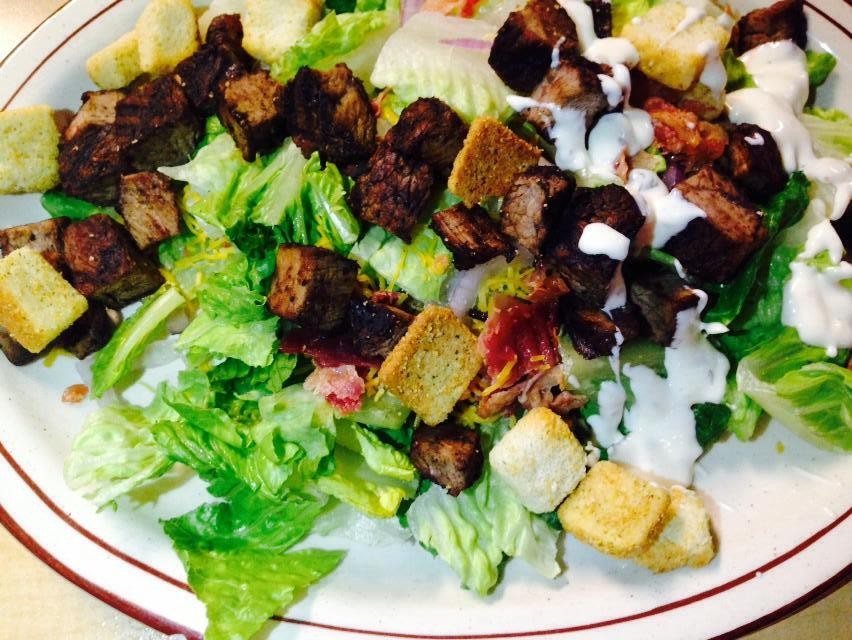 Toad Suck Buck’s sits in a converted shed on the same property where the owners live. On a recent Saturday night, we pulled into quite a scene. Cars and trucks were parked on any flat spot they could find. Folks sitting outside were watching the night’s musical entertainment get set up. Patrons on the inside were sitting in booths and tables that also happened to surround two pool tables, a shuffleboard table, and a salad bar. We were a little squeamish about the salad bar at first, because a friend who lives in Bigelow told us that it was “a little sketchy.”

Huge white boards hung on posts near the bar/cashier area to let you know how many of each cut of steak were still available for the night. Another board let you know what the specials were each night Wednesday through Sunday.

There were a couple of rules that were very prominent here. First, no profanity. They are serious about this, and let diners know with multiple signs. The second rule is to please be patient with the kitchen, and don’t get in a hurry. What we saw certainly told us that the kitchen and the entire staff were working hard. The kitchen staff would occasionally step out for some relief from the heat, sporting sweaty t-shirts and bandannas. The wait staff ran all night long bringing food, drinks and big buckets of ice cold beer to patrons.

The menu features some really interesting starters: Yeast Rolls with a cup of Gravy ($4.95), Spicy Green Beans ($5.95) and Fried Dill Pickles ($5.95) were among them. We settled in on Fried Green Tomatoes ($5.95) and Pepper Jack Mac&Cheese Bites ($6.29). The Cheese bites were interesting, but the tomatoes were exceptional. There was a spiciness in the extra thick layers of breading that really made this dish work. Paired with some ranch to dip it in, 6 of these Tomato slices for $6 seemed like a good bargain. 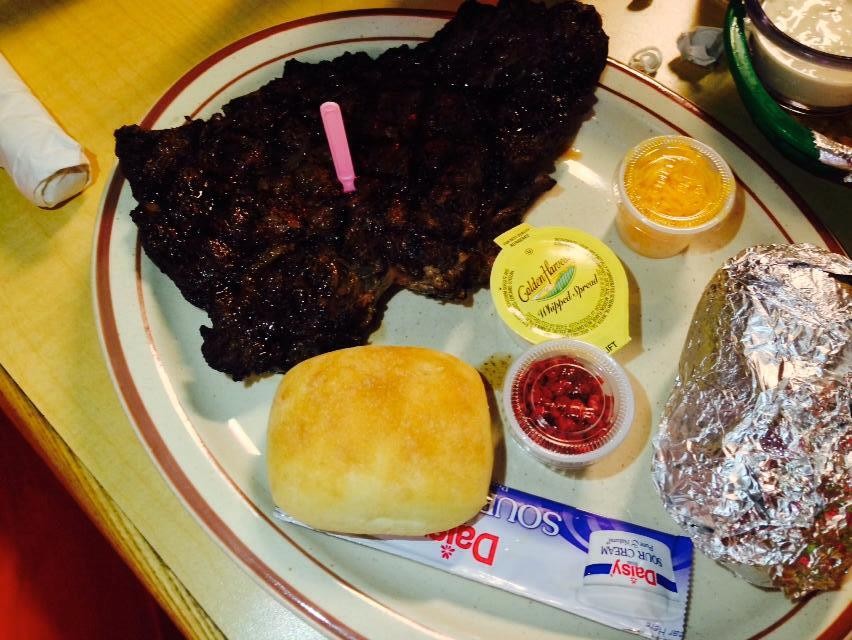 The entree selection consists of a lot of steak, chicken and shrimp options plus burgers, sandwiches and salads. We went with the 16oz Ribeye ($26.95), Catfish Dinner ($13.95) and Michele’s Sirloin Salad ($10.95). That salad is topped with 8 ounces of sirloin and makes for a very substantial meal. The 2 catfish filets were huge and came with fries, hush puppies and a trip to the salad bar. The fried catfish was sublime, with just the right amount of seasoning in the breading. It was light and fluffy, which we think had something to do with the rice bran oil they use. It turns out that the salad bar is not “sketchy,” just paired down. It offers iceberg lettuce, shredded cheddar cheese, diced tomatoes, bacon, dressing, and nothing else.

From the time we walked from the truck to the restaurant, one of us knew we were ordering a steak. The smell of the meat cooking on their grill wafted through the air and pulled us in. Fond memories of grilled steaks from the past rushed to our minds—the only question was going to be what cut of meat and how big a cut. We ordered the Ribeye medium rare and it certainly was. A bit of gristle was taken off one side but overall this was an excellently seasoned and prepared steak. It came with a choice of fries or a baked potato plus a trip to the salad bar.

One of the things we love about Arkansas is that places like Toad Suck Buck’s are everywhere, tucked into corners you wouldn’t know to look for unless you’re a local. It’s clear the folks who live around the Stony Point area of Perry county think they have a gem in this place, and they might be right.