After three months of remodeling, the Capital Hotel is reopening its flagship restaurant today, August 8, under the name of One Eleven at the Capital. More has changed about the place beyond the name — One Eleven features a newly renovated dining room and an overhauled kitchen that reflect Chef Joël Antunes’ vision of a more contemporary, modern menu in a setting that is still elegant enough to be worthy of the legendary space it occupies.

I was fortunate enough to attend a tasting last night that featured dishes from One Eleven’s dinner, dessert, and new bar menus — and I’ve got to say, I was impressed. Dishes were simple, with attention paid to making sure each flavor worked together, and the high quality of ingredients was apparent in every bite.

The new place looks great. Ashley’s always seemed a bit dark to me, but the new space is light and open, with a beautiful zinc bar greeting diners immediately as they enter the restaurant. Gone, too, is the partition that divided the dining area in half — the new dining room is far more open, with a good flow and energy to it accentuated by a light color scheme and fresh artwork on the walls.

As for how the new restaurant concept will work, Antunes has scuttled the long-time prix fixe model in favor of a less rigid al la carte menu. The new lunch menu features dishes in the $15-$25 range, a price point that marketing director Chuck Magill said was intended to turn One Eleven into a place that downtown workers felt like they could eat at more than just once in a great while. The dinner menu, too, is intended to change the “special occasion only” reputation of Ashley’s by keeping dishes in the $25-$45 range — certainly in line with other high-end restaurants in town.

In addition to the new lunch and dinner menus, One Eleven will be featuring a revamped breakfast and brunch menu, trading in the white tablecloth dinner atmosphere for a more casual, open setting. Even better, a new coffee bar serving espresso and other coffee drinks is slated to turn the Capital’s central lobby into a hub of activity, developing a caffeinated link between One Eleven and its across-lobby neighbor, the Capital Bar and Grill. 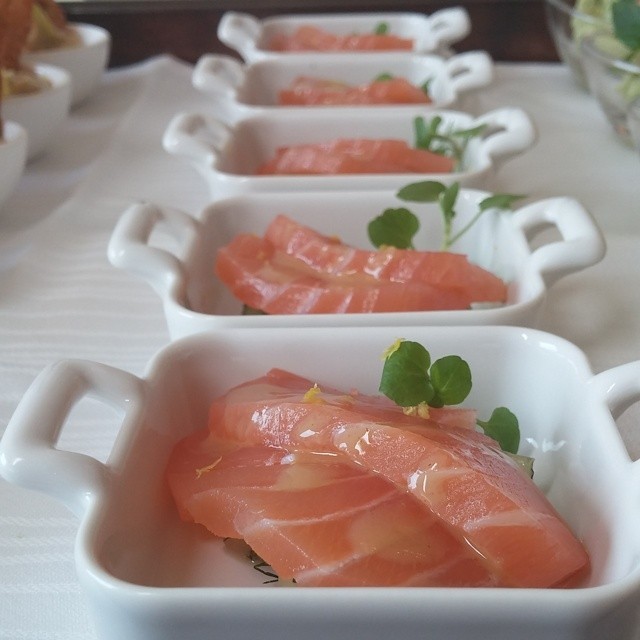 As for the food, it is, in a word, spectacular. We started the tasting with some items from the new bar menu — and folks who like an after-work cocktail and a snack are going to find a lot to love here. A buttery Norwegian smoked salmon had our entire table raving, while dips like edamame hummus and a delightfully tangy baba ganouj are perfect for sharing.

Moving into the appetizer menu, things got even better. The Maine Oysters Rockefeller were a revelation: a poached oyster resting under a blanket of luscious hollandaise that was the definition of decadent. This was followed by a small crab cake served over cole slaw (perfect flavor, with a nice contrast of textures) and a shot glass of asparagus soup that tasted better than any soup has a right to.

Following these excellent dishes, we were treated to a risotto with fresh green peas and black truffle that was one of the creamiest, best versions of the dish I’ve ever tried. A Berkshire pork cheek with pasta and chorizo had the pig-lovers at the table going crazy, but it was the Belle Evans Farm roast chicken that really blew me away — one of the only times that I’ve actually liked the chicken better than the pork (although both were excellent).

Dessert brought a raspberry cheesecake that I predict will become a local favorite, a light, tender chocolate souflee, and a caramel popcorn and ice cream dish that was very unique. By this point, we were all groaning with our gluttony, but we managed to suffer through — you know, in the name of journalism.

The name One Eleven represents a few things: it’s the address of the hotel, the address of Stephens’ headquarters, and it even hearkens back to the original Stephens offices at 111 Main Street. As the restaurant ramps up its new service model, I predict that One Eleven will represent something else: excellence in dining that will seldom be paralleled in the city. Chef Antunes is a star, and with this new opening, he’s ready to start dazzling — his way.