For this week’s cover story, three of us from the Times took a post-2 a.m. tour of Midtown, Electric Cowboy and Elevations to get some pictures and shout questions at strangers over the music. Fortunately, it’s easier to cold-start a conversation with someone when they’ve had 3 or 4 (or 9 or 10) drinks inside them. Unfortunately, although the willingness-to-talk curve goes up relative to the amount of alcohol consumed, the coherence-of-conversation curve moves in the opposite direction. Here are a few outtakes from a mostly sober night of inviting drunks to rant about city politics.

Dear Midtown, diviest of dives, a place as awful as it is essential. I got a beer and scanned the crowd for welcoming faces. There, a round, older gentleman playing pool. He smiled broadly to no one in particular, swaying to the band (which wasn’t terrible, as far as smoke-choked barroom blues rock goes) and waiting for his turn at the table. Surely he’d welcome a chat.

“Hey,” I said, sidling up to him. “I want to ask you a question. Have you heard about this new city ordinance?”

He threw his arm around my shoulders and danced with newfound vigor.

He tapped his cue against the floor in time to the beat, heaving me from side to side. Glowing with some secret pleasure, he grinned from ear to ear.

“What do you think about that?” I yelled into his ear, clasped in his embrace.

He laughed and laughed, clapped me on the back fraternally, and walked away to take his shot at the pool table.

Didn’t go well, I reported to my friend Brian, who had generously agreed to come along with me for the night. What next?

“You could always try that guy,” he said, pointing, “the ogre.”

The ogre is a smallish, raggedy man I began noticing around town after one evening last winter in which Brian and I watched him and two other dudes relentlessly heckle Stephanie Smittle at the Joint. It’s hard to imagine a more taciturn venue than the Joint, a softly-lit coffee shop in North Little Rock, or a less heckleable band than the Smittles. They consist of four aging rockers and Stephanie, a college acquaintance of mine who’s a young opera-trained soprano with a wide-open smile and a radiantly warm personality. They mostly play gentle, folksy music, as sweet and burnished as a Werther’s Original. Not really my thing, normally, but I’d been wanting to see Stephanie perform and it turned out to be really lovely; I think Brian and I were the only people in the crowd that night under fifty. And then, halfway through the set, this trio of drunk guys invaded the place. They sprawled out at an empty table — guffawing, shouting lewd suggestions to the stage, knocking over glass beer bottles to spangle noisily against the concrete floor. They talked during all the songs. They whooped and hollered and laughed at the chill radiating from the other tables. Imagine three criminals busting into your living room on a cozy winter evening and throwing your mug of peppermint-flavored cocoa into the fireplace — that’s what it felt like. They were vandals, Morlocks, ogres. Stephanie and her band suffered through the rest of the set, visibly pained, and eventually the three of them stumbled off to ruin someone else’s night.

In the months since, I kept glimpsing the ogres around town everywhere — at bars, house parties, shows. Especially this one guy, with long, dirty-blond locks and wild eyes and a sort of intentional grime about him. Of course he was there at Midtown at 2 a.m. gulping down beers. It would’ve been genuinely surprising if he hadn’t been. Well, why not, I thought.

I walked up to him. “Hey,” I said, “Let me ask you a question.” He turned his bloodshot eyes towards me. Had he heard about this proposed law, I inquired? Yes, he had. What did he think about it?

“I think it’s fucking bullshit,” he shouted at me, spraying spittle in my face.

There was then a lengthy pause as I realized then that I didn’t have anything else to ask him. This is why not, I thought, because a second-grader could have told you this is not a person you should approach in search of a sympathetic quote.

His eyes lit up with enthusiasm. “Oh YEAH, man, I’ve seen some crazy, crazy shit go down here,” he exulted, and launched into a vivid description of several things that pretty much confirmed the worst possible image of Midtown in the eyes of the city.

I thanked him and moved on, finding greener pastures with a tableful of tipsy but coherent (and suitably outraged) workers in the service industry who laid out a half-dozen cogent points for why Midtown should stay open til 5 a.m. Upon reflection, though — of course it’s true that drunk guys looking for trouble are simply a part of what Midtown is. If you want to stay up all night and get wasted, Midtown gives you that option in a place that’s contained and relatively safe. Door staff is checking for weapons. Security is everywhere. If you get too wasted to stand up, you’ll be cut off at the bar. Even an ogre needs a place to get a drink. 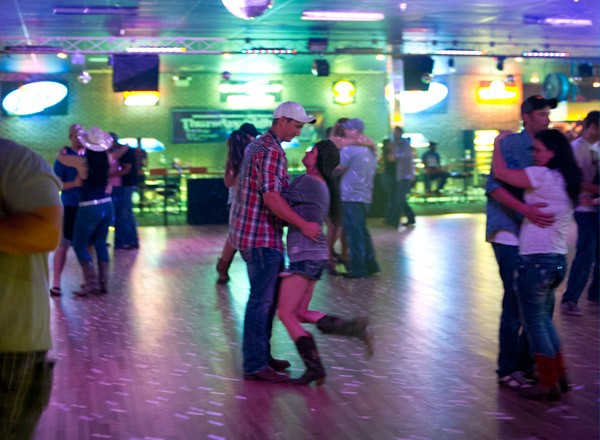 Onward. As we stepped out of the car, we found a single white sandal sadly stranded on the asphalt of the Cowboy’s parking lot, its mate presumably having run off for a regrettable night with another shoe.

Midtown is a blur of smoky dimness splashed with hot blobs of incandescent yellow. The Electric Cowboy, in contrast, is continually bathed in two alternating waves of color — hot pink and highlighter blue. It’s a weird place, country and urban and neither. A wide open, wood-laminate dance floor sits in the middle of a vast expanse dotted with tables.

Three small, glowing bars hover on the fringes of the tabled area, detached from the wall, party barges bobbing through a man-made lake.

I found myself indefinitely perambulating around the expanse of tables, circling the dance floor again and again. I watched a woman doing the Cupid Shuffle; one person removed from her in the line, there was what looked like the same woman aged approximately forty years. Being relatively unintoxicated (one drink per club, I’d told myself) and here on a Righteous Mission, I felt an irrational stab of agape love for all of them — and I hate the Cupid Shuffle.

I approached a table of four young, poloed dudes with a vague post-frat air about them.

“Hey. Guys. Can I ask you a question?” They stared at me for a second before consenting. “Any of you heard about this new ordinance to shut down the late-night clubs?” They had heard of it. They didn’t like it. One was even sober enough to talk about it.

“What do you guys do?” I asked, pulling up a seat next to the relatively sober one.

“Ignore him,” said the relatively sober one, who was earnestly attempting to make the argument about why closing 5 a.m. clubs was unfair to service workers. “But yeah, seriously, he is,” he added.

I talked to the relatively sober one for awhile longer and got some good quotes before we were interrupted by another one of their companions, a large man with dark brown skin and a shaved head.

“Hey. I have a quote for you. You want a quote? You write this down,” he said. He then bellowed some word at me that sounded like “whores”, though it was too incoherent to tell for sure.

“Ignore that! Ignore him! Don’t write that down!” pleaded the relatively sober one, who seemed genuinely distraught.

But I wanted to know more. “What do you do?” I asked the large man.

“When I was growing up in Cuba, my parents owned a mortuary, so I had some experience.”

“This is the most interesting man in the world,” said the large guy, with evident pride. 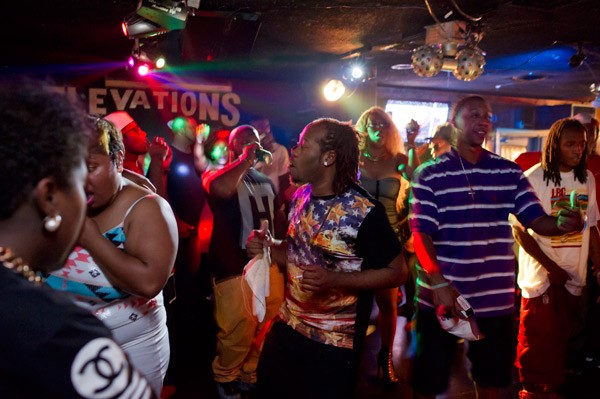 I’d be lying if I said that I didn’t feel self-conscious walking up the steps to Club Elevations with my fellow Times reporters. They’re two white guys in their 40s and I’m half-white, half-Asian; Elevations caters mostly to a black crowd. It should be noted, though, that there were probably as many white and Latino people speckled throughout Elevations, per capita, as there were black people at Midtown. But, of course, we don’t notice a majority-white crowd in the same way we notice a majority-black crowd. As it always goes in such matters, Midtown isn’t a white club. It’s just a club. Elevations, though, is a black club. Because black is black, but white is simply normal.

We got some questions at the door from a couple of young guys. Not hostile, but a little suspicious about the cameras. What exactly were we up to, he asked?

“OK,” said the young guy, cocking an eyebrow, “and why did you choose this particular club?”

People were stacking up behind us in line and the woman working the door had enough. “You be quiet,” she commanded the young guy. “Come on, come on, get in here,” she barked at us.

In terms of overall ambiance, I think Elevations was the most inviting of the three places we visited. Not as garish as the Cowboy. Not as desperate as Midtown. Lots of dark wood in the interior, low ceilings — if you removed a couple hundred people, it would have had the feeling of a classic basement rec room.

I pressed my way to the bar for my last beer of the night. It was past four. As I waited for a foothold of barspace to open up, I found myself standing directly behind a thirtyish woman with long braids and a leopard-print skirt, gently bobbing to the bass thump. We made eye contact in the wall-length mirror mounted behind the bar, just for an instant, and immediately her lower half began amiably, experimentally bumping against mine.

I’ll be honest, everybody. Grinding has never been one of my strong suits. Nonetheless, if I’d had twice as many drinks in me I should hope I would have at least tried to reciprocate. As it was, I was mostly sober, and exhausted, and technically working, and the fact that that I was looking at my own face in a well-lit mirror didn’t help anything.

I placed my hands firmly on her shoulders and leaned in close to her ear. “Hey. Excuse me. I want to ask you a question,” I said.

“Yeah?” she said over her shoulder, her hips pushing back against me in rhythm.

“Have you heard about this new city ordinance they’re proposing?”

“…what?” she asked, finally turning her head to look at me, sideways. It wasn’t a pleasant look.

“Ah. Um,” I said, suddenly realizing I had unintentionally trolled her. “The city of Little Rock is trying to shut down all the late night clubs. They want to close them down at 2 am. And. You know, well, that’s, that’s…”

She snorted and took a swig of her drink. “Not this club,” she growled, and walked away towards the dance floor.