A crowd of about 60 (impressive for a Monday night) gathered at the Rev Room Monday night to be collectively slain by Shabazz Palaces’ deadly combo of droning bass, carefully layered sonic textures, live polyrhythmic percussion, and sharp rhymes. It was a flawless victory.

I’ve been a fan since I came across their first album a few years ago, and I was ecstatic to see them. I’d always thought of them as perfect headphone music, with lots of subtleties and textures to pick up on, but seeing all of it done live exponentially increased my appreciation and admiration for what these guys do as musicians.

The group consists of ‘Palaceer Lazaro’ (aka Ishmael ‘Butterfly’ Butler from 90s Jazz-Hip-Hop crew Digable Planets) on the mic and sampler and Tendai Maraire on percussion and sampled vocals. That last sentence totally fails to capture the incredible amount of things they were doing on stage to produce the show we saw and heard, so I’m gonna dig into the details a bit.

Let’s start with Maraire. He gets more different types of tone and timbre out of a conga drum than anyone I’ve ever heard, playing with hands and sticks alike, sometimes clean and sometimes brutally distorted or soaked in reverb, and with accompanying hits on the octapad (percussion synthesizer). Maraire is a master of the mbira, or thumb piano. He plays a few different types, one with a deze, which is made from a gourd and serves to amplify the mbira. On top of all that, he works the hi-hat as well as anyone this side of Bernard ‘Pretty’ Purdie (Aretha Franklin, Hall & Oates, Steely Dan, countless 70s studio albums)

Maraire also provides ‘backup vocals’ in a sense, with repetitive words or phrases that echo Butler’s lyrics as well as ghostly ‘oooo-woooo’s that he samples live and runs through processors to create oscillating layers of ethereal noise. Butler chips in to help ground all of Maraire’s percussion with heavy and often syncopated bass and beats coming from his own samplers and laptop.

There wasn’t a single moment of stillness, as they both used any time unspent drumming or programming for coordinated dancing and hand motions. The visuals were great. They moved in unison with distinct clothes and shades, wooing the crowd with instrumental wizardry and stylish flair. This is one thing I can’t understate as a concertgoer: never neglect the visuals. We’ve all seen enough dudes in jeans and t-shirts standing in place with their heads down so whenever any group puts effort into presentation, stage antics and looks, I’m all about it. 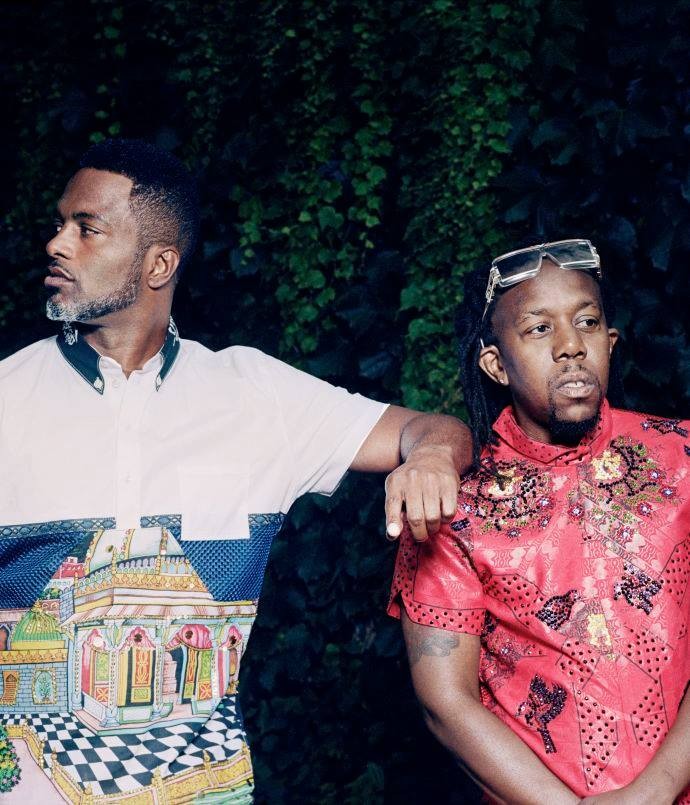 As a lyricist and MC, Butler is both playful and sinister, brazen and self-conscious. If you’re familiar with Digable Planets, forget about them here. The cool, clean, and smooth-sailing style of ‘Butterfly’ is nowhere to be found, replaced by a rougher and wiser ‘Lazaro.’

On my favorite track, “Gunbeat Falls,” which I was thrilled to hear them perform, Butler comments on racial and socioeconomic disparities in how we perceive and enforce theft (i.e. petty crimes vs. corporate shenanigans) and tries to reassert hip-hop’s role as active resistance to the status quo:

There’s complexity in the delivery though, and the way the last line is repeated makes you feel like he’s questioning if that salvation is real or not.

Hearing lyrics like these, it was hard not to be keenly aware that I was part of a predominantly white crowd at a hip-hop show listening to strong words about black empowerment and racial justice. It’s easy to miss the heavy lyrical content of a group like Shabazz Palaces when there’s so much going on musically, but there are messages there, and hopefully their music points more people towards social justice movements.

All that heaviness aside, though, this show was a blast. Most everyone was dancing or at least bobbing and shuffling, and seemed to be having a great time. The energy level stayed high the whole time, and the duo played for over an hour, including an extended encore. Both the group and the crowd and brought their A-Game, and I think everyone there felt lucky to have been a part of something special.

As an end note, I have to admit that I foolishly arrived to the show 20 minutes late and missed the brief opening set from Goon de Garcons, member of local hip hop collective Young Gods of America, but based on what I’ve heard from him, I’ll bet it was great. So, props to Rev Room for getting things started on time and reminding us that we shouldn’t assume that 9:30 means 10:00; props to Little Rock for showing up on a Monday night; and finally, props to Shabazz Palaces for putting on such an awesome and engaging performance.