Read this month's issue
Browse the issue archives
Advertisement
Home Rock Candy WSJ on ‘State of the Art’: Kept soft for the naive among...

Or that’s how you might interpret Wall Street Journal critic Peter Plagens’ review of “State of the Art: Discovering American Art” at Crystal Bridges Museum of American Art. You take a stab at it; here he describes what’s not in the exhibition:

Immediately off the table were in-your-face provocations involving racial, sexual or political identity; inconvenient architectural “interventions” that such exhibitions as the Whitney Biennial suffer gladly; theory-laden conceptual pieces; and, really, any work of art that would be too rough on the walls and floors. In other words, the show was kept to a PG-13 rating in the hope that CBMAA’s viewers—many of whom are first-time museum-goers—might be led somewhat gently into the problematic precincts of contemporary art.

I’m wondering if there are indeed any first-time museum goers left in Northwest Arkansas. I get his point, however; there is no art involving urine or bovine viscera or any of the other media that one might find in a gallery not in smack dab in the middle of the U.S.A. in SOTA. NOTE! I have only seen the checklist catalog of the work, not the show itself, so I’m not really taking issue here with what Plagens’ writes, with the exception of his statement about the  absence of art that addresses racism: It seems to me that Vincent Valdez’ painting “The Strangest Fruit,” about the lynching of Latinos, and Vanessa German’s ceramic mammy “White Naptha Soap or, Contemporary Lessons in Shapeshifting,” about stereotypes, and surely others, fill that bill.

The bottom line, for Plagens’:

The result is a meticulously installed, technically impressive exhibition that looks like the world’s largest university faculty show. (Mr. Bacigalupi estimates that a quarter to a third of the artists in “State of the Art” are college art teachers, and the catalog says that 50 of the 102 are “artist educators” of some sort.) Like professors obligated once every two or three years to demonstrate by example that they know what they’re talking about vis-à-vis craft, composition, color, form, materials, narrative, etc., and at the same time to display a certain amount of inventiveness, most of the artists in “State of the Art” come through respectably, though not stunningly.

Re: Jamie Adams’ “Niagaradown,” Plagens writes, “demonstrates — at least to me — the cold fetishism that can come from being zonked on the Old Masters.” If I knew what that meant, I would wish that I had written it, if you follow me. I was kind of wondering about “Niagaradown” myself. 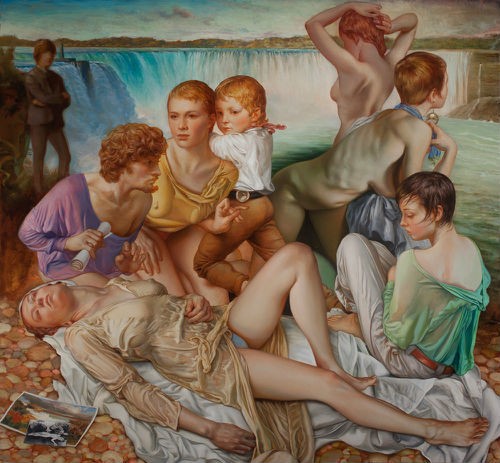 Mr. Plagens kindly wrote Eye Candy to clarify some of his observations. Here are his comments.

Thanks for giving some play to my review of “State of the Art” at Crystal Bridges. No arguments, but some clarifications:

A longtime fan (if that’s not a tasteless term) of Lillian Smith’s novel, Strange Fruit, I got the reference in Mr. Valdez’s painting to the term which gave the book its title, but his painting seemed too polished and elegant to be “in-your-face.” The same, because of folk-art cuteness, for Ms. German’s sculpture. It’s a judgment call, of course—and it’s not a judgment on the overall quality of the art—but I didn’t see anybody exactly wincing in front of those pieces.

Mssrs Bacigalupi and Alligood mentioned the proportion of first-time museum-goers to me, and how they didn’t want a survey of American contemporary art to turn them off.

By the “cold fetishism” of Mr. Adams’s painting, I meant the obsession with anatomical and drapery outline, sort of à la J.A.D. Ingres (though he wouldn’t have composed in such a baroque way), and with a certain secondary sexual characteristic of the female nude. It might have been put more clearly, but—the oldest excuse in the world—there was a pretty fast deadline.

Thanks for your close reading of the review, and responding to it in print.