Let me wholeheartedly recommend the artsy nudie magazine from New Orleans, Momma Tried, coming out with their second issue soon. They’re kickstarting it — check out the amazing video above and donate! Here’s their high-falutin’ self-description:

“Momma Tried is a print-only non-heteronormative nudie mag. Each issue contains work by emerging artists and writers from around the globe, subversive humor, and unique collaborations collaged together into a limited edition pop art object.”

That’s the general idea, but I just want to add that it’s loads of fun. The vibe is ’70s Playboys — raunchy but richly creative. I really like the spirit of this magazine, which insists on beautifully produced print, acknowledging that it’s a doomed business model. They don’t have a business model. They just want to make something, for a while. Make something you care about keeping.

Issue 1 (which featured former Little Rock DJ Cameron Holifield dressed, and undressed, as a cowboy) was awesome. Like, look how happy this mermaid is reading it: 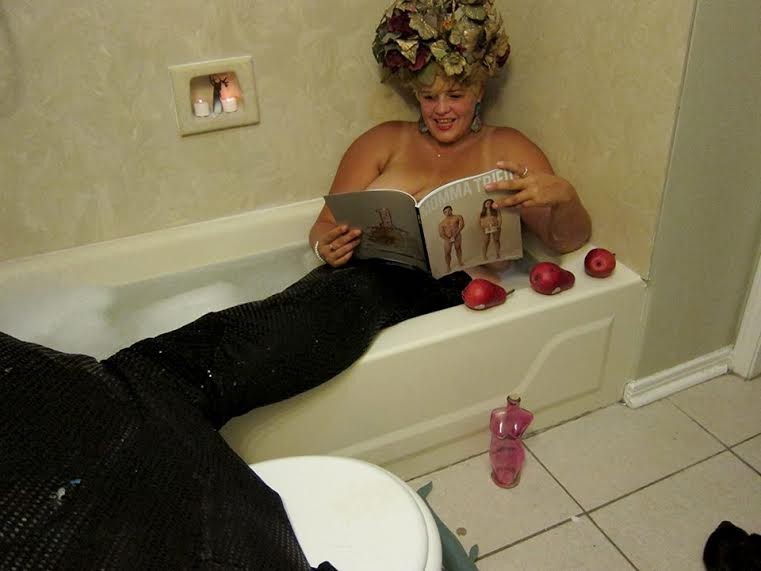 Issue 2 promises to be out of sight. Disclosure: issue 2 features a painting from my wife. Check it out in this writeup on Issue 2 from Southern Glossary.

Mama tried to raise me better, but I still like artsy nudie mags. — David Ramsey

This week, a hearty recommend for Lucinda Williams’ lovely song “Sweet Ol’ World,” which she wrote as a response to the suicide of the Arkansas poet Frank Stanford, who shot himself three times in the heart in Fayetteville in June 1978. Not planning to take Frank’s way out, but hopefully somebody will remember to play this at my funeral someday. — David Koon

I was at an engagement party a few weeks ago for one of my colleagues (whose actual wedding is going to be a family affair, too small for us bums to attend), sitting with a group of girls who had just moved to Little Rock and talking about what girls who don’t know each other well always talk about, as a way to break the ice and evaluate each other: “Your dress is so good,” “I wasn’t sure if I wanted to wear heels or not,” “How long have you had short hair?” The host’s house was a cute bungalow in Hillcrest. The couple who lives there had just remodeled their kitchen to be outfitted with wood-block countertops, the walls were lined with inset bookshelves, guests were shaking up DIY cocktails in the next room.

As we kept up our small talk, I saw a book on the closest shelf that I’ve had my eye on for a few months: “Women in Clothes,” a collaborative book on women’s style edited by Sheila Heti, Heidi Julavits, and Leanne Shapton. The book is basically a crowd-sourced “fuck you” to women’s fashion. The three editors asked women (and men) all over the country to fill out a survey so they could put together a collection that would help themselves and others understand how women think about style (how they get dressed in the morning, how they shop for clothes, do they have dressing rules), as a way to explore the “range of motives that inform how women present themselves through clothes, and what style really means.”

Thousands of women completed the survey, and the result is a collection of 639 women revealing some of the rawest statements about fashion insecurity (and triumph) I’ve ever read. Many of the collaborators took pictures of their wardrobes, and so there is included a tile spread of Sadie Stein’s bras, Molly Murray’s vintage 3-inch heels, as well as Gina Rico’s hairbrushes and combs. There’s even a whole section on “Mothers as Others,” where the editors requested their other collaborators to “send a photograph of your mother from the time before she had children.” It’s a lovely collection, basically, and an inspiring one. It evaporates the illusion that women just “don’t think about clothes,” but have to look nice anyway, which is something even women forget about each other. — Caitlin Love

It’s probably not worth reading in all its sprawling, pedantic revelry, but I love this post from the Awl by Johana King-Slutzky that takes down the word “problematic.” I couldn’t agree more. It’s a crappy word, and it’s everywhere now. At the awful intersection of meaningless and didactic, there sits “problematic.” King-Slutzky says the word “has become shorthand for self-serious identity politics,” especially on the internet.”Problematic” is a roundabout way of communicating “bad” while sounding authoritative, but it insidiously abdicates any responsibility for explaining cause and effect. She writes:

“‘Problematic’ bundles urgency, seriousness, and debatability into a single vague word, which is great for both sound bytes and tweets…”Problematic” will tell you what is problematic — usually race or gender — but it won’t tell you who did what, when; there are no finite verbs.”

“‘Problematic,’ which has always lent itself to representational and mechanical error, blends the right connotations-—difficult representation and real world effects—-to suit identity politics. In many ways, identity politics, which are overtly representational, treat bodies like positivist machines that know more than the self-deluding mind. So one reason ‘problematic’ has flourished in the last fifty years is because it works well with this post-1968 moment (which we’re still in).”

So why is this problematic? Well, for one thing:

“Problematic situations are never crises, which is damning when you consider that “problematic” tends to be used in critical discourse on racism, sexism, and homophobia. ‘Problematic’ whines; it does not act. It takes baths. But most of all, it, like racism, sexism, classism, ableism, and heterosexism, is definitely bad for indefinite reasons.” — Benji Hardy

Music blogs barely exist anymore, at least the free-form, ugly, personal kind that were around a decade ago, but one of my favorites from that era that seems to be doing fine is Awesome Tapes From Africa. Started by a guy named Brian Shimkovitz, who went to Ghana on a Fulbright and became obsessed with West African cassette culture, the blog has long been a depository for `80s and `90s African pop that most outsiders wouldn’t otherwise have known anything about. In recent years, he’s apparently turned the project into a record label, endeavoring to track down the artists (or their surviving families) to work out arrangements for fair rights and royalties. This month, they reissued Aby Ngana Diop’s “Liital,” originally released in 1994. Diop, a Senegalese singer who died in 1997, was apparently Dakar’s most famous taasukat, taasu being “a Wolof-language poetic style, usually performed by women griots over frenetic drum patterns, with an aggressive verbal flow thought to presage rap.” It also sounds a little like drum ‘n’ bass, or like something totally out of time, a pure pop rush of drum machines, offbeat samples, chants and synthesizers. It’s available on LP, CD, MP3 or, of course, cassette. — Will Stephenson