First lady Ginger Beebe and the committee have worked for a year on the notion of placing sculpture by Arkansas artists on the mansion grounds, work that will have an educational component as well as an aesthetic one. Horn’s name was the first to come up because of the quality of her work, for which she is known nationally.

A committee formed to advise the Commission on the artwork that included Crystal Bridges Museum of American Art President Don Bacigalupi, Arkansas Arts Center Director Todd Herman and Kaki Hockersmith toured the grounds in late October to get discuss where the sculpture and future works would best be sited. Horn’s sculpture would be placed at the end of the family garden (VI). Also on the committee are Martha Miller, director of the Arkansas Department of Heritage; Dr. Dean Kumpuris, citizen member, and Sheila Vaught, representing the Mansion Association. All artwork on the grounds will be by Arkansas artists. Mike Mayton, who headed today’s meeting in place of Chairman Wayne Cranford, said he’d love the mansion to someday acquire a piece by Anita Huffington, the Winslow sculptor who is also known nationally for her work in marble and bronze. Like Horn, her work is included in the collections of Crystal Bridges and the Arts Center.

Horn’s millstone — which Hockersmith said could serve as a touchpoint for discussion of Arkansas’s mill history —  has a retail price of $30,000. Whatever the work is bought for, funds will come from the Mansion Association, a 501(c)(3) nonprofit that supports upkeep of the Grand Hall and other Mansion expenses. It is on the grounds of the studio of George Dombek outside Fayetteville, along with other works by Horn.

The Mansion Commission meeting was the final one for the first lady. She and Mansion administrator Ron Maxwell thanked the commission and said they were, as is appropriate, leaving the mansion in better shape than they found it, with fixes to plumbing, new insulation, copper guttering and a refurbishing of the Grand Hall carpet. (The mansion was famously a mess when the Beebes moved in, with dog-stained carpeting and upholstery, mold and such; also artwork removed by the former first lady, Janet Huckabee, had to be reclaimed.) Asa and Susan Hutchinson are to visit the Mansion today to get a close look at their new home. The first lady repeated her position that the mansion is the “people’s house” that requires loving, and bipartisan, care.

The Commission surprised the first lady with a painting by Arden Boyce of the mansion walkway with the Beebes’ first German Shepherd, Mosel, lying happily in the grass. Mosel died after living at the mansion for two years. 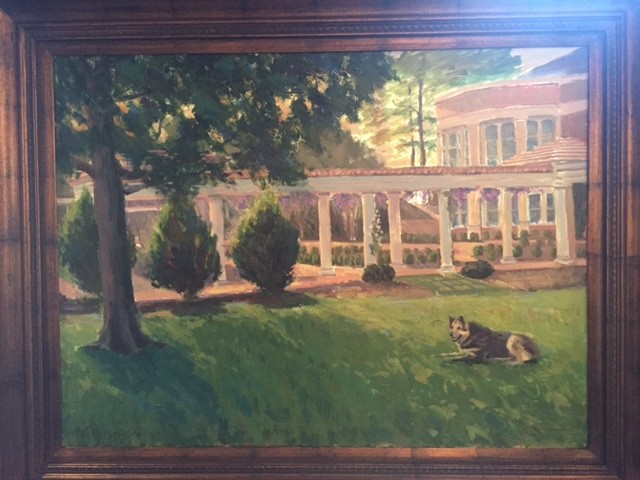