Read this month's issue
Browse the issue archives
Advertisement
Home Rock Candy Long Underwear, the Useless Web, Organized Konfusion, Getting away for a while...

I recommend getting away for a while. Me and the missus are out here eating Walmart produce in the country and it is all right. The German came to visit us this week and showed us a fine new way to cook pasta. The German – we met him on our honeymoon trip to Europe and on his direction had swallowed some mind-benders and spent twelve hours in a nightclub in East Berlin, where we had decided, mid-dancing, to move to Little Rock, Arkansas. So it is the mind-bending circle of life that now the German is with us here, in the woods in Cleburne County, where we have taken residence by a lake and just down the road from a Dollar General with a clerk who is now pregnant with her third set of twins.

The leaves are hot orange with the arrival of fall and each day we watch the big sun appear overhead and fall slowly down over the lake as the earth takes its turn. If we are dumb animals in an accidental universe, we are, at least, attuned.

These are, on net, small troubles.

We have a PO Box across the lake in Higden. Yesterday, we received a package from our friend Martin which included the following records: Clyde McPhatter’s “Treasure of Love,” Tom Waits’ “Swordfishtrombones,” “The Million Dollar Quartet,” Sonny Curtis’ “Love is All Around,” and “Chicago Blues: A Quarter Century.”

These were from a collection of records Martin bought on Craigslist, which purported to be the record collection of 70s country singer Gary Stewart. Stewart was a hero, maybe not to many people, but to us, and to Martin. The seller was offering them piecemeal, a notion that upset Martin’s sense of right, so he purchased the collection in full. Do we have verification that this collection really belonged to the late Stewart? No, we do not. But Martin’s feeling, which we share, is that it’s too peculiar to make it up, so it must be true.

So Martin sent us five on loan to bring us comfort by the lake. As the sun sets, we are drinking wine secured from a county less in the grips of the Church of Christ and listening to Sonny Curtis singing: “The cowboy singer, a drugstore western swinger/Had more women than most of us cowboys lose/He never was blue but he could sing the blues.”

Somewhere very far and very close the global internet village keeps on buzzing without us. The imaginary universes on the hot new television serials do not need us and the stories march on. We will miss a thing or two. But then, if we weren’t here, we would miss the particular ripple in the lake’s current today, the particular blood-orange shade of particular leaves at this particular moment in fall. We are bearing witness to the quiet things. — David Ramsey 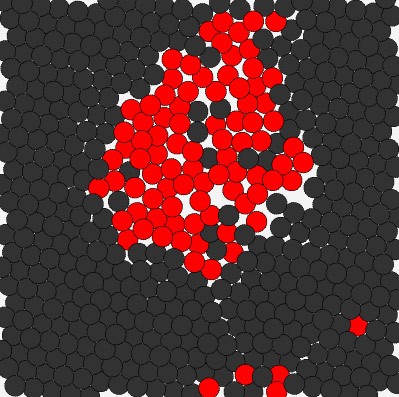 I’m a procrastinator. Right now, in fact, I’ve got three different things I should be working on. Instead, I’m doing this. The Internet, that great Sargasso Sea of wholly useless bullshit, has been an absolute boon for procrastinators like me. Lucky for you and me both, somebody has thought to put the most useless stuff on the Internet all in one place. I stumbled up on The Useless Web several years back. One big button randomly take you to a totally safe for work website so pointless that it’ll make you wonder why anybody wasted a few minutes of their precious, precious life to make such a thing. Click it ten times, get ten useless websites.

A lot of the pages the site will lead you to require some kind of interaction on your part, either doing a random click on the screen, or dragging your cursor across. Some are just stupid, like Eel Slap!, which allows you to — yes — repeatedly slap a dude with an eel. Others are strangely beautiful, like the Tonematrix, which lets you make music by clicking random squares. All of them, however, speak to our seemingly bottomless capacity to waste time and energy on frivolous pursuits. Not that there’s anything wrong with that. There’s a lot of time-killing nothing out there, kids. Better get to it. — David Koon

I recommend long underwear. For many of you, I’m sure that’s about as helpful as suggesting you not wear sweaters in July, but I would submit that long underwear is not intuitive to some of us who grew up in the South. Raised in Arkansas by a parent who was herself raised on the Gulf Coast, I grew up with a fundamental lack of winter best practices. Thermal undergarments, wool socks, even proper use of scarves – these were all discoveries that only I made in my twenties.

Maybe it’s not a Southern thing. Probably, now that I think about it, it’s just a weirdo thing, a raised-by-a-family-on-the-Moon thing. I remember a long period of my childhood when my mom insisted on wearing nothing but muumuus. I refused to put closed-toe shoes on my feet until something like my 10th birthday. I also remember thinking it was fairly normal to wear socks as mittens. All I know is that the very idea of having a secondary layer of leg insulation was totally foreign to me until someone – a girlfriend, I think – gave me a pair in college. Because I found them constricting and felt like they made me look like a Dr. Seuss character, I balked at first, but then I grasped the fact that wearing long underwear makes you less cold. Every year since, as my cardiovascular activity decreases and my emotional fragility increases, I’ve spent less and less time outside of long johns during the winter months. They’re a haven in a heartless world. In fact – I’m wearing them right now. — Benji Hardy

I recommend Organized Konfusion’s second album, “Stress: The Extinction Agenda.” It came out in 1994, before Pharoahe Monch became better known for his solo stuff, but I first heard it in 2011, when I spent a summer living in San Francisco. For a while I stayed on my cousin’s floor in the Inner Richmond, a nice enough place that always smelled like fish oil. It was a long a bus ride to work from there, though, so I eventually moved to an apartment in the Western Addition, where one condition of the sublease was that I look after the tenant’s cat, whose name was Blue, I think. — Will Stephenson