And here’s mine: It takes a bit to figure out how to navigate “State of the Art” — do you start down the hall in the temporary gallery space or rush to the Twentieth Century Gallery and start there? — and get pver the fact that there is an overwhelming amount of work to look at. I dashed to hear James Lavadour last Saturday talk about his abstract hints of landscape in, coincidentally or not, precisely the same palette as Thomas Moran, but the crowd was too big and I was surrounded by all kinds of art, including an entrancing video about a headless lamb. But I was nerve-wracked. So I decided to take a deep breath, start at the temporary space and slow down. Finally, when I got to the last room, Daniel Nord‘s “state of the art,” a dark room where a blue light was cast on the walls by a jumble of TV backs and other electronics on the floor, serenity hit. I stopped to figure out what I was listening too — weird repeating musical phrases — and, my eyes now adjusted to the dark, I realized the jumble of electronics was in the form of Mickey Mouse, lying on his side. I cannot tell you why my heart rate slowed and I got happy (I know it had the opposite effect on at least one other viewer), but I did. Now I could look at the art.

Delita Martin’s three works, larger-than-life mixed media prints of women, are stunning. These stitched and stenciled and colorful portraits of African American women — enormous works on paper — will stop you dead in your tracks. There’s no hidden meaning here, nor is it purposefully without meaning. It is simply a beautifully wrought work of a strong African woman. 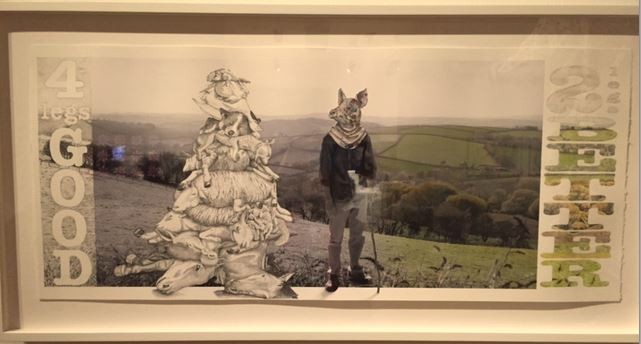 Around the corner, Ligia Bouton’s “Understudy for Animal Farm” series, an installation of drawings and pig heads made of merry bonnet fabric, takes a dark subject matter, meat-eating humans, and instills it with sarcasm — biting, you might say. Among the mixed media works: “4 Legs Good, 2 Legs Better,” a bucolic scene featuring a heap of dead animals (edible and not) with a pig-headed, two-legged gentleman nearby.

Continuing in the gallery, I found the beautifully made, and strange “Codex Vidiot Vidi and Codex Heterogenous,” Michael Menchaca’s crisp visual discourse on embattled encounters between Mesoamerican warriors and animals with glyph heads, a reference to border strife. I liked them because I recognized the codex form right away (and these days, when you are in on half what’s going on you fell pretty good), because I am love his crisp printmaking and I could have watched the video forever. But … so there is just so much to see, and the time was finite. This is not, by the way, an artwork-by-artwork review, since I am skipping many worthy pieces — lots of terrific drawing in this show — and many less worthy pieces (Dan Steinhilber’s mylar room comes to mind). 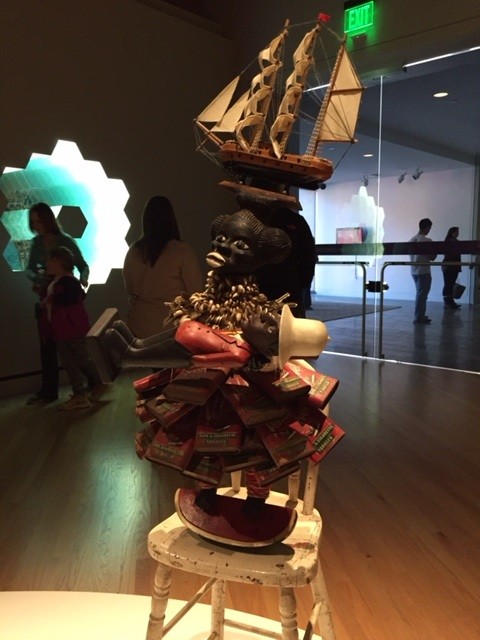 On to Vanessa L. German’s dolls, the Pittsburgh assemblage artist’s expression of her DNA, she says in a video made by the museum. She calls them “power figures,” constructions with the power to protect and encourage self-esteem. They are wonderful constructions, dolls painted black and given cowrie shells for lips. In “Souvenir of Our Trip” the doll is wearing a skirt fashioned of tobacco cans, carrying a man in her arms and balancing a ship on her head. Randy Newman’s “Sail Away” played in my head.

One of the most masterful, and most old master like, works in the exhibit is Dan Witz’s “Vision of Disorder,” testosterone-soaked men in a mosh pit, tattoed and Nirvana-T-shirted, against a black background. It’s a triptych, for some reason. I’m sure Witz had a reason, but I find triptyches — save religious ones that tell complete stories — that break up a single picture plane annoying. Maybe he was breaking the picture into parts to mime the disorder of the scene. I’d rather he hadn’t. 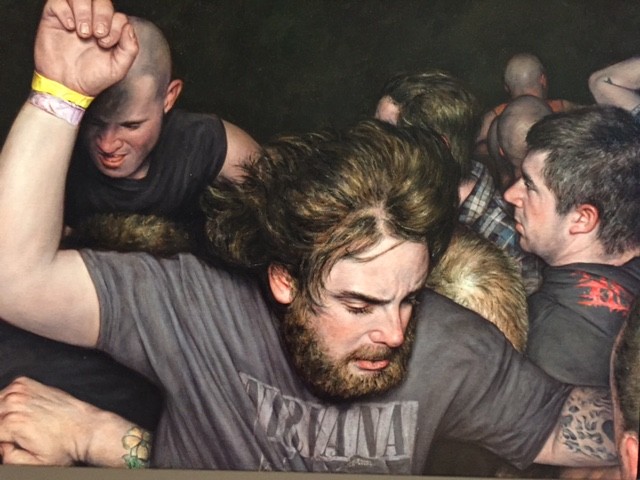 The works I talk about here don’t reflect the obsessive nature of most of the work in the show: zillions of lottery tickets in a pattern (“Forever, Almost” by Ghost of a Dream), cut up dollars to make an image of the Empire State Building (“Overgrown Empire,” Mark Wagner), the “Oh Fortuna” wheel (Nathalie Miebach), the stunning mandala “Subhan’Allah: The Lord’s Prayer” in which the artist, Meg Hitchcock, forming the prayer a letter at a time on tiny pieces of paper, and many more. If this show, and the last two drawing invitationals at the Arts Center, reflect the state of the art 2014, it is one of intense devotion to detail.

There are more than 100 pieces of art in the show. One visit won’t do. Read more about other works in the show at the links to the Cushman and Larsen reviews up above and other Eye Candy posts here and here.