Max Brantley posted on the Arkansas Blog news from BLOUIN ARTINFO while I was out about the auction of an Isamu Noguchi table that sources say Alice Walton was the high bidder on — paying $4,450,500.

“The Goodyear Table, for A. Conger Goodyear,” which has a stack-laminated rosewood base and the original Herculite plate glass top, was manufactured in 1939. Art collector Ronald Lauder (of Estee Lauder bucks) is said to have consigned the piece to the Phillips auction house.

The table is a little too early to be appropriate for the Usonian home designed by Frank Lloyd Wright that is moving to Crystal Bridges Museum of American Art in Bentonville (the Bachman Wilson House, built in 1954). So maybe it’s for Walton’s home, if the sources are correct that she won the bidding. Besides, the house apparently comes with furniture.

However, if Walton was looking for tables to fit the Wright home era, maybe she also bought the “Managing Committee Table,” designed by Balkrishna Doshi and Le Corbusier, 1953-54. The auction house estimated it would sell for $300,000 to $400,000, but the winning bid was $1.8 million. 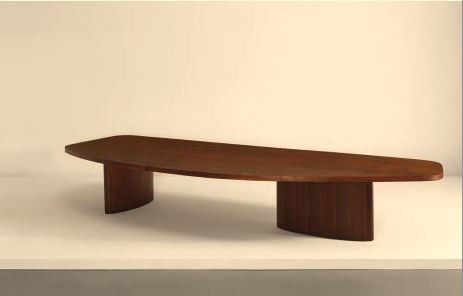