Perfect for the season: The Netflix series “Lilyhammer,” starring Steve Van Zandt as a protected witness mobster living in Norway. Lots of snow. Van Zandt brings his felonious ways to prim and proper Norway in slapstick fashion as a nightclub operator with Norwegian good fellows. Great scenery. A good dose of information on Scandinavian socialism and folkways. And good music. Gary US Bonds turned up on one episode. — Max Brantley


Every few weeks, the designer Eleanor Lutz posts a new original infographic to her site, Tabletop Whale. Because it is the holidays, I’m assuming this week’s animated gif (above) aims to answer the question, what did Jesus look like the nine months leading up to that fateful night in Bethlehem? Or perhaps not. In any case, I recommend this fascinating look at the process a human goes through whilst in the womb.

Also, don’t know what to buy for the graphic designer/black metal fan in your life for Christmas? How about the font from Deafheaven’s amazing album “Sunbather”! — Bryan Moats

I recommend that you read “The Christmas Miracle” by Rebecca Curtis, but only if you are able to handle a story about pedophilia, Lyme disease and the violent, bloody deaths of a series of cats, all set against a backdrop of gingerbread houses and family holiday communion. And, only if you are open to the idea that such a story can be as touching as it is grotesque, and as funny as it is disturbing:

I am telling this story to you, K, even though you are a Russian Communist and a Jewish person who doesn’t believe Jesus was the son of God, and even though Christmas is an obnoxious holiday when millions of people decapitate pine trees and watch them slowly die in their living rooms, because miracles can happen on any day, and as long as man has existed he’s celebrated this weirdest time of year, the shortest stretch of sunlight, the winter solstice, as a time of fear, change, courage, and passion. I’m going to tell you the story of a miracle that happened at Christmas.


When I lived in Athens, Ga., one band I always liked was The Dream Scene, a recording project helmed by a guy named Javier Morales. Their most memorable release was a 2009 Christmas album — haunting and strangely faithful bedroom-pop versions of Christmas mall-classics, unironically and pretty painstakingly produced. The album had a big following in the city and was played near-constantly at people’s houses around the holidays. It’s both a little insipid — why spend so much effort and imagination on another arrangement of “Do You Hear What I Hear?” etc. — and also pretty impressive, particularly from a craft perspective.

Thanks to Facebook, I saw this week that The Dream Scene has returned with yet another Christmas album: “Christmas II.” On first listen, it sounds even more elaborately produced — drawing on off-kilter pop stylists like Todd Rundgren, “Smiley Smile”-era Brian Wilson and R. Stevie Moore, plus what might be understood as kind of reclaimed New Age quality (VHS synth washes and weight-loss-meditation tapes and ’80s Nintendo soundtracks). It’s fully invested in the inherent sadness of the end of the year, and it’s also, aside from the first one and maybe “Christmas on Death Row,” the only good Christmas album. — Will Stephenson

Got most of your holiday shopping done, but still have some extra cash left over to spend on friends, family and loved ones? This year, instead of blowing that extra money on some plastic piece of junk you know will end up collecting dust on a bookshelf, or any other meaningless gift you find at the eleventh hour, consider making a donation in their name to a local 9 year old girl’s GoFundMe campaign that is raising money to buy cold weather essentials (socks, hand warmers, foot warmers, etc.) for our homeless population in Little Rock. All items purchased with your money will go directly to The Van, Inc./The One, Inc. for distribution (If you don’t know about either of these organizations yet, you should. Look them up!). Come on, Little Rock. If a NINE YEAR OLD can see through the holiday consumerist bullshit that saturates all things end-of-year, maybe you should, too. Show this incredible Arkansas youth her efforts have not gone unnoticed. Back this lil’ hero up, and help her make a difference! — Erin Holland

Every year over the holiday, at some indeterminate juncture, my family gathers around the fireplace, we turn off the lights, and my dad puts this story called “The Train” on the stereo. It’s hokey, in the best kind of Christmasy, wintry way. I don’t know much about its origins, and I don’t care to. We used to sip hot chocolate and tea as we listened; nowadays we drink cold glasses of Highland Brewing’s Cold Mountain Winter Ale, fresh from the mountains of North Carolina. Tomorrow, I push off for the long drive home. See you next year, Arkansas. — Maxwell George

The entire run of “Pee-wee’s Playhouse” is now on Netflix. My wife and I watched it for two hours last night — it’s hypnotic. — David Koon

One of my sons is finally old enough for me to buy toys that I’m excited to play with. I gleefully did all of the shopping for him and his elementary school-aged cousins this year. Here’s the best of what I came up with: A robotic dinosaur that follows simple hand commands and gets really mad when you pull its tail. Magnetic building blocks. A Nerf gatling gun “drone.” Kinetic sand. And lots of awesome Marvel action figures. — Lindsey Millar

I recommend going to see trumpeter swans at Magness Lake, just outside of Heber Springs in Sugar Loaf. It’s a pretty little lake, just off the Little Red River, and for some reason, a group of trumpeter swans make it their winter home. This is peculiar because they don’t typically come this far south — they’re normally up in Canada, Alaska, or the northern U.S., and this is by far the furthest they’re known to come. Three trumpeter swans were first spotted on Lake Magness in 1991, probably thrown off course by a storm, and apparently they liked the spot and told their buddies. Now around 150 swans migrate to Arkansas every year and make it their winter vacation spot. They arrive in late November and leave in March. 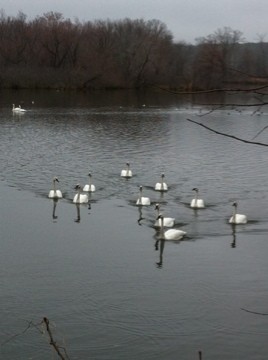 They’re stunning — solid white with 8-foot wingspans. And they honk like…trumpets! They’re around all day, but going in the late afternoon is best (earlier in the day, some have flown off to look for food, but by 3 or 4 p.m., pretty much all of them will be on the lake, and toward the end of the day is when you are most likely to see them in flight). Is it amazing to see trumpeter swans circle overhead and then skid across the water for a landing? Yes, it is amazing. Is it amazing to see trumpeter swans dive their heads in the water to eat some dried corn you’ve tossed in the water, shaking their tail feathers all the while? Also, yes.

Apparently, one year, someone stole one and cooked it for Christmas dinner. Don’t do that, dummy. It’s illegal to touch them, but you can feed them dried corn, available at various local shops, and they will swim right up close to you. Trumpeter swans are the real reason for the season. Your holidays will be happier if you go see them. — David Ramsey