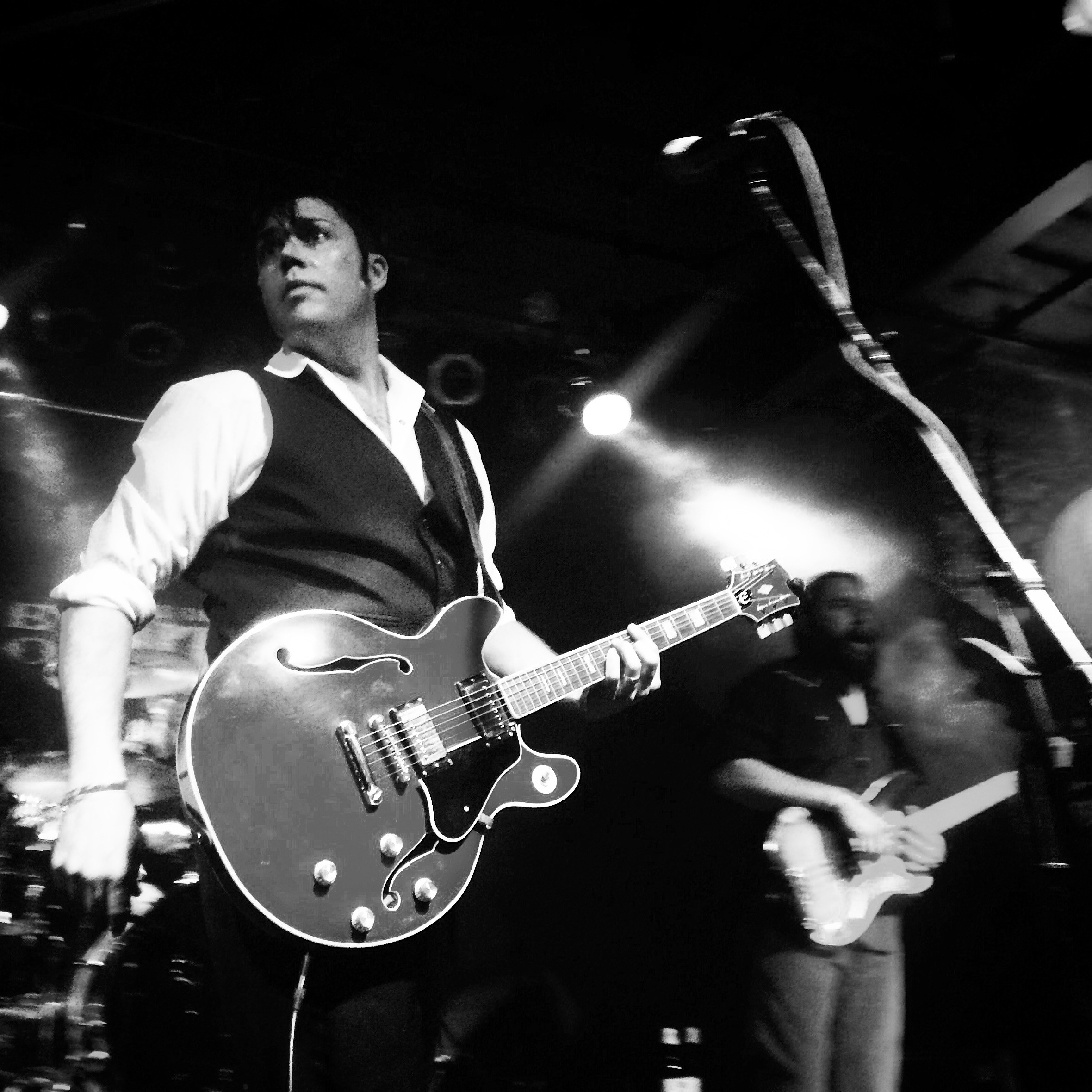 I arrived at The Rev Room Friday at 7:15 p.m., as a bartender was setting up for a busy night. I saw Mark Colbert (soundman) and Mark Sadler (lighting) and we talked shop a while. I saw Samantha “Sam” Allen (venue manager) and we caught up as well. Soon I met and interviewed Richie Barnard, the website coordinator for the Little Rock Scene, whose 10 Year Anniversary we were here to celebrate. In 2004, Barnard and Brett McDonald enjoyed Little Rock music so much they created the website to post local live music happenings. “I wanted to do something for the local scene,” Richie told me. Now Brett is basically the website domain owner and Richie is the driving force behind it all. He said he updates the site a few hours every Sunday morning from his current home near Sacramento, Calif.

Richie hasn’t been back to Little Rock in the past two years, but he seemed excited to go to as many local shows as possible while in town for the holidays visiting family. He said, “I’m really looking forward to the White Water Tavern show this coming Tuesday, The Moving Front.” When asked what he likes most about the Arkansas music scene, he replied, “Music for me is a sort of escape and there’s something about live music that helps me really escape, yet feel part of the moment at the same time. I am also constantly amazed there are such good quality bands here with great recordings.” Feel free to contact Richie through the website. He seemed to be inspired simply by watching the growth of the site and of interest in Arkansas music.

The bands performing at the party were Weedhorse, Flat Top Tony and the Purple Canoes and John Neal Rock and Roll. I talked with a few members before the show. 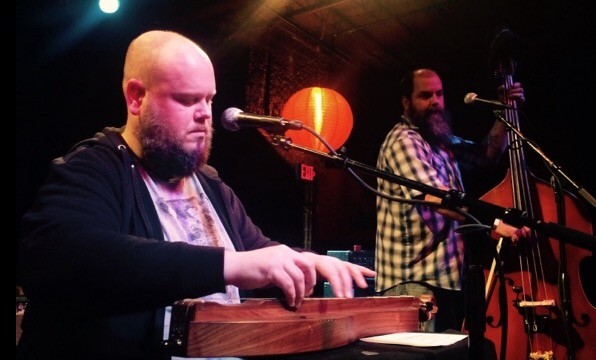 Weedhorse is Aaron Sarlo on acoustic guitar, lap dulcimer and vocals with Adrian Bozeman on standup bass, acoustic guitar and vocals. Aaron is the president of the UK based Mostar Records and co-hosts Shoog Radio with Kara Bibb on KABF 88.3-FM every Tuesday from noon-3 p.m. He also plays or has played in the bands Techno-Squid Eats Parliament, Dangerous Idiots, Laundry for the Apocalypse and Duckstronaut. Adrian plays guitar in Peckerwolf and was in a band called Chow Quay. I was interested in seeing Weedhorse because it was their debut live performance and I know Aaron is a talented artist, having played drums with him in Techno-Squid Eats Parliament and in the first line-up of The Dangerous Idiots.

Adrian and I started the conversation off with how many other names we knew of for the upright bass. I said “double bass, bass fiddle,” and he jumped in, “Contrabass, upright bass, standup bass, bass fiddle, dog-house bass.” We both starting laughing and then he said (with an overly serious tone), “Bull fiddle, yeah. I think bull fiddle is my favorite name for it.” Adrian spoke of the talent and diversity in Arkansas musicians and especially right here in Little Rock. “There are so many good musicians doing so many things here,” he said. I learned that it was folk and bluegrass that got Adrian interested in playing music. He said, “My parents used to take us up to Mountain View. I was really into ‘Folkers’ and Bluegrass. I sort of got tired of listening to it and became more interested in learning how to play it.”

When asked to describe the sound of Weedhorse he replied, “I haven’t had the time to totally see what we’re going to sound like yet.” Aaron said he thinks Weedhorse sounds “Americana meets spaghetti western … maybe like the music of India meets Conway Twitty.” Weedhorse is currently recording a debut record at Wolfman Studios with Jason Tedford. On the subject of the Little Rock scene Aaron added, “We’re more than a scene. We are a family.”

Flat Top Tony and the Purple Canoes is Chad Conder on guitar and vocals, Jonathan Dodson on guitar and backing vocals, Darian Stribling on bass and backing vocals and Brandon Alanis on drums and backing vocals. Chad is also the drummer for Brother Andy and His Big Damn Mouth, Adam Faucett, Booyah! Dad and he plays guitar and sings in Cosby and Global Test. His band Cosby has a record being mixed and it will be out soon. Jonathan plays bass for Brother Andy and His Big Damn Mouth and Adam Faucett and also stars in the Dangerous Idiots music video, “Role Model.” Darian is the owner of Blue Chair Studios, guitarist for 2 Minutes Hate and also plays bass live for Bobgoblin. Brandon Alanis played drums in Global Test but also plays guitar and sings.

Before the show, Chad explained to me most of the Cabot guys in Flat Top Tony and the Purple Canoes were also in another band of his called Global Test. Brandon got a cool drum tech position for a major label national touring act that he couldn’t turn down. Chad told me, “We missed playing music with Brandon on drums. About seven years ago, when Brandon came into town, we made this band … almost like a joke side project. We started this new band, wrote all new songs in one night and immediately played and recorded at a house show venue in Russellville called The Fort. Maybe that’s why our songs aren’t that great.” He paused to laugh and continued, “Tonight is our reunion show after not playing for seven years.”

I asked Chad if he had any music available for people to listen online and he said “You know, there might still be a MySpace site from like 2007, with our live album on it called ‘Take Off Your Panties, Ladies.’” During sound-check he proudly showed me his new J. Mascis series Fender Jazzmaster guitar which sported a glossy red-purple glitter paint job. He gave this advice for up and coming musicians: “Do it yourself. Play house shows. Record your own records. When you’re old enough to switch to the bar scene try not to kill yourselves with alcohol. Oh, and go on tour!” 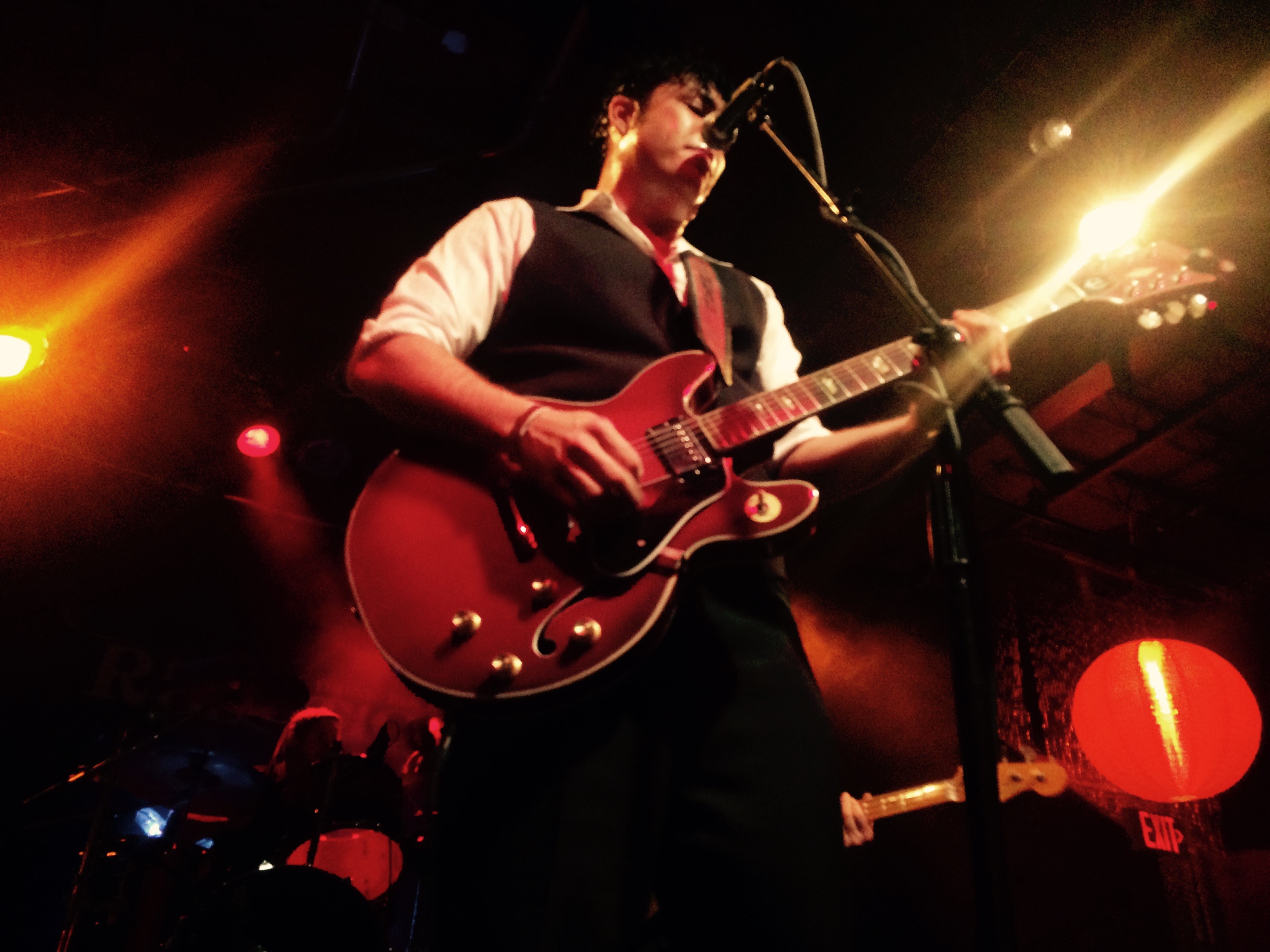 John Neal Rock and Roll is John Neal on lead vocals, electric and acoustic guitar. Tonight his backing band features Logan Crowell, Bob Applby, Graeme Higgins and Justin “Chili Dawg” Bryant. While interviewing John I learned he used to be in a band called Poboy Society. Describing his music, John said, “I think it’s more fun when there are no rules and I called the band John Neal ‘Rock and Roll’ because lots of stuff fits into the category of rock and roll. It allows me to do what I want. I’ve recently been into gospel music and I’m always sort of going for something that is uplifting. Something of a higher power, something you can’t see but can feel.”

We then discussed and sort of celebrated the fact that we both own and listen to the 1967 Elvis gospel album “How Great Thou Art.” Discussing the Little Rock music scene, John said, “There are a lot of really good recordings available out there by bands in this town. I like live shows but the making of records is really where it’s at for me … the art of recording is fun and interesting. Music is a way for me to express myself. It just makes life go better, you know? I mean, have you ever watched a movie without music in it? No! Music is important and it is everywhere.”

I last saw John Neal Rock and Roll in March, at the 2014 Arkansas Times Musicians Showcase Finals. I thought they had a good shot at winning. John also added that he often pitches his songs to a publisher in Los Angeles, and has had his songs on the shows “Californication” and “Friday Night Lights,” as well as a car commercial. Asked what inspires him, he said, “I’ve always liked country music because country music always seems to be about ‘the song’. I write rock ‘n roll and I guess, honestly, I started playing music to get the attention of the ladies. I’m a fan of Little Richard and I’m also inspired by the famous baseball player from Arkansas named Brooks Robinson. Nowadays you could say that my wife is my muse.” Then he gave me a smile.

The crowd started trickling in around 8:30 and the music started up just after 9, when Weedhorse took the stage. Weedhorse immediately drew people closer and most stopped what they were doing and paid attention. Some songs had Aaron on lap dulcimer and Adrian on the upright bass. Some had Adrian on guitar and Aaron on the dulcimer. They also had a few songs with Aaron on acoustic guitar and Adrian on the upright bass. They both traded off singing but, for the most part, Aaron sang lead and Adrian did backup. There were hints of Neutral Milk Hotel and a few atmospheric interludes, like maybe Radiohead meets John Denver. They covered a Dangerous Idiots song, “Role Model,” and it sounded amazing with Adrian using a bow on his upright bass. Adrian said between one song, “Uh, can I get some more weed in my monitor?” 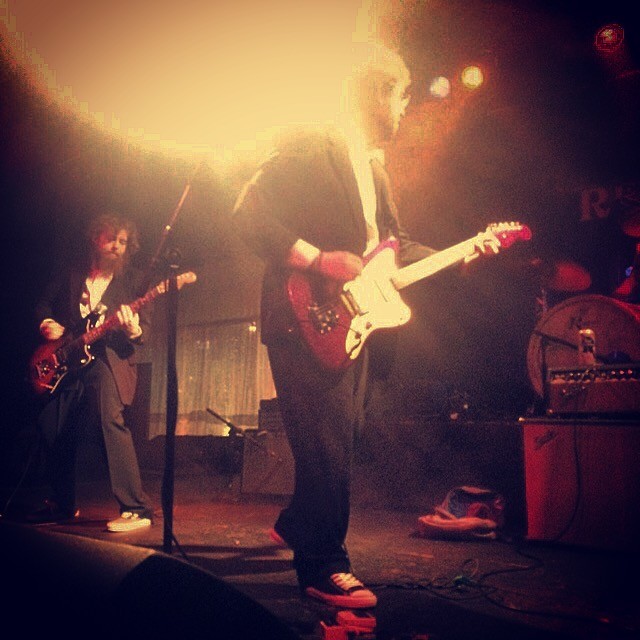 Flat Top Tony and the Purple Canoes took the stage at 10 with full amplified force. More than 20 people got up and started moving onto the dance floor area in front of the stage. They had a higher energy level and stage presence than most bands I’ve seen and their performance was as good as most national acts. Not too bad for a “joke side project.” It was melt-your-face, feel-the-bass, lose-your-place music. It had pristine, yet sloppy hooks. It was fun, relentlessly emotional alternative rock with a kind of trainwreck beauty. It was the kind of music that makes one intrigued and afraid at the same time.

By 11 there must have been over 200 people at The Rev Room and probably 75-100 more if you included the back bar, deck and restaurant. By 11:15, John Neal Rock and Roll was just starting. About 50 people immediately rushed to the front of the stage. John Neal is a handsome and charming man. He looked like a star standing there with his black hair and holding his red Epiphone hollow-body guitar. His band pulled off a rocking, whiskey-soaked swamp-gulch sound that was even more powerful and meatier than what I saw at their showcase finals just a few months earlier. Neal is good front man and interacts well with the audience with confidence. He ended the evening thanking just about everyone he knew from on stage and said, “Get me a bottle of champagne! This is a celebration!”