Read this month's issue
Browse the issue archives
Advertisement
Home Rock Candy Psych of the South: Dead on Arrival’s ‘Run Hide Get Away’ (1969)

Dead on Arrival’s story starts in the San Francisco psychedelic scene and ends in Ashdown, Arkansas. Mike Hubrel was a pre-teen in the golden era of the West Coast sound and was born in South San Francisco. By age 11, he was soaking up the city’s burgeoning music culture, frequenting the stores in the Haight-Ashbury district, and formed his own group, The Daytonas. They played a battle of the bands and won the chance to perform at the Cow Palace, an indoor arena on the Daly City border. He felt he was becoming a part of the legendary music scene that he adored. However, his father feared for his son amid the city’s emergent drug culture, and in a bold decision to ‘save’ him from this path before it was too late, he moved the family back to his hometown of Ashdown in Southwest Arkansas in 1968, when Hubrel was 13 years old.

Hubrel experienced a certain amount of culture shock when he reached the Natural State, but was undeterred and, anyway, forced to adapt to the new region. He put together a band called Dead on Arrival, a reference to his own status as a new transplant. He loved The Byrds, The Grateful Dead and Jefferson Airplane and brought those influences with him. 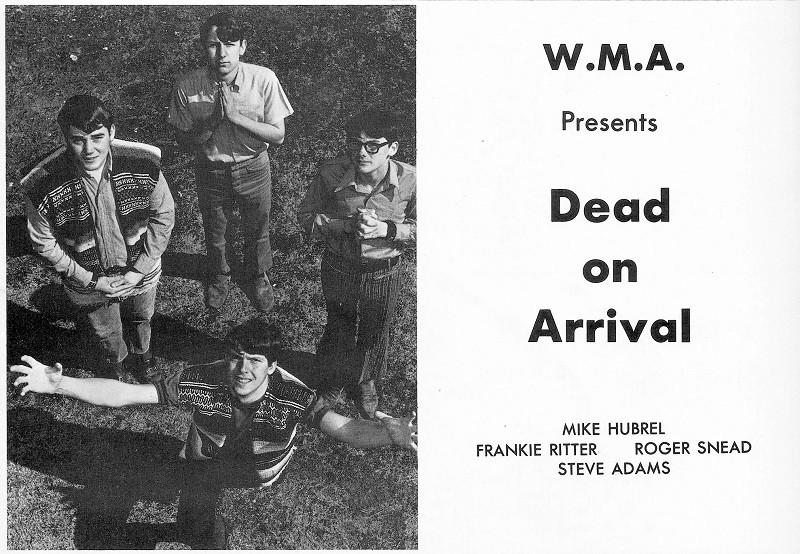 Steve “Wild Man” Adams was a transplant to Ashdown, too, originally hailing from Alabama. He dropped out of high school at 16 and joined the Merchant Marines during Vietnam. Adams didn’t see eye to eye with his parents, so after his service, he moved in with his grandparents in Ashdown to finish school. He was the oldest of the group at 19, but still a junior in high school school, and he played bass with a “Flip Top Monster” Toby amp that had a slanted face and looked like something straight out of “Star Trek” with its giant knobs and large VU meter.

Hubrel’s neighbor was a young kid named Roger Snead who played drums. Paco Ritter, a senior at Ashdown High, joined on guitar. Hubrel introduced them to the sounds of the West Coast, much of which hadn’t yet filtered into the small town. The group worked up some originals by Hubrel along with a set of rock and soul covers. The long-haired look popular elsewhere at the time was nixed by their school principal, who simply forbade it, so they had to rely on dressing the part instead.

They played Friday night dances at the Legion Hut after football games and became a favorite among teens in the immediate area, from Foreman, Ark. to New Boston and Hooks, Texas. Although nearby Texarkana had a thriving teen scene, the group never performed there. Ritter had a Volkswagen that the band painted yellow and put paisley and flower stickers all over it. He would remove the back and passenger seat to fit most of the band’s equipment inside. 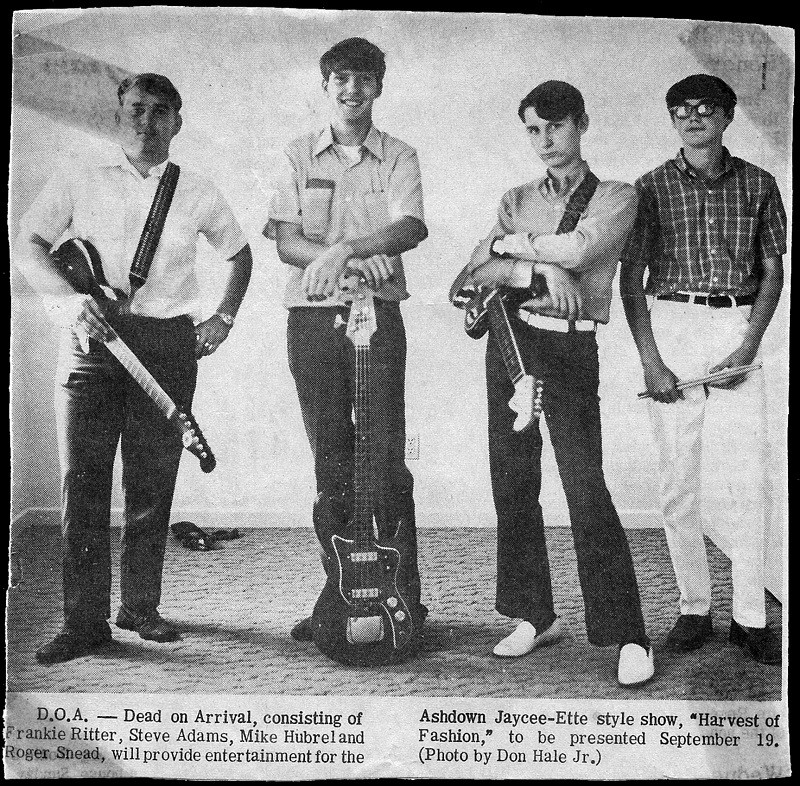 The Uniques, which included future country star Joe Stampley, were a popular group in the area, hailing from Springhill, Louisiana, and signed to Paula Records in Shreveport. They attended Southern State College in Magnolia. Stampley was eating at Herb’s, a local burger joint and hangout in Ashdown, when Hubrel asked him where they could do some recording. Stampley suggested a studio in Shreveport (most likely Sound City) and Adams’ grandparents paid for the session in the Fall of 1969.

They recorded “Run Hide Get Away,” a Hubrel original about his relocation and struggle to find anyone who could understand what he was going through. “Mr. Crying” mined similar territory. The band didn’t have their own PA and usually just plugged the microphones straight into guitar amps, so the professional studio was eye-opening. They left Shreveport with a reel to reel demo in the possession of Adams. It was never seen or heard again.

Shortly after the recording, Snead’s parents got tired of carting him around to various events, so he dropped out of the group. Lynn Freeman, who worked with Ritter at Piggly Wiggly, took over on drums. To commemorate the new member, a local artist named Curtis Hawtorne painted a custom bass drum head that read “WMA presents Dead on Arrival,” an inside joke for the band about Wild Man Adams.

Adams wanted to make their own record, so they went to an electronics shop in Texarkana run by Jim Evans, who had a 4 track reel to reel recorder. The same songs were recorded a second time there and Evans sent the tape to Rimrock pressing plant in Concord, Ark. to make 500 copies on his EMC (Evans Music Company) label. The result is an amazing psychedelic obscurity for the ages, with teen angst underscoring a swirling jangly brooder that floats in the ozone, punctuated by some Ravi Shankar-inspired lead guitar, a scream from the wilderness. 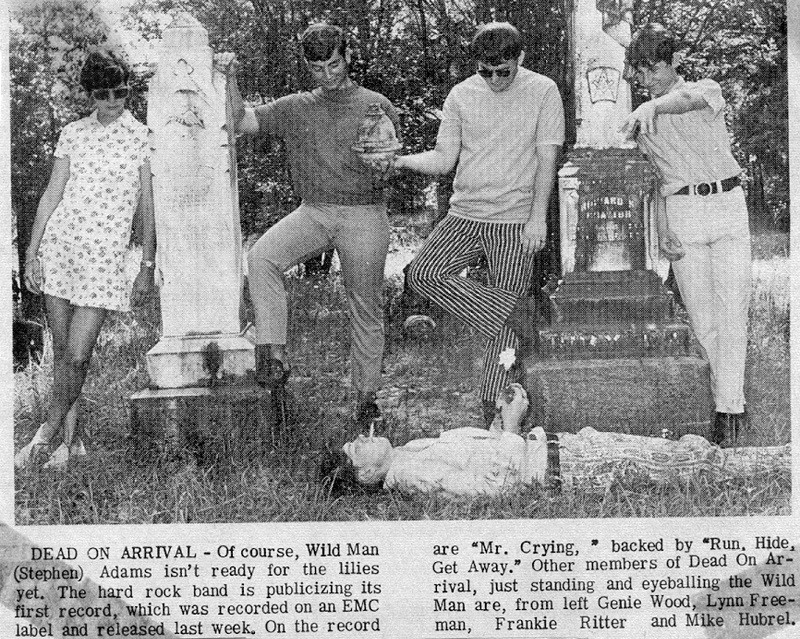 The record got some local play on KMLA in Ashdown and sold to fans in town, but Hubrel was disappointed. It served as a reminder of how much he had lost in the move. He tossed them against the wall in despair, ensuring their rare status today, 45 years later.

Dead on Arrival continued and added Genie Wood, a popular girl at school, to the lineup after she sat in with the band singing Jefferson Airplane tunes at a dance. The group finally broke up in the Summer of 1970, when Paco and Freeman moved on after high school. Hubrel continued to play with other locals until he graduated in 1973 and eventually returned to San Francisco, where he played on an album by the band Augustwolf, and continues to play today.

Ritter was never in a rock band again; he went country in the mid-70s. During the recent Main Street revival movement, he performed every week at the town’s historic movie theater in the Ashdown Jamboree, playing fiddle and bass. Adams has not been seen in decades. The rest of the band figures he’s probably somewhere along the Mexican border with a long beard and a white robe, living the life of a guru or cult leader. The mystery of “Wild Man” persists.