Read this month's issue
Browse the issue archives
Advertisement
Home Rock Candy Psych of the South: TJ and the Fourmations’ ‘Time to Myself’

The Fourmations were a young garage band from Osceola, Ark., that formed in 1965. The star of the group was Tommy Jones, a natural on the drums at the age of 11. Chessie Jones, the owner of an auto repair shop in Osceola, was the stage dad behind the group as well as their manager.

Tommy’s older brother Doug, 13, played bass, along with Ricky Handley, 13, and Bruce Senter, 15, both on guitar. They won a battle of the bands at the Northeast Arkansas District Fair in October of 1965. In February, they played a go-go senior party at the high school, complete with caged dancers. Chessie got permission for the boys to play in area nightclubs too, as long as they didn’t leave the stage.

Tommy broke his arm just as the band started gaining momentum and Handley filled in on drums for some dates that Chessie had booked. Tensions in the young band grew as Handley clashed with Chessie’s management and quit the group. Bo Overby, 17, a relative of Senter, was brought in on guitar and Tommy returned on drums.

In June of 1966, they played a battle of the bands in Memphis and were approached by Curtis Dewey, of the wealthy Dewey Lumber Company family in Marked Tree. Dewey was a talent scout who helped the careers of Jayne Mansfield, Stella Stevens, and Johnny Rivers. He had connections in Hollywood and thought the Fourmations were the next big thing. Dewey said that Tommy Jones was one of the best drummers under 21 in the country, drawing comparisons to Gene Krupa.

After Dewey’s offer, they asked Handley to rejoin the group on guitar. Overby switched to bass and Doug moved to keyboards and sometimes subbed on drums when Tommy took the lead vocal. With five members now, the group changed their name to T.J. and the Fourmations, with Tommy Jones as the main attraction. 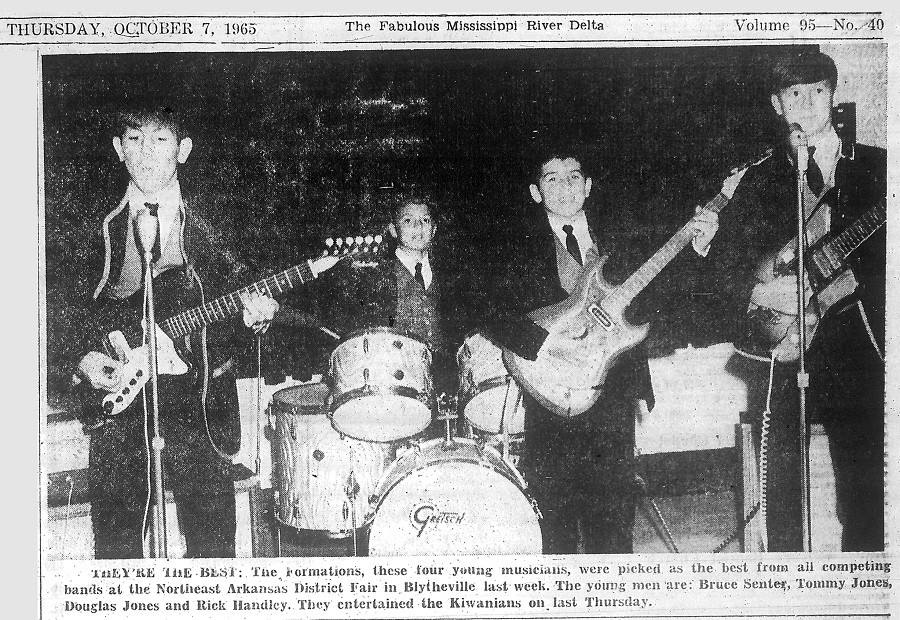 Their fans rallied around the group at a performance in the showroom of Buchanan Chevrolet in Osceola, celebrating their success. Two weeks later, Dewey flew them, along with Chessie, to California.

He set up an audition with Al Bennett, formerly of Joiner, Arkansas, and head of Liberty Records, who agreed to produce a single: “Time to Myself” and “So Glad.” The songs were provided at the studio and after a few takes, professional musicians were brought in to cut the actual track, keeping only Handley and Senter’s vocals and a guitar solo. Two more songs were recorded for a later release.

The group also met Frank Sennes, founder of Hollywood’s Moulin Rouge club, and visited Mrs. Ann Stevens Spalding, a hostess, formerly of Blytheville, at Pickfair, the famous home of Mary Pickford and Douglas Fairbanks. They played at a pool side party at Eddie Fisher’s mansion where they met Natalie Wood and mingled with celebrities. They were also guests of George Hamilton, Spalding’s son, where they had the run of his place, including an underground movie theater.

Dewey helped the band get a part in a Warner Brothers movie starring Roddy McDowall called “The Cool Ones” about a go-go dancer that upstages a singer (Glen Campbell no less) on a Hullabaloo type television show in an attempt at stardom. She later gets paired up with a former teen idol and a hip record producer, played by McDowall. The movie is a send up of the music business in the mid 1960s and follows the duo on their rise to fame and romance.

Shortly before filming, the boys were horsing around in the hotel swimming pool, which had a high dive board. Tommy dove off to scare Handley below, but he sprained his ankle when the two collided. Mr. Dewey smoothed things out with Warner Brothers, who postponed their shoot, but Chessie was furious. In the meantime, the studio was tinkering with the group, dying Handley’s hair black and telling them to present themselves as brothers.

They filmed a full length song to be featured as an audition with McDowall in the movie. They started the song, miming to a track recorded earlier, and McDowall acted like he was in awe. When Handley breaks into the lead guitar part, he comes up behind him, completely unrehearsed, and puts his chin on his shoulder and was breathing down his neck with his eyes bugging out, his mind blown by the groovy solo.

Unfortunately, there was a dispute over who wrote the provided song and the scene was cut. What is left is a gag scene where McDowall is waiting for an elevator and when it opens, T.J. and the Fourmations are crammed in and break into song. They are paired with a young girl singer, who belts out “Hey Hey Ronnie, Twist and Shout” as they file out of the elevator. Shortly afterward, there’s another scene where McDowall is walking down a hallway crowded with other musicians and the band briefly ambush him again. The only remaining trace of their feature is in the background later in the film, where they can be seen walking by while setting up for their audition. 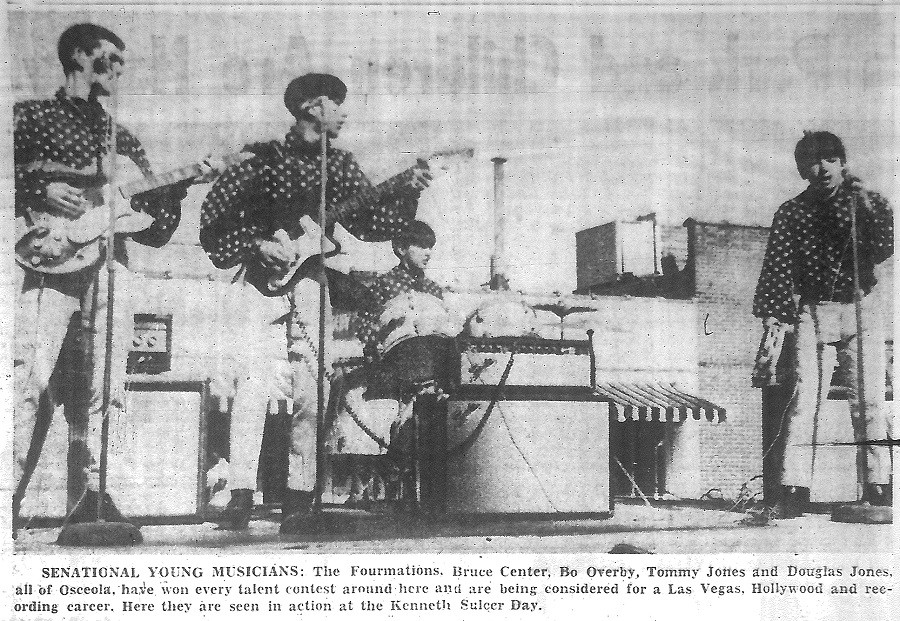 They stayed in Hollywood for several weeks before returning to Osceola. In October of 1966, the group played for the Memphis Symphony Ball where, according to the Commercial Appeal, “all those high society folk frugged until dawn.” They played a sock hop with the Gentrys in Memphis and a showcase with Jerry Lee Lewis and Sam the Sham and the Pharoahs at the Mid South Coliseum. They also appeared on George Klein’s Dance Party TV show in Memphis.

Their Liberty 45 was released in March of 1967. They traveled to Russellville, where the record was #1, to play a wild show where the local teens went mad. In May, “The Cool Ones” played in Osceola with a four day run where the group attended the premiere at Murr Theater to much fanfare.

However, things took a quick turn for the worse when the band’s instruments were repossessed, causing an uproar with the boy’s parents and accusations were thrown around. This forced the group to split up shortly after the release of the film, dooming the almost famous band to obscurity.