The Playboys were a rockabilly-influenced garage band from Pine Bluff, who recorded a single under the name Magnificent Seven for Vee-Eight Records in 1962. The group was founded by Jackie Hendrix, who had been playing piano in a band with Happy Caldwell (later a famous pastor and the founder of the VTN TV network). When most of the group moved away after graduation, Hendrix was left to put together a new one.

Around this time, a singing group in the mold of the Kingston Trio formed, which included Joe Wiginton, Eddie McColgan and Bill Rudolph. They sang at rotary clubs, business and PTA meetings, and appeared on Channel 7. Hendrix approached the trio to join the new band he was starting, the Pine Bluff Playboys, and they agreed. Bill Dunham, a talented local guitarist, joined too, along with drummer David Matthews. A 14-year-old Greg Raley, whose parents owned a music store called Raley’s House of Music in Pine Bluff, was added to the group on bass.

The newly formed band went to Rick’s Armory in Little Rock to hear a rockabilly performer named Johnny Tolleson. He was headquartered at the University of Arkansas at Fayetteville and had recently released a record on the Chance label, “You’re In Love With Yourself.” The band thought Tolleson was incredible and decided to pattern themselves after his group. They learned standards like “Wild Little Willie” and “Little Liza Jane” along with songs by Jimmy Reed, the Coasters, Charlie Rich, Ronnie Hawkins and Ray Charles, basically incorporating most of Tolleson’s set.

They practiced throughout the Summer of 1961 and by fall they were ready to go. Hendrix put his upright piano onto Coke boxes, as he’d seen Tolleson do, so he could stand and play and put contact mics in the piano for an amped sound. The Playboys followed in Tolleson’s shadow and played at frats and proms across the state. In Pine Bluff they played regularly at a dance club called Teen Town.

In 1962, Hendrix wrote to Playboy magazine to ask for decals or anything they could use to promote their band with the Playboy name on it. In response the lawyers at the magazine sent them a cease and desist letter insisting that they stop using the name in all contexts. They already had a trailer with the Playboy logo on it, so they decided to ignore them.

Financed by Greg Raley’s parents, the band booked a session in Memphis to produce a 45 record. Mr. Raley didn’t feel comfortable with the band using the Playboy name on the record so they came up with the Magnificent Seven instead — a reference to the band having seven members, four on instruments and a trio of vocalists. On the A side they did the frat rock standard “Ooh Poo Pah Doo.” The flip-side was an original called “Baby Doll” that had a great rockabilly crossover sound, and was written in the car on the way to the studio by Hendrix and Rudolph. The 45 was released on Vee-Eight Records, a label based in of Nashville. 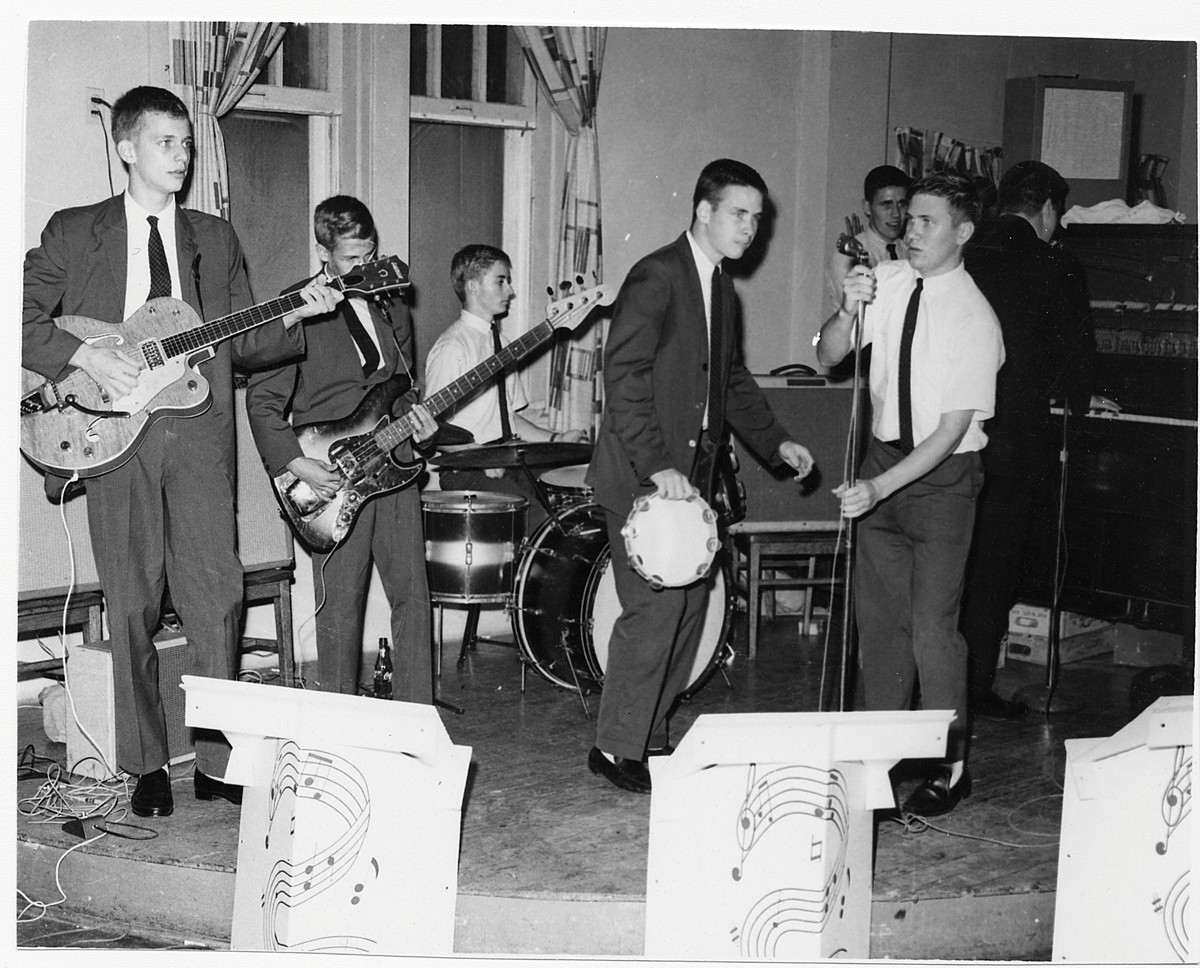 Hendrix was graduating in 1962, so the band set up a special show where they planned to break the world record for the longest performance of the Isley Brothers classic “Shout.” Another band had done something similar around this time, and had gotten good press for it. The event was held at the Oakland Park Tavern in Pine Bluff — they played for hour and seventeen minutes, the same song non-stop. It made the news and the United Press wire service, the ticker news at the time, and was widely accepted as the longest version to date. They had a white sheet at the show that everyone in the audience signed testifying to their version’s length. It was a hot summer night and the crowd did conga lines that went on and on. Where were you in ’62?

Shortly after, Matthews left the drums and Rudolph took over. To replace Hendrix, they recruited Tommy Riggs from North Little Rock. Riggs was a flamboyant local rock radio DJ and was going by the DJ name Tom Payton at the time, later shifting to Rock Robbins when he joined Little Rock’s KAAY. Dunham brought in Riggs after seeing his act in the clubs around Little Rock. He sang and played piano and became the group’s ballad singer, whereas Rudolph sang many of the up tempo numbers. Riggs moved to Pine Bluff and got a job at KPBA, the local radio station. Wiginton and Riggs didn’t get along, so Wiginton split and Matthews soon returned on drums.

Riggs was known for outlandish performances, including a rendition of “St. James Infirmary” that ended with him breaking down and crying profusely on stage. At another show, he brought along a pistol with blanks, and when the lyrics described a man discovering his wife had been cheating on him, Riggs pulled out the gun and fired it. There was no buildup or let-on to the audience, who were understandably shocked. One song that Riggs insisted on playing was a slow blues titled “69,” which featured the refrain, “I really love you baby, but I just can’t do the 69.” They’d frequently get in trouble with the chaperones for this sort of content, but Riggs was into pushing people’s buttons. They got used to getting warned that the house was turning the lights on if they didn’t clean up their songs and get all the dancing to settle down. 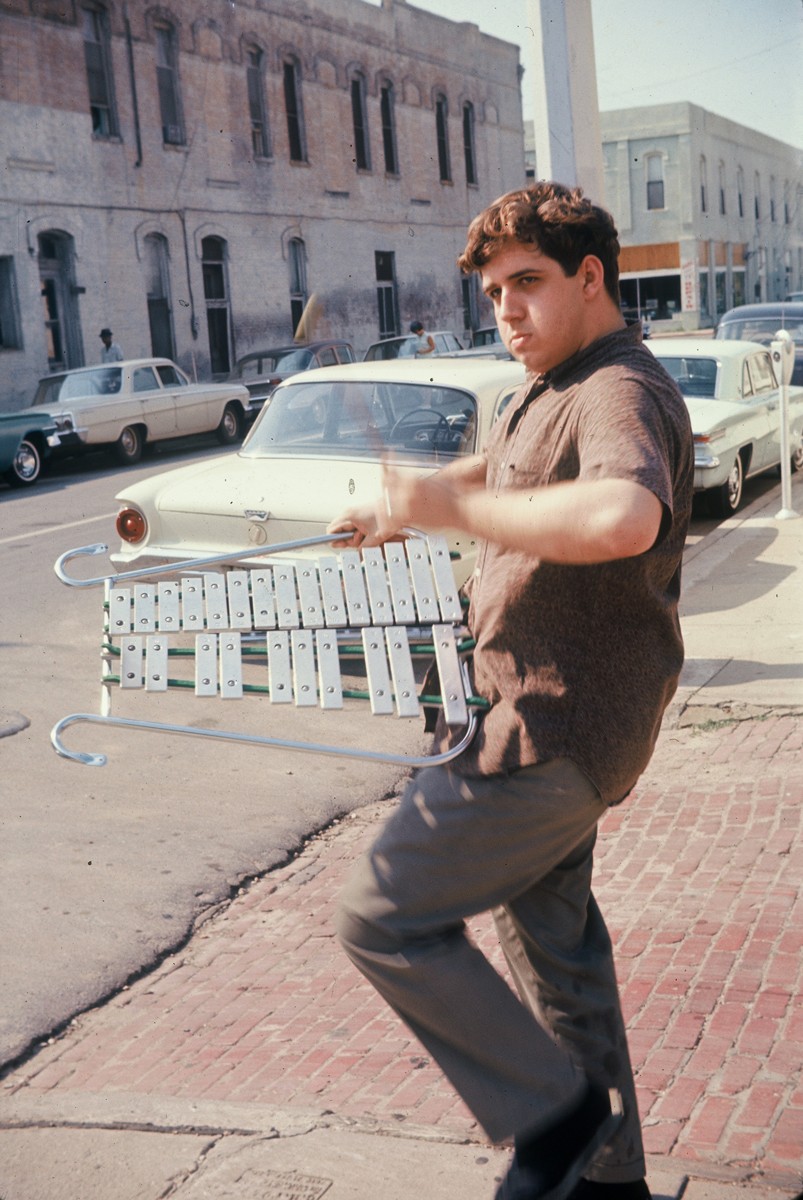 These were the type of performances that Riggs became known for later in his career, documented on an X-rated LP called “Tom & Jerry plus Barbara – The Club Live,” recorded in Little Rock. Its blend of raunchy comedy and songs became Riggs’ trademark.

At the end of the group’s senior year in 1963, the band split up, leaving young Raley behind. Dunham and Riggs went on to form The Kingpins and recorded a 45 on Little Rock’s De’Voice label. Riggs was also a prolific songwriter — his song “What’s Gonna Happen to Me” was produced by Volt Records, a Stax subsidiary, by Jeanne and the Darlings. Riggs and Dunham both had long careers in music.

A behind the scenes figure in the Playboys history was Charlie Okle, who was also a radio DJ in Pine Bluff and a close friend of Riggs’. They co-wrote several songs together, including “What’s Gonna Happen To Me” and “Little Girl,” which Riggs later recorded for Little Rock’s MY records. Okle was a recording enthusiast and documented several Playboys shows on reel-to-reel tape along with songwriting demos. When Okle passed in 2013, his tapes were preserved, and are currently being prepared for CD release by my label, Psych of the South Records, including a wild 1963 show at A&M College in Monticello. The Playboys were last seen performing in 2007 at the 45th reunion of the Pine Bluff High School class of 1962.