When there are so many great local restaurant around, it’s hard to justify eating fast food. Sometimes, though, you need a quick bite, or you need something cheap. When faced with the desire for a quick and inexpensive lunch, I gravitate towards Tropical Smoothie. You may think, oh yes, that’s a decent place to get a healthy lunch at a decent price, but for vegans, it’s a secret treasure. You see, over a year ago, Tropical Smoothie decided to offer Beyond Meat, a vegan substitute for chicken, in all of their stores. Vegan diners can substitute this item for any chicken on the menu. This makes the options far better than the usual hummus wrap or a smoothie.

This summer, Tropical Smoothie came out with two summer wraps that I just had to write about. For a long time, I’ve been able to order their Thai Chicken wrap made vegan, and it’s quite delicious. They recently changed the recipe to favor more fresh ingredients like cabbage and cilantro, which are wrapped up in a sweet chili sauce. You can get this dish as a wrap or a salad, like many of the items on Tropical Smoothie’s menu. The new summer wraps, inspired by Pacific Rim flavors, were even better. The first is a Cha Cha Sriracha Chicken wrap, which had pineapple chunks, fresh vegetables, and a spicy sriracha sauce. The second was the Basil Ginger Chicken Wrap, which had huge pieces of basil and a sweet sauce.

Sadly, those are no longer on their regular menu, although keep an eye out for them next summer. They are always changing the menu and adding new items, though, and the recent Mediterranean Bowl and Roasted Red Pepper Bowl added to the menu are quite good as well. 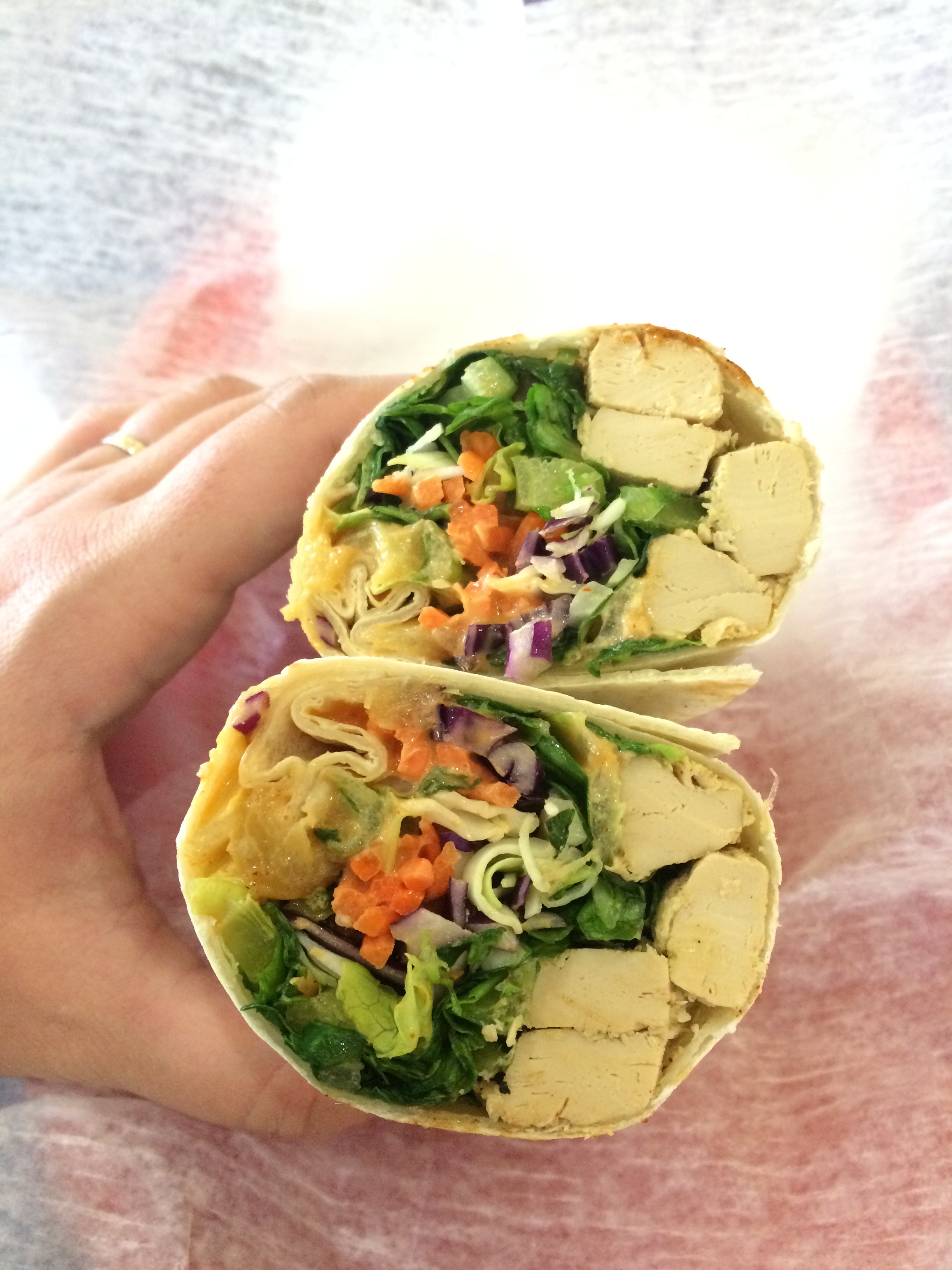 You may be asking yourself, what is vegan chicken, and why would I want to try it? Well, Beyond Meat, the company that has teamed up with Tropical Smoothie, has made it a mission to change the landscape of protein to favor a plant based approach. There are a myriad of reasons people choose to eat less meat, and Beyond Meat has come up with an array of substitutions. The “chicken” strips used by Tropical Smoothie are made from non-GMO soy and pea protein, and they have the texture of an actual strip of chicken. A regular meat eater would not be fooled by this product, but for vegans looking for a boost of protein and a hearty texture to their wrap, this is a great option. The strips also contain no cholesterol, no antibiotics, no saturated fat and are gluten free. So, even if you’re not one to give up meat completely, these are a great alternative to mix into your diet. You can buy these chicken strips, as well as many of their other substitutes, at Whole Foods on Bowman.

With an ever changing menu of creative new dishes, all with easy substitutes to make vegan, you’re sure to find something on the run at any one of the many locations around Central Arkansas. So, when you’re in a rush, or you need a healthy and light lunch, remember Tropical Smoothie. It’s great for in town eating or when you’re on the road, as the locations have been expanding over the past several years.