Read this month's issue
Browse the issue archives
Advertisement
Home Rock Candy Psych of the South: The Retreat Singers’ ‘I Can See’ (1967)

The Retreat Singers were a 1960s folk group based out of Little Rock’s Trinity Episcopal Cathedral, who recorded a hauntingly beautiful album in 1967 about the life of Jesus Christ. Reverend Edgar Shippey, assistant to the cathedral dean, was assigned to the church’s youth group in the mid-60s. During retreats on the Buffalo River, Shippey, who was in his late 20s, directed the teens in song. Some members brought guitars, and their sound blossomed under the guidance of Shippey, who had previously studied Jewish folk music. They started with eight members and began writing a performance piece that incorporated ancient melodies punctuated by readings — personal retellings of biblical stories. Many of the songs had no prior religious association, while others included a 1400-year-old melody from the Apostolic Church and songs performed in Hebrew and Aramaic. Most were somber, incorporating minor keys.

Their first show was at a dinner hosted by the dean, and through word of mouth the group began increasing in size, reaching 28 members by April of 1966. The teens came from five different high schools and needed name tags at first, but quickly became friends. On weekends, they worked at building a retreat cabin on land owned by the church.

Their first album was titled “A Folk Song Life of Christ,” and was recorded at E&M studio on Markham Street, where Earl Fox operated the label MY records. Their bus was dubbed the Holy Roller, and they took it on tour to Washington, D.C. to perform at the National Cathedral in the summer of 1966. From there they turned north to Moose Factory, Canada, to work among the Cree Indians, where they installed a church furnace and instructed over 400 children. In preparation of their trip, they were trained by the Red Cross in emergency rescue and midwifery. All along the way, the group stopped at cathedrals and performed. They wrote songs on the bus, including the folk rock flavored “I Can See.”

In October of 1966, the group was featured in a Life Magazine story about modern religious music. (To some, even at the time, bringing guitars into the church was considered controversial.) That December, they filmed a half hour Christmas showcase for the local television station KARK. The cathedral sponsored the group’s second release, a double album titled “The Retreat Singers in Stereo.”  This follow-up included additions and improvements to the program in a much more refined style. The hard work was evident in the recording, also done by Earl Fox, who used a stereo microphone technique which captured the ambiance of the room. By the time of the recording, the group had swelled to over 50 members as local teens from other churches were invited to join. They added a second bus and named it the Exobus.

Their next mission trip was in the summer of 1967, where they traveled to Miami, and afterward departed for British Honduras — a country then steeped in border tensions with Guatemala. Their projects included building a chicken coop and repainting the Bishop’s offices. Most of the teens stayed at the local YMCA. They learned the regional song “Freetown Girl” and made it a regular part of their set. 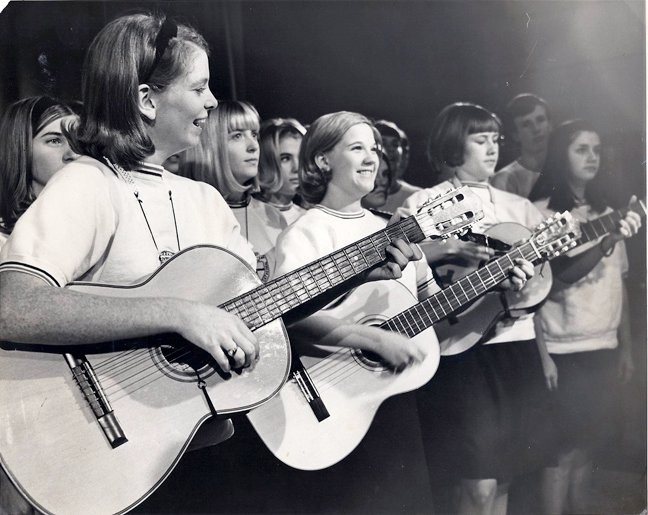 The Retreat Singers continued growing, topping 70 members by the time they planned a trip to England in the summer of 1968. The mission was centered around renovation work at Dolserau Hall in Wales, which would become a home for the aged. They worked together with a local crew and stayed on the property. While in Wales, they performed at the Eisteddfod Folk Festival and appeared on local television. They were asked to do a 30 minute TV special, which was aired all over Great Britain on the BBC.

They were invited by the Archbishop of Canterbury to the Lambeth Conference in London, a meeting of Anglican Bishops, becoming the first group in 500 years to perform in the Great Hall. They traveled to Scotland and Scandinavia, where they performed for King Gustaf of Sweden. The king had an embargo on sound equipment, but he was near deaf, so the singers had to perform right in front of him. 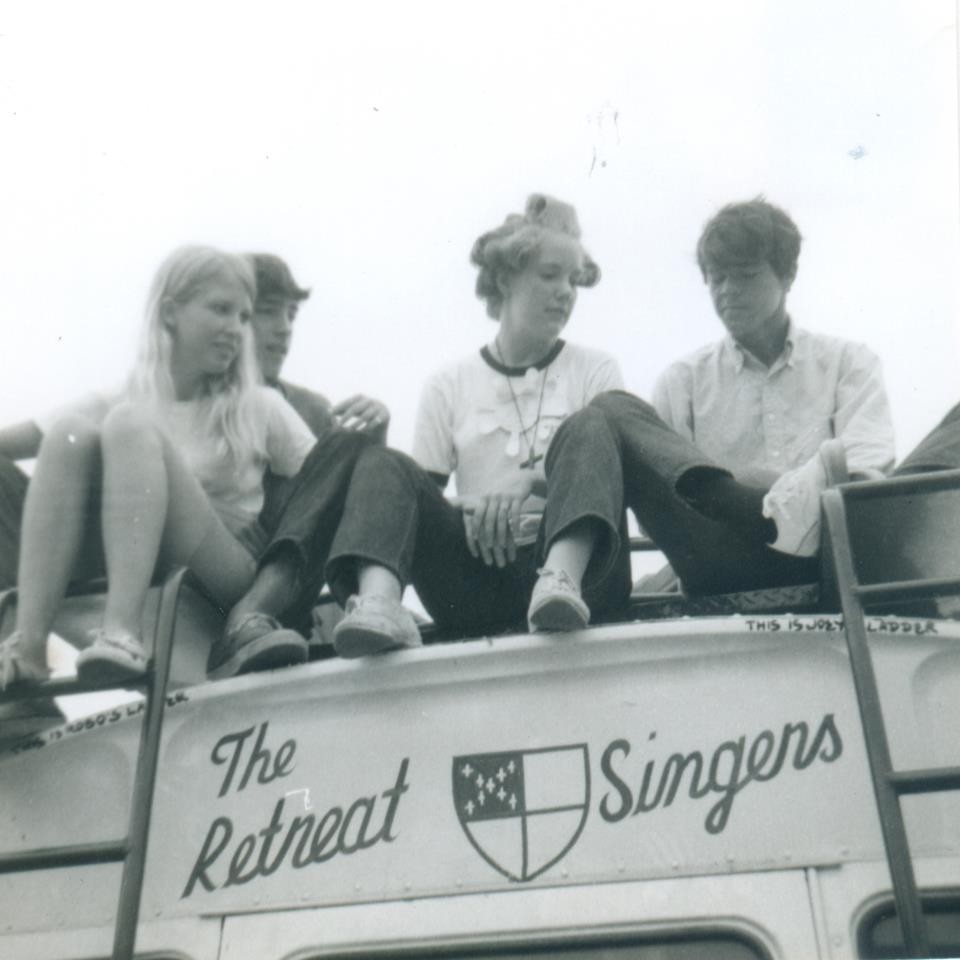 In the summer of 1969, they helped renovate cabins at Camp Mitchell on Petit Jean. They also toured the southeast and helped with the cleanup after Hurricane Camille. Following his divorce, Shippey was relieved of his duties with the Retreat Singers and relocated to Petaluma, California. The church assigned a new priest to the group, but never found another leader who could relate to the teens and their vision. The following summer, in 1970, the singers traveled to Bluff, Utah, to build a school for the Navajo near Monument Valley. They poured the concrete foundation and helped build a school located under a massive cliff.

In the summer of 1971, they took their final mission trip. Many of the original singers had left the group and they had minimal support from the church. The mission was at a fundamentalist orphanage in Hazard, Kentucky, but the teens clashed with the administration and left. The group kept traveling and found its way to Connecticut, where a friend helped set up performances throughout New England. Shortly after their return, the church officially disbanded the group.

The Retreat Singers had their first proper reunion in 1983. They met again in 2012, and each year since, the group — which has consisted of approximately 130 members over the years — has held a small reunion on New Year’s Eve, at which they sing “Auld Lang Syne.” 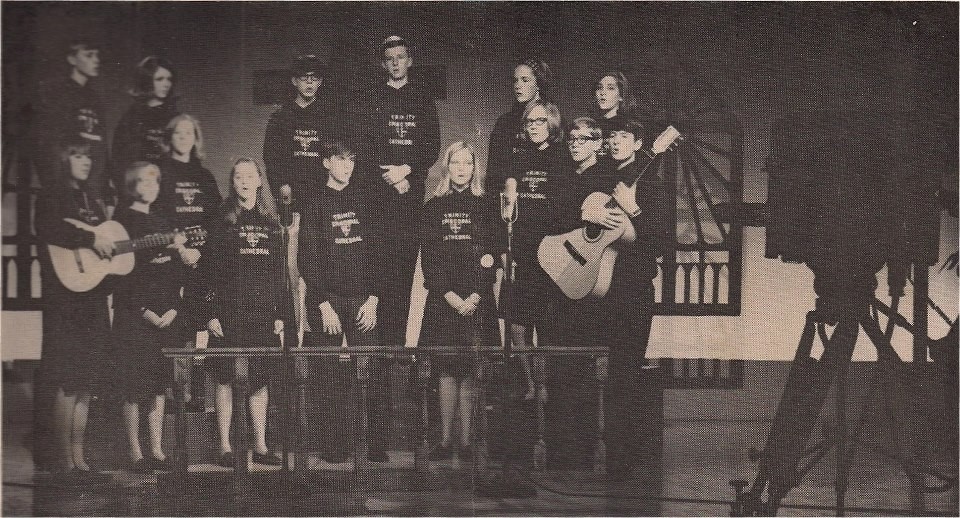