This time around, always-popular country star Carrie Underwood — no stranger to Verizon Arena in North Little Rock — was surrounded.

The arena Thursday night was set up with an elongated stage in the middle of the floor so she could perform in the round with audience members on all sides. Here are a few takeaways from the Arkansas stop on her highly entertaining 2016 Storyteller Tour — Stories in the Round, which also featured Easton Corbin and the Swon Brothers.

Carrie-ing Through: Amid all the lasers and risers and spotlights and smoke and special effects, Underwood delivered one heckuva show. Her huge talent and powerhouse voice, along with the terrific lighting, great staging and flashy costumes (more on those in a minute), produced plenty of memorable moments and images for the appreciative (and at times thunderous) crowd of 10,049. There’s a reason the “American Idol” winner and former Academy of Country Music Entertainer of the Year has seven Grammy awards and a lengthy list of hits: She belts ’em out and sings with power and passion.

The Top Hits: Pretty much pick your favorite Underwood song and she sang it and made it special, from the personal, touching “What I Never Knew I Always Wanted” and the darker side of “Renegade Runaway” to the scorching “Church Bells” (her new single) and the rocking “Cowboy Casanova,” which warns of a guy who “looks like a cool drink of water, but he’s candy-coated misery.” She had the crowd singing along on the woman-done-wrong crossover smash “Before He Cheats,” the 2007 Country Music Association Single of the Year. And if you wanted a story song, the edgy, bluesy “Choctaw County Affair” — with Underwood playing a pretty mean harmonica — more than fit the bill.

Covering a Lot of Ground: Artists like Underwood always have a huge pile of hits to play, but it’s always fun when they take time to pay tribute to acts that have influenced them along the way by performing a cover or two. She brought Corbin and the Swon Brothers back out for a crowd-pleasing version of the Nitty Gritty Dirt Band’s “Fishin’ in the Dark” and put her own spin on the iconic “I Will Always Love You,” which was a lot more Dolly Parton than Whitney Houston. Earlier, Corbin pleased with powerful covers of George Strait’s “Check Yes or No,” Toby Keith’s “Should’ve Been a Cowboy” and Alabama’s “If You’re Gonna Play in Texas (You Gotta Have a Fiddle in the Band).” 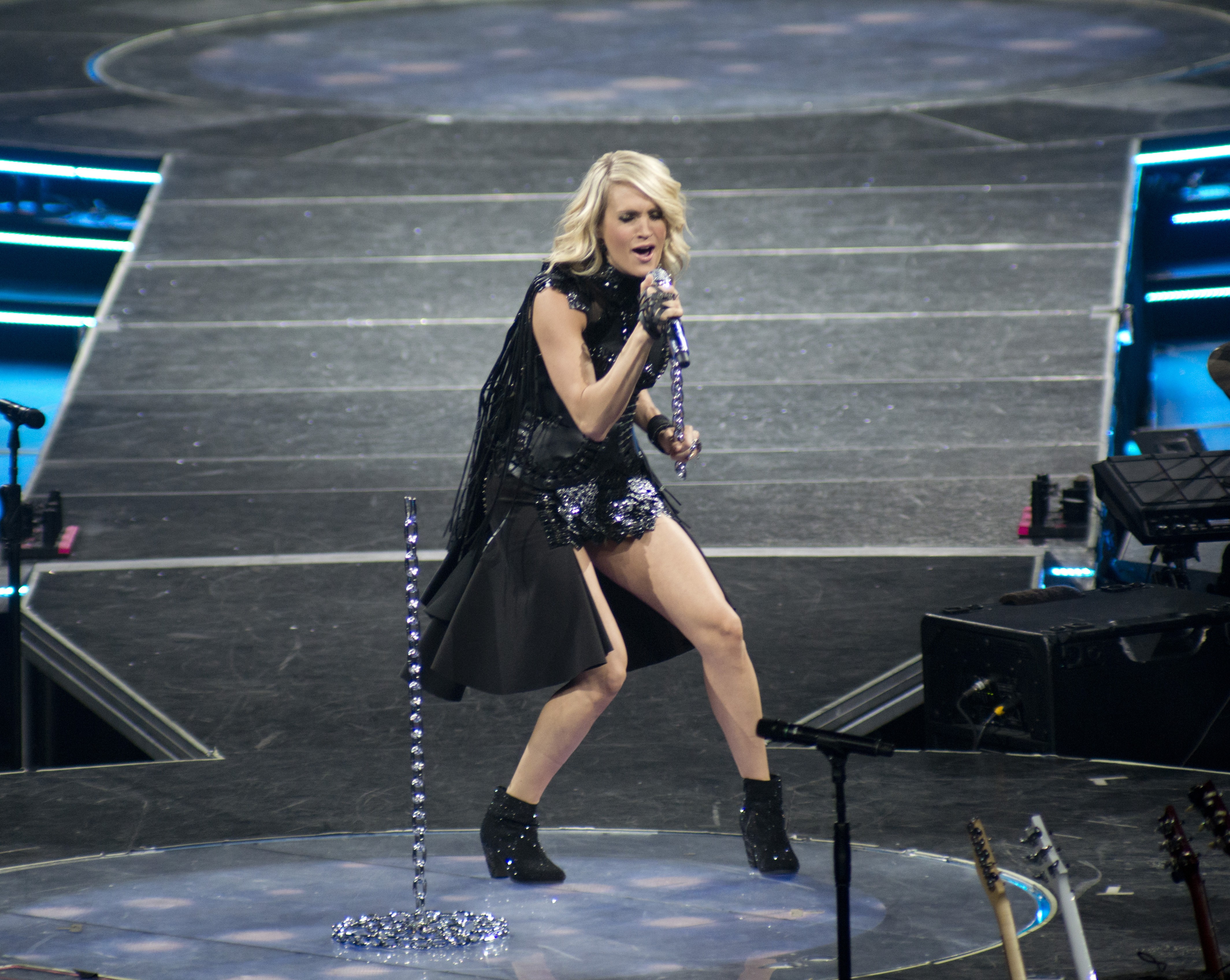 Dressed to the Nines: Well, OK, maybe to the sevens. By our count, that was the number of times she changed outfits, which included altering one a tad. The highlight? Well, that little black number she wore at the end of the show was a stunner, but there was an eye-catching red one earlier that was also spectacular and that skimpy black one at the beginning and, well, we’re pretty sure all of them in their glittery, sparkling glory were meant to blow us away. Goal accomplished.

The Encore: Underwood saved a pair of big numbers for her show-stopping finale — “Smoke Break” and the inspirational “Something in the Water” about turning to a higher power in uneasy times. The latter is a bit reminiscent of her early smash “Jesus, Take the Wheel,” a crowd favorite that she sang earlier in the show.

Easy Does It for Easton: We’ve been expecting Corbin and his traditional-country voice to find a bigger audience ever since he hit the country scene back in 2009 with the No. 1 hit “A Little More Country Than That” (still a mainstay of his set list). Maybe that’ll happen one of these days, but in the meantime it’s good to see him on tour with a major star and getting a decent amount of time (almost 40 minutes) to showcase many of his top releases, like “Roll With It” (his other No. 1), “Lovin’ You Is Fun,” “All Over the Road,” “Baby Be My Love Song” and his new single, the beautiful “Are You With Me,” that he said is one of his favorites. Corbin, a former Florida farm boy and FFA member, has a smooth, easy-going vocal style that is — dare we say it — unashamedly country. We shamelessly enjoyed it.

Swon Songs: The Swon Brothers, Zach and Colton, real-life brothers from Muskogee, Okla., opened the show. With crisp vocals and tight harmonies, they pleased with numbers like “Later On,” “Throwback” and “Just Another Girl.” But, speaking of covers, we were hoping for at least a verse of “Okie From Muskogee,” the way the guys did it when they came in third on the fourth season of NBC’s “The Voice.” We’ll chalk it up to not having enough time in their brief 20-minute set.