Read this month's issue
Browse the issue archives
Advertisement
Home Eat Arkansas Dave and Buster’s is finally here; we’ve got the deets on the... 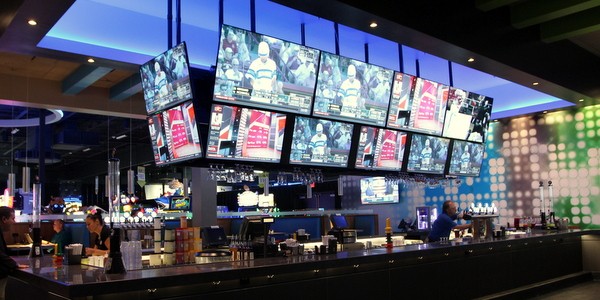 There’s been a lot of hype about the coming-home of Dave & Buster’s, an adult playland and eatery chain with roots all the way back to the Train Station here in Little Rock . The space, which opened June 13th at 11 a.m., can host up to 400 patrons at a time and is packed with 144 different games (many of which offer reward tickets that can be redeemed for prizes), dozens of over-sized televisions tuned to all sorts of channels with every sports package imaginable and a constant soundtrack of driving tunes that add to the game-fueled adrenaline rush from the moment you step in the door.

Several things delineate Dave and Buster’s from more adolescent adventures at Chuck E. Cheese or Playtime Pizza. For one, no one under 18 is admitted without an adult of 25 or older, which should eliminate drifts of sullen teenagers and rowdy children (though yes, I will be taking my seven-year-old daughter, and she’ll probably kick my butt at Skee-Ball). For two, the bar menu’s a book full of brightly colored concoctions of varying potency meant to spark the young adventurer in all of us (yes, even I had to dabble and enjoy a bit of a pineapple coconut Glow Kone, because who wouldn’t?).

And for three, the menu is meant to bring in people to dine and have fun even without a Connect Four battle or run at the new Ghostbusters shooter game. It’s pub fare meets carnival food, with a smattering of salads to make you feel good. And, because I care so much about y’all, I tackled it with the assistance of photographer Grav Weldon and videographer Leif Hassell. What, you think I could manage all this on my own?

Here’s a rundown of the items we sampled.

The Lawnmower. This immediately caught my attention. I mean, I could have grazed on this all morning and been very, very happy. It’s a deconstructed salad with a lettuce base, and probably the healthiest thing you can order for a crowd at Dave and Buster’s. Rows of chopped and diced tomato, green bell pepper, radish, avocado, hard-boiled egg, grilled chicken, bacon, blue cheese, red onion, cucumber and red bell pepper all lined up gorgeously. Great for a crowd. 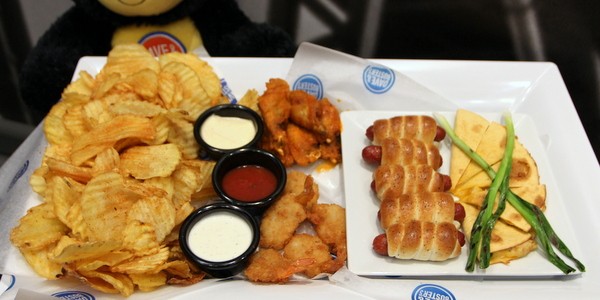 Fives All Around. The perfect companion piece for The Lawnmower is a selection of five appetizers in one oversized order. I loved up on those Pretzel Dogs, all-beef weiners wrapped in pretzel dough served with spicy habanero sauce – though I found myself dipping them in the chipotle honey mustard from the fish and chips. Chicken quesadilla wedges are a little better than average, grilled in cheddar-jalapeno tortillas. I’m not much for Buffalo wings but these were all right (better with the blue cheese sauce in my opinion) but the crispy shrimp was spot-on and the barbecue chips were excellent. 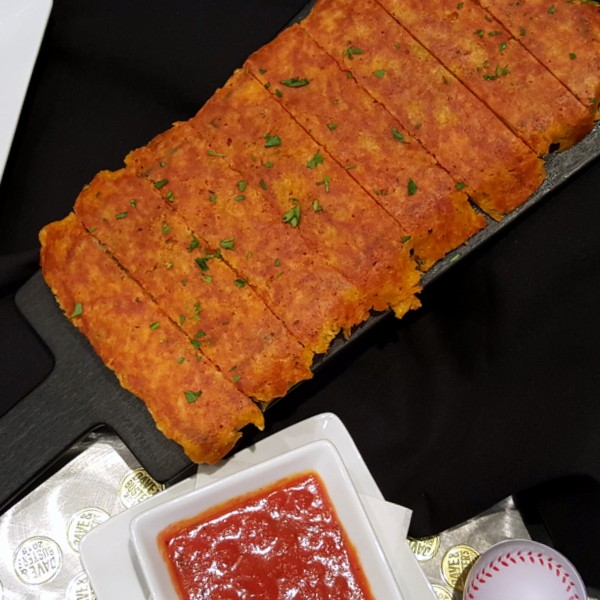 Three Cheese Grilled Cheese Sticks. Dave and Buster’s cheesy offerings taste a little different, thanks to the franchise choice of Manchego as part of its holy triad. Here, it’s paired with mozzarella and cheddar as the cheese between slabs of sourdough bread that’s also cheese-infused, then cheese-covered and griddled and served with a light tomato-basil marinara (we’re talking salsa-light marinara). Yeah, I could see myself ordering just this if I were on an epic Skee-Ball roll. Which I sometimes am. You’ve been warned.

Pepperoni Pretzel Pull-Apart. It’s like a pretzel braid but with pepperoni and mozzarella and marinara to dip it in. Nice. 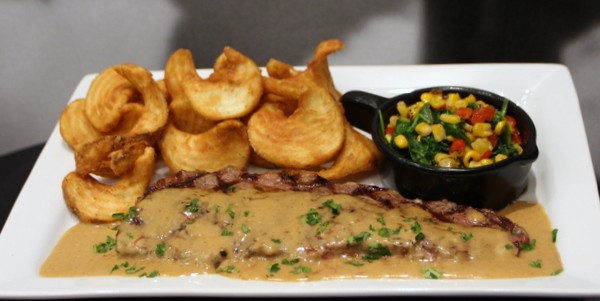 New York Strip Steak Frites with Creamy Marsala Wine Sauce. There’s something about the way Dave and Buster’s serves up food that just calls for sharing plates. This dish certainly qualifies – a tenderized New York strip steak cooked to order, doused with a creamy marsala, so easy to slice across the grain. The wine wasn’t too overpowering for the steak, a concern I have for smothered beef, and it paired well with the sidewinder fries. The spinach and corn salsa was a happy surprise, a nice hearty counterpoint to the dish. 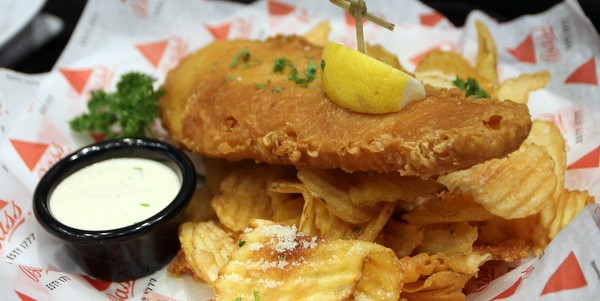 Bass® Ale Battered Fish & Parmesan Potato Chips. An eight-ounce Pacific cod fillet – yes, eight ounces! – served over American chips instead of English chips, er, fries. The ale doesn’t add a whole lot of flavor to what you might expect on the batter, but it’s enough. This should satisfy most fish-and-chips fans. 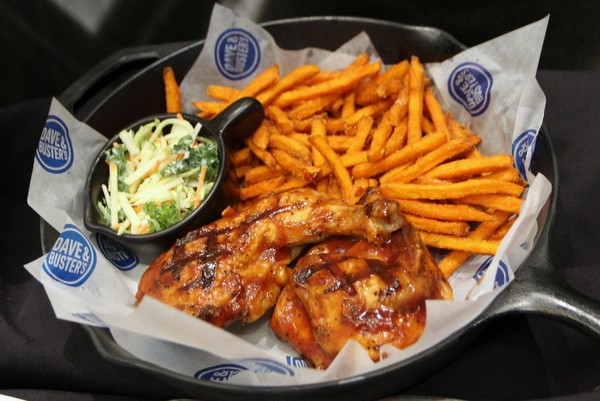 Angry Orchard® Hard Cider BBQ Half Chicken. Best thing I had throughout. The hard cider barbecue sauce is really, really good and matches well to, of all things, sweet potato fries. And the chicken, of course. I could take or leave the buttermilk ranch slaw, though, which would have been better on a sandwich. That’s what slaw is for, right? 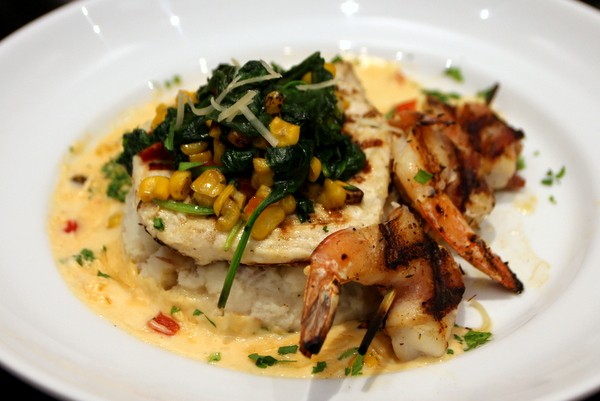 Grilled Chicken & Bacon-Wrapped Shrimp with Lobster Sauce. I joked about this on Instagram, but it’s true – this dish is ALL THE THINGS. You have a nice grilled chicken breast perched on top of a pile of garlic mashed potatoes. Top that with some of that corn and spinach sauté. Not enough? Drop on a skewer of bacon wrapped shrimp. Still not enough? Ladle on some pink and fantastic creamy lobster sauce. That’ll do it. And yes, if you’re pork-sensitive like me, they’ll give you the grilled shrimp without bacon instead, though my dining companions insisted bacon-wrapped was the way to go.

Tenderloin & Bacon-Wrapped Shrimp with Smoked Chile & Tomato Cream Pasta. Yet another ALL THE THINGS dish, this time with chunks of beef tenderloin and medium-sized bacon-wrapped shrimp amongst cavatappi pasta with spinach and tomatoes in a tomato cream sauce.

Buffalo Wing Burger. I’m not a fan of Buffalo wings… usually the flavor of the hot sauce within is just a bit too tangy or matched inappropriately with its base. But this one’s light enough not to bug me. However, this entire dish may be one big case of gilding the lily. It’s Buffalo-sauced chicken on top of a seasoned burger patty with blue cheese, onion strings and celery. Mind you, it’s pretty good, but I found I enjoyed the ingredients more separately.

Hottie Burger. I’m not even going to take credit for trying this. It’s an overkill of ridiculous hotness, with jalapeno and poblano peppers and pickled jalapenos, Sriracha mayo, Applewood smoked bacon, Manchego and cheddar cheeses. It’s heartburn on a plate for those of us with sensitive bellies…but somehow, it’s still not hotter than the Inferno Burger. Dare your friends. 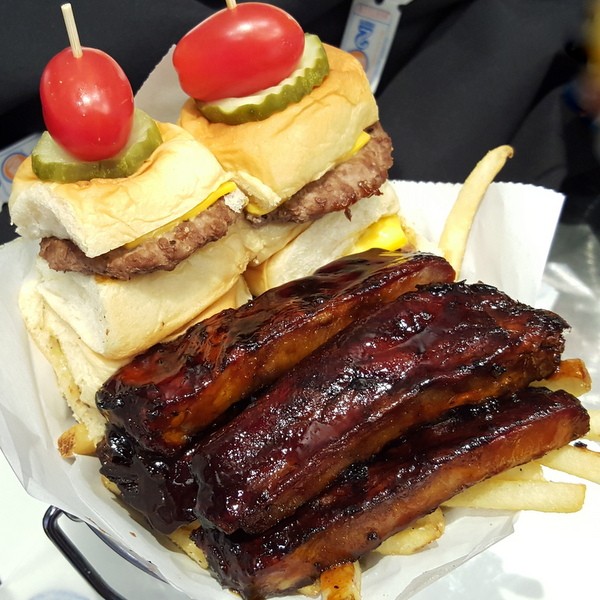 The Caveman Combo. From what I understand, this is a half order. And somehow, my companions got theirs wrapped in bacon – whether this was a choice on the part of Dave and Buster’s or a point on the tenacity of my dining companions I cannot tell you, but what I can report is that the chili sweet soy barbecue sauce is a winner, and Leif declared the ribs his favorite dish. I dug the little sliders with their pickle tops.

Classic Goldfingers. Gold…finger! (I can’t look at the name without hearing that famous James Bond tune) yep, just chicken tenders with fries, but a very good version. The chipotle honey mustard is excellent… spread that stuff around some, put it on your fries, yeah buddy. 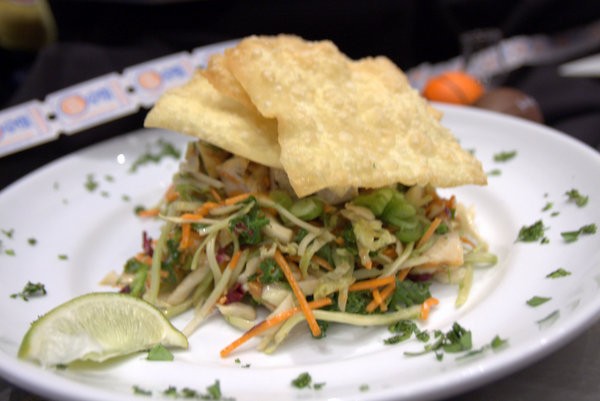 Thai Chicken Chopped Salad. Before this visit, this was my favorite Dave and Buster’s meal, and I have often ordered it while visiting locations elsewhere. The Thai peanut dressing stars in this mélange of shredded vegetables, sprouts, scallions and cilantro, and the grilled chicken is tender. And hey, anything with fried wonton crackers is going to stir my interest. 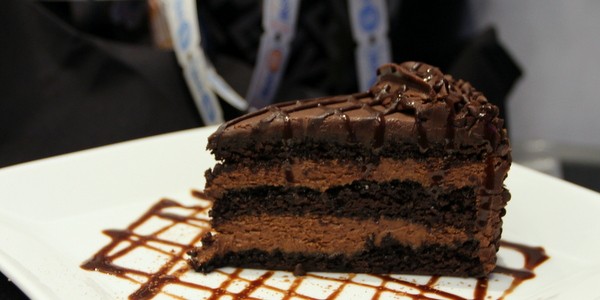 Triple Layer Chocolate Cake. Not cloyingly sweet like some examples, this one’s moist and everything you’d hope to get out of a slice of chocolate cake. A good version.

Bananas Foster Pie. I sometimes get into trouble with people who claim I’ve never met a pie I didn’t like (I have, incidentally, encountered fantastically bad pies, I just don’t share them). Well, this one, I like. I like a lot. It’s all the flavor of caramelized banana and cinnamon and such without the overdone banana flavoring or the mess of bananas foster. A winner.

Pineapple Coconut Glow Kone. No, really, I tried alcohol. Please, go revive that lovely elder lady in the stands, I know it’s a shock. But Dave and Buster’s has such a thick drinks menu, it seemed wrong somehow not to sample the beverages. That being said, this one was a blend of Malibu® Pineapple rum, Malibu® Coconut rum, New Amsterdam® Coconut, lime and Coco Reàl® cream of coconut, all over shaved ice and a color-changing light cube. It’s novel, it was tasty, and it provided some lovely photo ops. That being said, if I hadn’t practiced moderation I’d have quickly found myself on my butt. That sucker was stout. 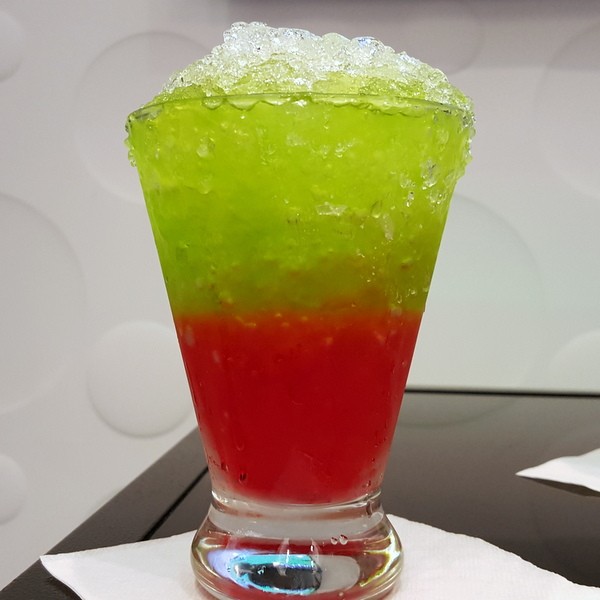 Watermelon Snow Cone. I must point out that Grav is allergic to real watermelon. But this? Yeah, he did this. A combination of Smirnoff® Watermelon vodka, Midori®,DeKuyper® Watermelon Pucker® and a splash of Sprite, this looked like it should have tasted like a watermelon Jolly Rancher but was instead a bright and surprising liquid Pixie Stix instead. I’d order this again, after I made sure someone else had my keys.

So that’s a rather expansive overview for most restaurants – but we didn’t even get a third a way through the Dave and Buster’s menu. There are a lot of salads, burgers and such we didn’t touch, as well as a plethora of desserts and, oh, almost all of the drinks menu. That’d take a lot more time for research. And a designated driver. And probably a week.

Dave and Buster’s also offers an Eat and Play Combo Menu, where you purchase an entrée and play card at a combined price. If you’re in for playing all night, this is a pretty good deal. Alternatively, you can use tickets to purchase appetizers and desserts – yes, the tickets you just won on the games. That is, if you don’t want to take home a giant unicorn or Beats By Dre headset.

Dave and Buster’s Little Rock is open Sunday–Thursday: 11 a.m.–midnight and Friday–Saturday: 11 a.m.–2 a.m. Some things to note–Happy Hour is 4:30-7 p.m. Monday-Friday, and there’s a Late Night Happy Hour from nine to close Sunday through Thursday nights. Games are half price on Wednesday. And the place offers $2 Taco Tuesdays.