Read this month's issue
Browse the issue archives
Advertisement
Home Eat Arkansas Down @ The Corner, breakfast is a treat

Diner-meets-farm-to-table cafe @ The Corner has occupied the corner of Markham and Scott Street in downtown Little Rock for a few months now, and business seems to be brisk. The family owned-and-operated business’ success is thanks to the hard work of a team that consists of mother, father, a couple of siblings and an in-law, all of whom are present and responsible for daily operations. After hearing much positive chatter about the restaurant, a group of my friends gathered this week for their Sunday brunch.

We arrived at nearly the exact opening moment of 10 a.m., and there was already a line forming. The set-up is of the order-at-the-counter-and-pay variety; the food is brought to your table. The bright space is decorated in a classic red diner motif, and though they pack a lot of tables in, it feels energetic rather than tight. Given the number of people rolling in, the ordering process was efficient and the food delivered quickly.

Though they don’t exactly provide full table service, if you need something you can’t get yourself (such as a to-go container), there’s always someone walking around to check on diners who’s happy to grab whatever it is you need. 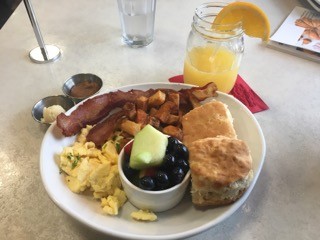 I ordered the Sampler of the South, which included a fruit cup, two pieces of bacon, cheese grits, a biscuit, scrambled eggs and hash browns. This is where I admit to you that I’m not inclined to eat grits all that often, so I replaced them with an extra biscuit. This classic collection of breakfast foods was hearty and artfully prepared. I think the environment the food comes from impacts its flavor, so I can only imagine the eggs came from a very happy chicken, and the thick-cut Arkansas bacon came from happy pigs.

The flaky biscuits were a delight—the kind that, even simply buttered, would make for a pleasant meal in and of themselves. The fruit spread was a cinnamon-apple butter that fooled me into momentarily believing it was fall.

One friend ordered the special pancakes of the day—graham cracker pancakes with chocolate sauce, graham cracker dust, and a homemade marshmallow on top. I not-so-secretly stole a bite, and given how sweet the description sounds, the end result was not overpowering. The very thick pancakes were dense and wheat-y, and the chocolate sauce was pleasantly sweet as opposed to syrupy. The slightly salty flavor of the graham cracker dust contrasted well with the rest of the dish, making for pancakes that were much more complex than we initially assumed they would be.

My other friend was kind enough to order the Brunch Poutine, which she first had and fell in love with in Canada. Luckily, the Arkansas version did not disappoint. Featuring cheese curds and brown gravy with a sunny-side-up egg over home fries, this dish was really made by the not-too-salty gravy in combination with the seasoning on the fries.

Though a couple of us thought our tickets totaled a bit more than we’d expect for breakfast food, the brunch shined brightly enough to quickly make us forget about the receipts. All in all, @ The Corner is a go-to for brunch, with great food, fast and friendly service, and a lively atmosphere.