Composer Tania León and historian Henry Louis Gates Jr. spoke last night to an enthusiastic and plentiful crowd at University of Central Arkansas’s Reynolds Performance Hall last night, preceding the performance of four excerpts from León’s in-progress opera “Little Rock Nine,” with a libretto by scholar and playwright Thulani Davis. Vocalists Kendra Thomas, Ronald Jensen-McDaniel, Candice Harris and Nisheedah Dévré Golden, equipped with coaching from León before the event, performed arias from Act I of the in-progress opera, with Paul Dickinson at the piano. The performance and lectures were followed by a conversation with Gates and León, moderated by UCA’s Dr. Donna Stephens.

After a brief and expository introduction to the events of Central High School’s desegregation in 1957 that form the plot of the opera, Gates took the podium, describing the process of collaboration between he and UCA College of Fine Arts and Communication Dean Rollin Potter when the idea first emerged in 2011. (Notably, Gates won over the crowd by admitting that for some portion of that years-long collaborative process, he’d assumed Potter was black — and, alluding to his own role as host of the genealogy-focused PBS’ “Finding Your Roots,” jokingly offered Potter a “free DNA kit.”)

Gates quoted liberally from W.E.B. Du Bois, an opera fan himself and a fierce admirer of Wagner’s operas, noting the impact that Du Bois and James Weldon Johnson had on the introduction of art reflecting the African-American experience into the wider American consciousness. “Music has been the sound of our revolutions,” Gates said, noting Johnson’s authorship of “Lift Every Voice And Sing,” first performed at a birthday celebration for Abraham Lincoln in 1900 and now often referred to as the “Black American National Anthem.” Then, Gates read an excerpt from his memoir, “Colored People,” about watching the 1957 events on television.

In 1957, when I was in second grade, black children integrated Central High School in Little Rock, Arkansas. We watched it on TV. All of us watched it. I don’t mean Mama and Daddy and Rocky. I mean all the colored people in America watched it, together, with one set of eyes. The children were all well-scrubbed and greased down, as we’d say. Hair short and closely cropped, parted, and oiled (the boys); “done” in a “permanent” and straightened, with turned-up bangs and curls (the girls). Starched shirts, white and creased pants, shoes shining like a buck private’s spit shine.

Gates went on to speak about the opera’s development, several years in the making, saying, “Nothing like this has ever been tried before. We are witnessing history being turned into art, and art is making history right here in Conway.”

Then, as pianist Paul Dickinson took his seat at the piano bench, Opera in the Rock vocalists Nisheedah Dévré Golden, Kendra Thomas, Candice Harris and Ron Jensen-McDaniel entered the stage, pantomiming the excitement meant to be conveyed in “Little Rock Nine,” the opera, Act I, Scene 3. One by one, they took to the footlights, performing short, introspective arias from León’s angular score, embodying Melba Patillo (Thomas), Jefferson Thomas (Jensen-McDaniel), Minnijean Brown (Harris) and Elizabeth Eckford (Golden). The arias, for all their sparseness and woven-in silence, required great vocal feats, complete rhythmic precision and death-defying interval leaps from the singers, who handled them with aplomb. Especially memorable were Jensen-McDaniel’s reverent and glorious treatment of the dissonant last note of Jefferson Thomas’ aria “I raised my hand, I was a track star,” and Golden’s sugar-sweet slide on the line “My folks won’t play that,” meant to reflect Eckford’s hesitation to tell her parents she’d signed up to participate in the integration process: “I had to think, I wanted to be sure.” 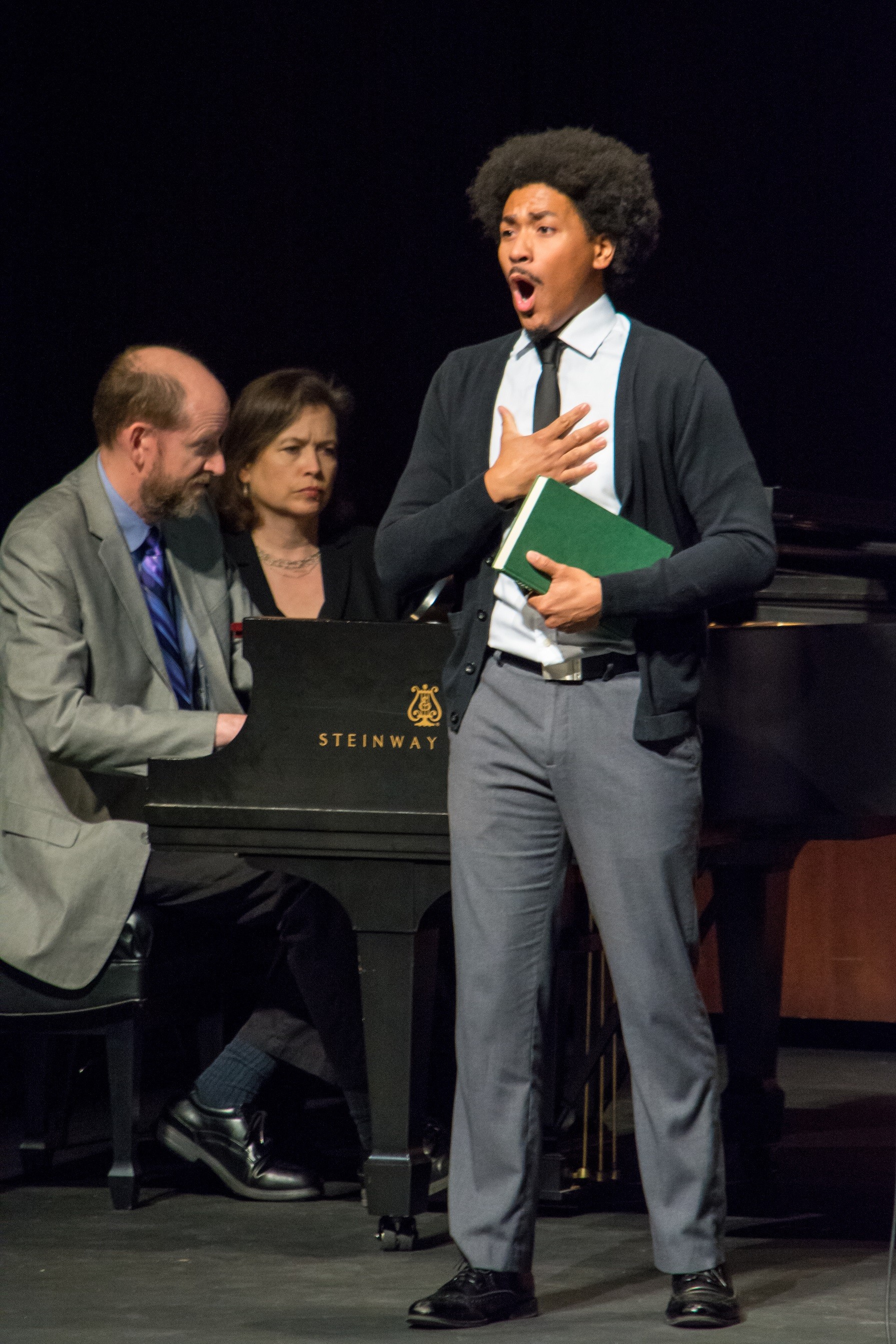 León’s score, to my ears, seemed wildly difficult in this scene, but also wholly appropriate as a soundtrack to the reeling, apprehensive mindsets of four students about to launch themselves into an impossibly treacherous social situation — and about to etch their own names into the history books.

“These nine lives could be ours,” León said following the performance. “I could be one of them.” And it wasn’t a stretch, especially for León, whose entry into the United States from Havana, Cuba, 50 years ago has created its own set of obstacles to overcome. (For more on that, see our Q&A with the composer, published in the September 21 issue of the Arkansas Times.)

“Planet Earth is an island in the universe,” León said. “So, from that point of view, realizing how minute we are and how we sometimes feel like we are so big, that idea is what I would like to bring about, and the ideas that Thulani has given me to work with empathy and compassion.”