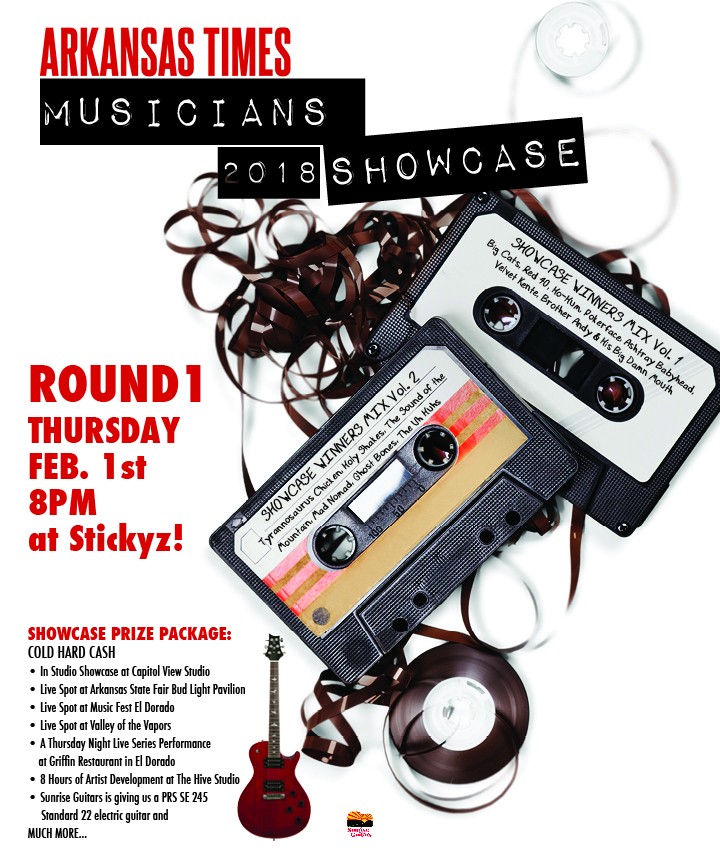 This year marks the 26th anniversary of the Arkansas Times Musicians Showcase, inaugurated in 1993 by the now-defunct Spectrum Weekly and handed over to the Arkansas Times around 1997. The winner that year was Substance, a Towncraft-era band from Sherwood whose members would later join Big Cats and Red 40, and whose track “Do Nothing King” appears on an LP compilation (also named “Towncraft”) documenting the ’90s punk scene in Little Rock.

In advance of the 2018 showcase, nearly 60 bands sent us links to their work for consideration. Some were names we’d heard before and written about, and some were complete surprises. We’ve narrowed those submissions down to 19 bands, each of whom will perform in one of four semifinal rounds to be held each Thursday night in February at Stickyz Rock n’ Roll Chicken Shack. Semifinalists will be judged in four categories: songwriting, musicianship, originality and showmanship. This year, the crowd will get the chance to weigh in, too, and add their votes by way of a written ballot to each band’s totals for the evening.

The winner of each of those semifinal rounds, as well as a “wild card” winner (the top-scoring semifinalist who did not win their particular semifinal round) will advance to the final round, to be held at The Rev Room on Friday, March 9.

The winner of that final round will be named the 2018 Arkansas Times Musicians Showcase champion, and will receive a prize package including: cold hard cash, an in-studio showcase at Capitol View Studio, a live spot at the Arkansas State Fair Bud Light Pavilion, a live spot at Musicfest El Dorado, a live spot at Low Key Arts’ Valley of the Vapors Independent Music Festival in Hot Springs, a Thursday Night Live performance at Griffin Restaurant in El Dorado, eight hours of artist development at The Hive Studio, a PRS SE 245 Standard 22 Electric Guitar from Sunrise Guitars and more.

The list of 2018 semifinalists is as follows. Artists are listed first to last in order of appearance on each night.

See you this Thursday night, and keep an eye out for a post on our Rock Candy blog and Facebook page introducing our judges and emcee!