FCMF is an incubator of sorts for burgeoning musicians; up until this year, it was designed and programmed for string students only, and now it includes wind instruments like the clarinet and the flute. The organization, which merged with the Chamber Music Society of Little Rock in 2016, is in its twelfth season.

There’s a lot that young musicians don’t learn in the course of their private instruction: the historical context of the works they’re learning to play, professional etiquette in a musical ensemble and shorthand cues that they’ll need to understand in order to keep up with the pace of an intense symphony or orchestra rehearsal. They receive coaching, take master classes, compose their own music trivia. This week, they’ll even have an improvisation workshop and a yoga class with Arkansas Yoga Collective.

“We really try to push all of their limits,” FCMF Director/Associate Conductor of the Arkansas Symphony Orchestra Geoff Robson told us. “A lot of the music is just a step above where they thought they were. So what you’re seeing here is really the crux of what goes on, to learn how to interact with each other professionally.”

When we stopped by FCMF’s 2018 session Thursday at noon, FCMF Faculty Member, composer and cellist Jeremy Crosmer led a septet – two violinists, a violist, a cellist, a bassist, a trumpet player and a pianist – in rehearsal of a few short bars of music, adding a bit of nuance with each repetition. “We’re adding a rest now, but play the first note the same length you did before.” They do, and the attack is cleaner this time. “Yeah, something’s different now,” Crosmer said. “Everybody’s listening.” 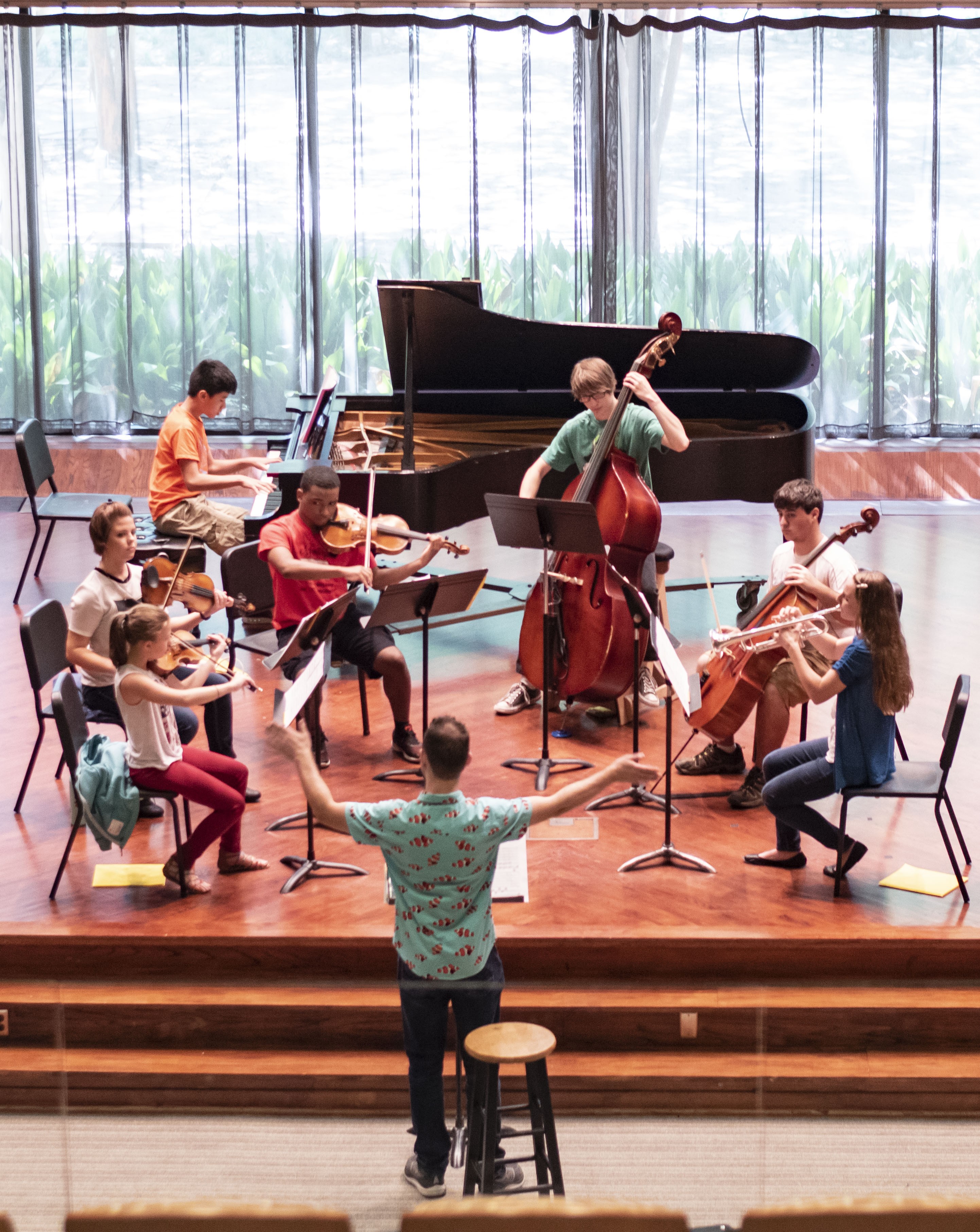 That group was one of six small ensembles playing in the Fine Arts Building for FCMF’s mid-day group workshops. Some of them squeezed around music stands in a faculty office, others stood in a circle in one of the building’s carpeted studios. “It’s this huge jigsaw puzzle,” Robson said. Each student is in two groups throughout the day camp, he told us. “When the kids enroll, they have to send me a short video of their playing, and they’re matched into groups based on skill, experience and, to a lesser extent, age.”

In the choir room, pianist and FCMF Faculty Member Andrius Zlabys rehearsed four violinists and a pianist, beginning with a “Measure 30; can we do that?” He waited for what felt like too long a silence. One of the young musicians wasn’t quite ready, and Zlabys was modeling a crucial element of ensemble playing: look, listen and be sure everyone’s ready to come in together.

“That’s absolutely part of the process,” Robson said. “Once you’re a little bit older and doing this on your own, you have to have those kinds of sensitivities. It’s just a built-in respect for your colleagues.” 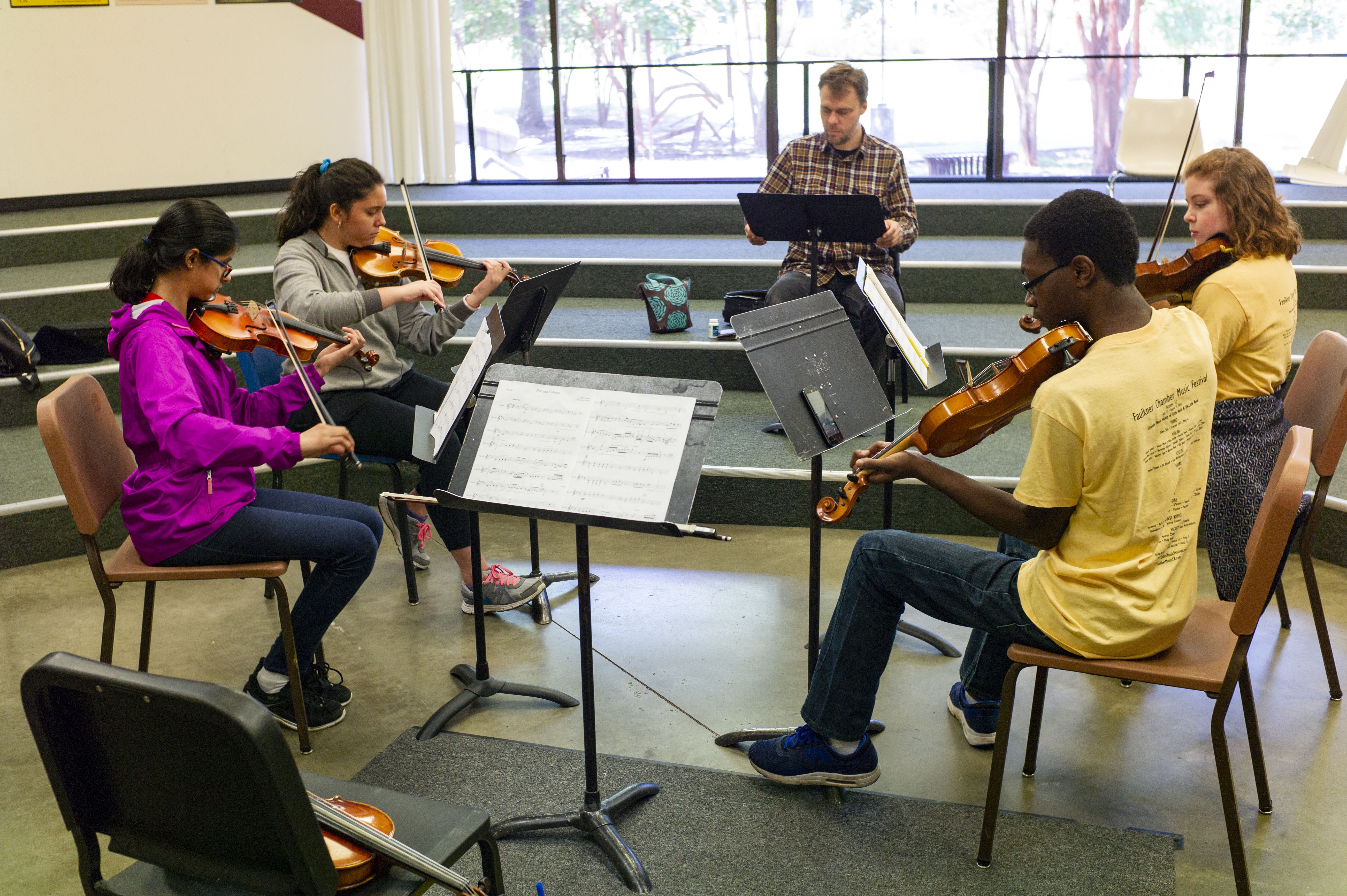 For these sessions, each group has someone coaching and conducting the sessions, but the idea is that these musicians will eventually fly that nest; chamber music is, after all, typically played without a conductor, with the players themselves responsible for keeping time, cuing entrances and playing as a unified whole. Often, that means musicians must not only know their own part, but the other parts, too. Violinist and FCMF Faculty Member Katherine Williamson reinforced that skill with three violinists and a pianist in a voice studio. “Amelia and Hannah, where do you come in together on the coda?” 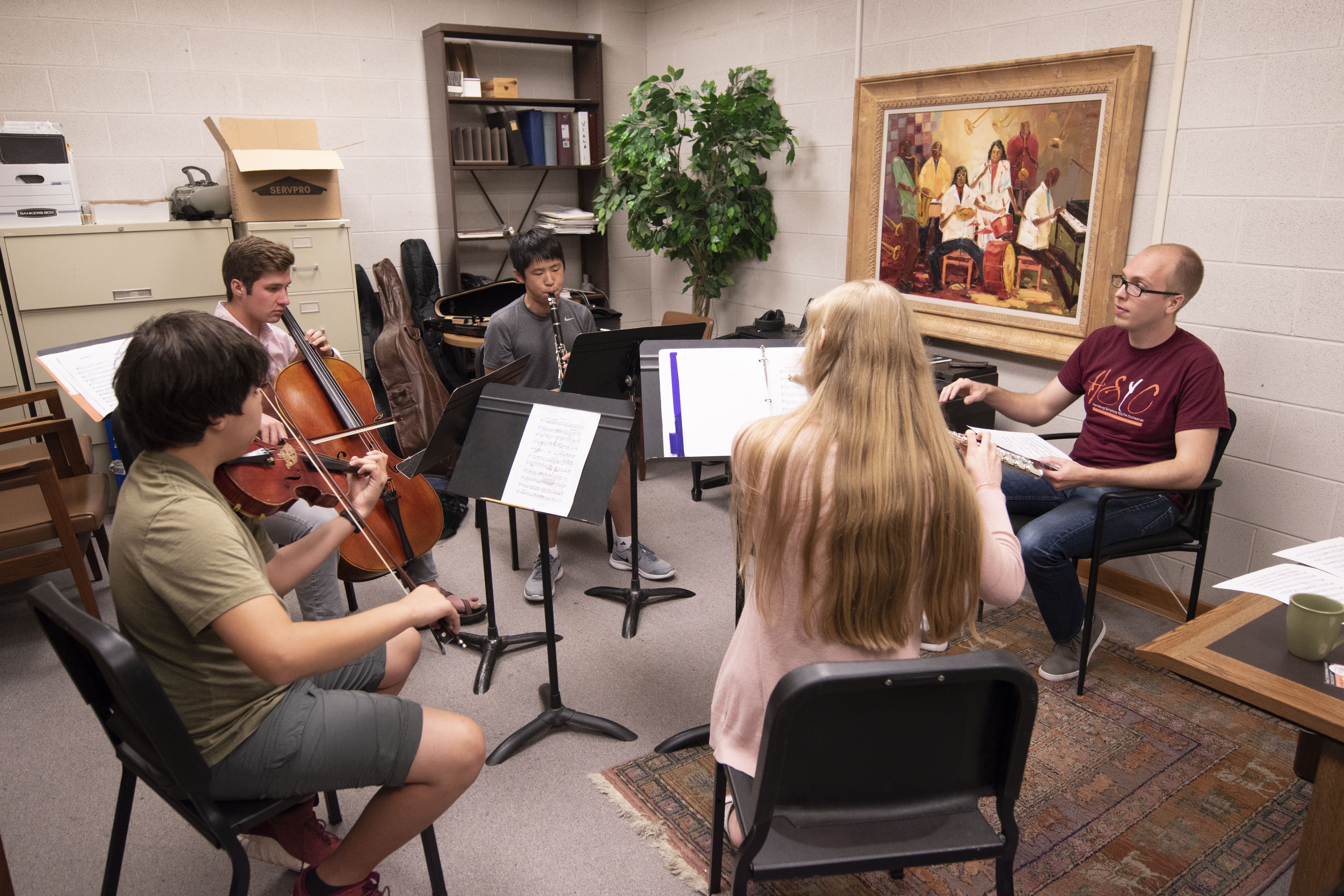 A Ravel vocalise was rehearsed across the hall, under the direction of oboist and FCMF Faculty Member Andi Oeste. “That was the best one so far,” he said, after the students finished a passage. “And Daniel, be sure that the notes aren’t dying.” Oeste, Williamson, Crosmer, Zlabys and the rest of the FCMF faculty are modeling behaviors that the students will need to have in their repertoire along with etudes and scales; how to take criticism in front of your peers gracefully, how to read your colleagues’ body language during a piece of music, what the conductor means when she says “the ‘and’ of four.” 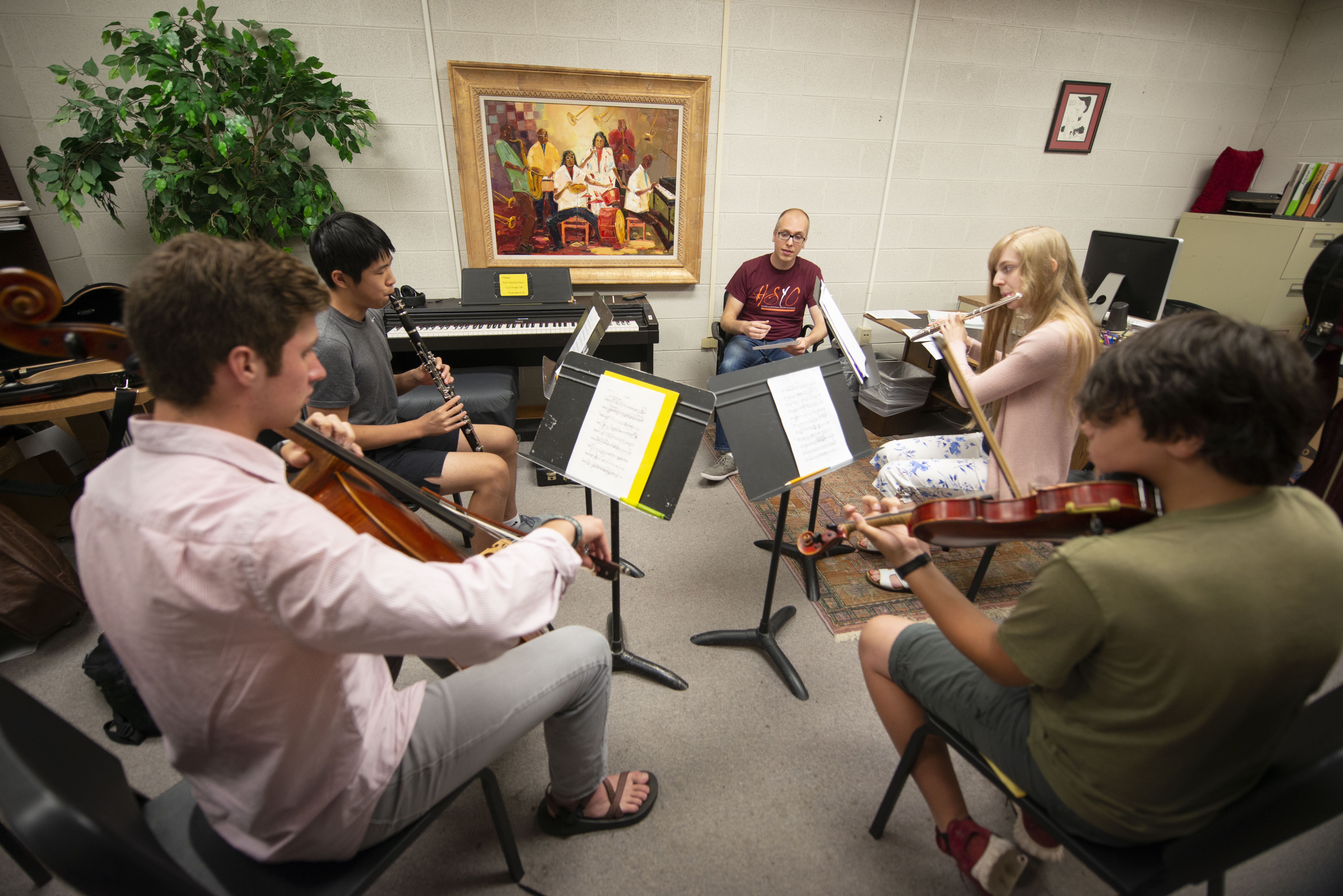 “A lot of it is social,” Robson said. And, as if on cue, violinist and fellow FCMF Faculty Member Yaira Matyakubova modeled that collegiality, starting up the staircase with a violin case on her back and the mid-day coffee order in her arms to caffeinate her colleagues for the long day ahead.