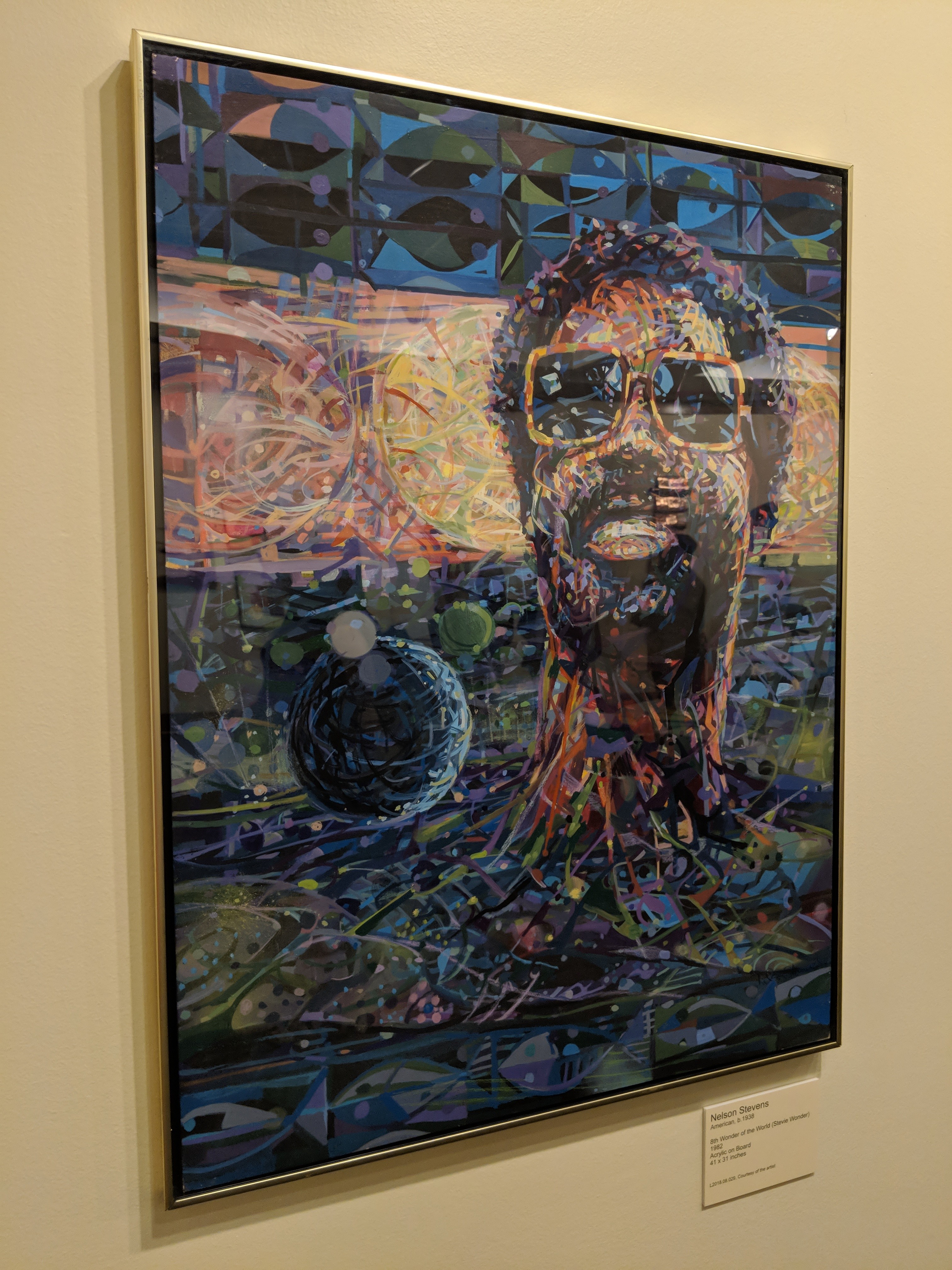 At the helm of a table on the bottom floor of the Mosaic Templars Cultural Center sits a record player with a copy of Miles Davis’ “A Kind of Blue” propped up on its lid. At the other end, there’s an easel with three blocks of text: “Constructive Criticism: We’re not talking about you. We’re talking about your art.” That text – and those unheard trumpet melodies – are a piece of the story of “AfriCOBRA Now: Respect – Celebrating 50 Years,” an art exhibit curated by Hearne Fine Art Director Garbo Hearne and her daughter Auna R. Hearne to commemorate a half-century of work by a collective called “The African Commune of Bad Relevant Artists.”

The exhibit is up at MTCC through Monday, Dec. 2, with an opening reception Thursday, Sept. 20, 6-8 p.m., a noontime “Lunch and Learn” panel discussion with the visiting AfriCOBRA artists Friday, Sept. 21 and a master class 11 a.m. Saturday, Sept. 22 with art students from University of Arkansas at Pine Bluff, University of Central Arkansas and UA Little Rock. All events are free and open to the public, and the museum’s hours are 9 a.m.-5 p.m. Tue.-Sat.

There are, in fact, two anniversaries being celebrated with “Respect” exhibit. One is the 10th anniversary of the Mosaic Templars Cultural Center itself, opened at the corner of 9th and Broadway streets in 2008 to the history of Mosaic Templars in America, and to tell the story of Arkansas’s African American history. AfriCOBRA’s “Respect” kicks off a yearlong series of events celebrating that decade of work.

The other anniversary is the inception of AfriCOBRA collective by Pine Bluff native Jeff Donaldson and four other members of the Organization of Black American Culture in 1968. Energized as they were by the community’s response and connection to the Wall of Respect — a 20-by-60-foot outdoor mural OBAC installed on the side of a tavern in Chicago’s south side at the corner of 43rd Street and Langley Avenue — Donaldson and his collaborators established what was then called the Coalition of Black Revolutionary Artists. Their mural, a piece of which MTCC Director Christina Shutt encountered many years later at Chicago’s Museum of Public History, “would really become a blueprint for art in a public space,” Shutt told us, and AfriCOBRA itself would become a think tank for the black aesthetic in America, seeking to make work that, as a press release reads, embodies “the shared visual language for positive revolutionary ideas.” Or, as excerpted from Donaldson’s “AfriCOBRA Manifesto,” first published in October of 1970 by Black World Magazine:

“It’s NATION TIME and we are searching. Our guidelines are our people – the whole family of African people, the African family tree. And in this spirit of familyhood, we have carefully examined our roots and searched our branches for those visual qualities that are most expressive of our people/art. Our people are our standard for excellence. We strive for images by African people/experience and images which African people can relate to directly without formal art training and/or experience. Art for people and not for critics whose peopleness is questionable. We try to create images that appeal to the senses – not to the intellect.”

The passage goes on to describe the three categories of work: “Definition: images that deal with the past, Identification: images that relate to the present” and “Direction: images that look into the future.” The Manifesto concludes with the following: ‘We are a family of image-makers and each member of the family is free to relate to and to express our laws in her/his individual way .. dig the diversity in unity. We can be ourselves and be together too … Check. We hope you can dig it, it’s about you and like Marvin Gaye says, ‘You’re what’s happening in the world today, baby.’ ” 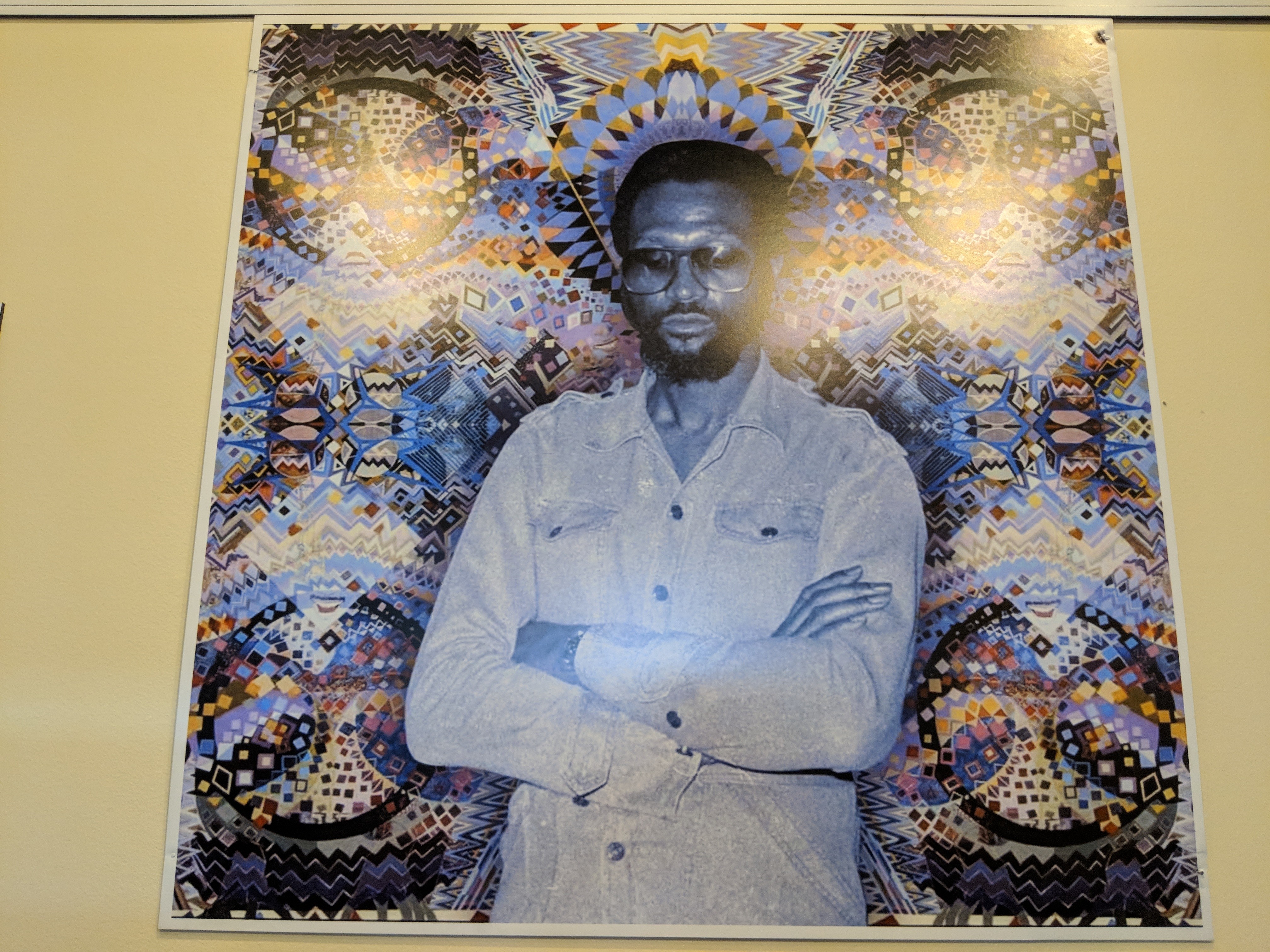 It’s that sense of “now” that I initially thought was referenced in the exhibit’s title. As it turns out, it also describes the “now” of AfriCOBRA’s current roster, reshaped over the course of five decades. Donaldson, Carolyn Mims Lawrence, Moyo Okediji and others are among the list of former members, with the current collective being a consortium of nine: Akili Ron Anderson, Kevin Cole, Adger Cowans, Michael D. Harris, Napoleon Jones-Henderson, James Phillips, Frank Smith, Nelson Stevens and Renee Stout. Huddled at the table that bridged the “Constructive Criticism” easel and “A Kind of Blue” was the entire collective, save for Smith.

They’d come from all over, lending their work and time to Donaldson’s memory, as well as a half-century during which the titular “relevance” of their art has been redefined and reexamined as the cultural landscape has shifted.

“There’s an important point to be because some people think that we’re a protest group,” Jones-Henderson said. “We’re still relevant. … ‘Relevant’ comes from being grounded in the spiritual and community context you come out of. It’s an inclusive, familial kind of context. The community will let you know if you’re relevant.” Jones-Henderson’s enamel on copper works, “Blind Boys of Alabama” and “I’d Go Blind,” were hung on the south wall behind him as he spoke. 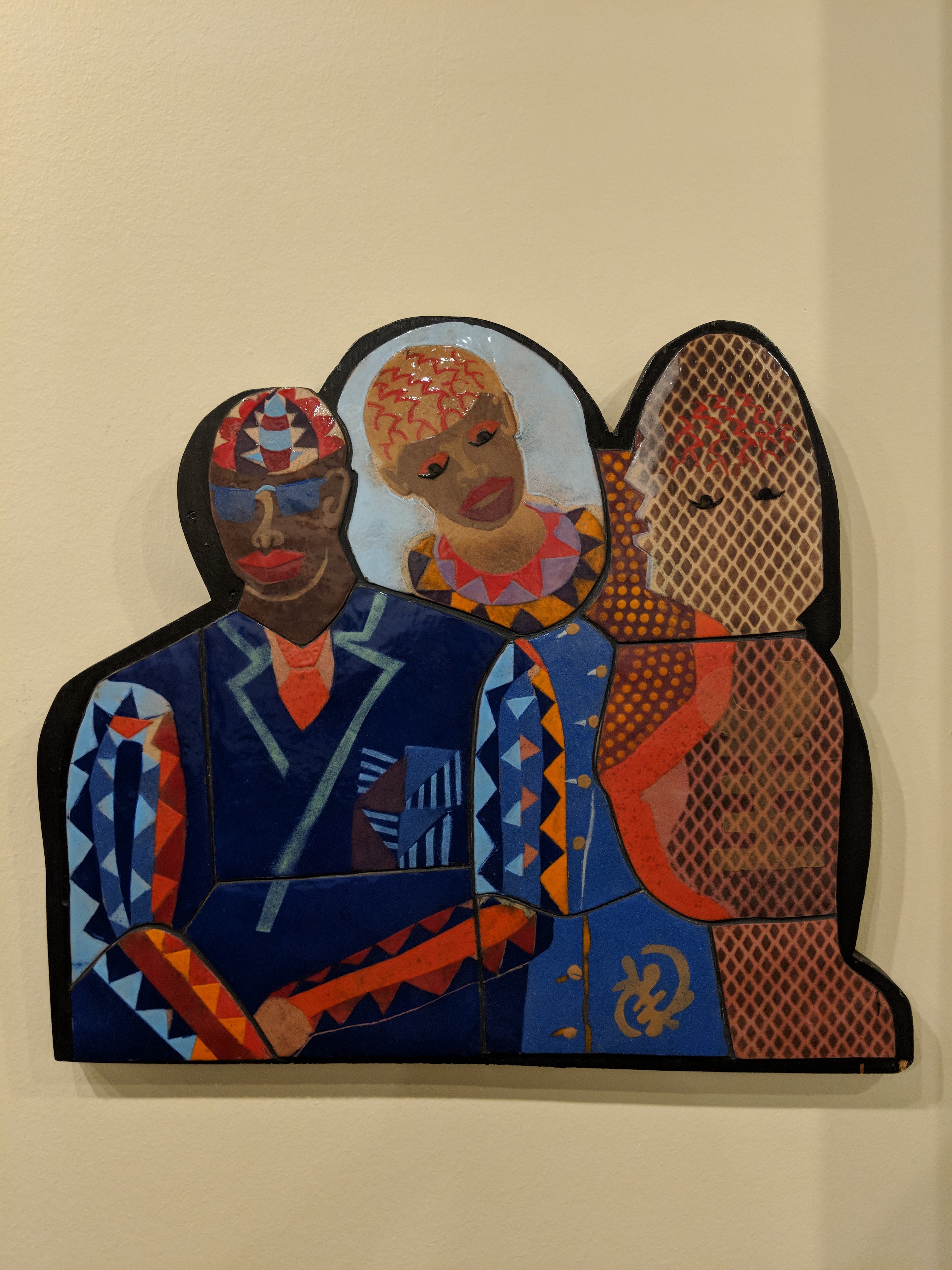 There was no music coming from the record player, but it was nevertheless clear that AfriCOBRA work was conceived and created to a decades-long soundtrack. Recalling the artistic hotbed in Chicago in which AfriCOBRA grew, Jones-Henderson mentioned Sun Ra and the “the larger community of dancers and image makers and poets … Lerone Bennett, the South Side Community Art Center.” The collective, which met regularly to discuss their art with that “constructive criticism” mantra in mind — among other mantras — was effective “through that synergy of these different forms interfacing with a sense of unity, and a sense of little enclaves.”

Cowans, whose work anchors explosive tangles of cut plastic strips on wooden and acrylic grids, points to his own musical influences: “For me, jazz was important. Rhythms, of . I’d read a lot about Kandinsky.” He described his induction into the group after meeting Stevens at the month-long Festac ’77, the Second World Black and African Festival of Arts and Culture. “Here was a group of guys. They weren’t fighting anybody. They were dealing with painting at the highest degree. It was constructive, and it was a family.”

Stout’s “Loving You Is Ecstasy” bespeaks its musical inspiration directly; the images are lined with a note that reads, “When I listen to the Ohio Players, I think of you.” “I love music!” she explained. “And I imagine when I did this I was thinking of some ex-boyfriend, and I do know who it was!”

Through an alter ego herbalist/fortune teller named Fatima Mayfield, Stout’s work unfolds like a play, with bones and opaque jars and found objects serving as props. In “The Pearl Gourd,” a pearlescent-painted gourd hangs from a rusty chain, transformed into something that looks more like a street lamp, its organic nature betrayed by bumps and curvatures lamplights don’t have.

By way of dozens of extensively researched (and elegantly presented) timelines and biographies from Auna Hearne, the half-century-long AfriCOBRA story is up on the walls at MTCC for anyone to see for free, by a new work commissioned especially for the anniversary occasion, and created by the current AfriCOBRA collective. The image-makers kept mum when we asked about it, volunteering only that it was a logistic feat to get it made at all (“Herding cats,” Stout chimed in) and that its roots lie in the days when AfriCOBRA members, true to a mission of making art for the people rather than for elite galleries, would sell their prints as a group for $10/piece, them with the fixed price so that they couldn’t be resold at a gouged rate elsewhere.

The collaborative anniversary commission, still shrouded in mystery and plastic when we visited Thursday afternoon, is to be unveiled at the opening reception for “AfriCOBRA Now: Respect – Celebrating 50 Years” Thursday evening. 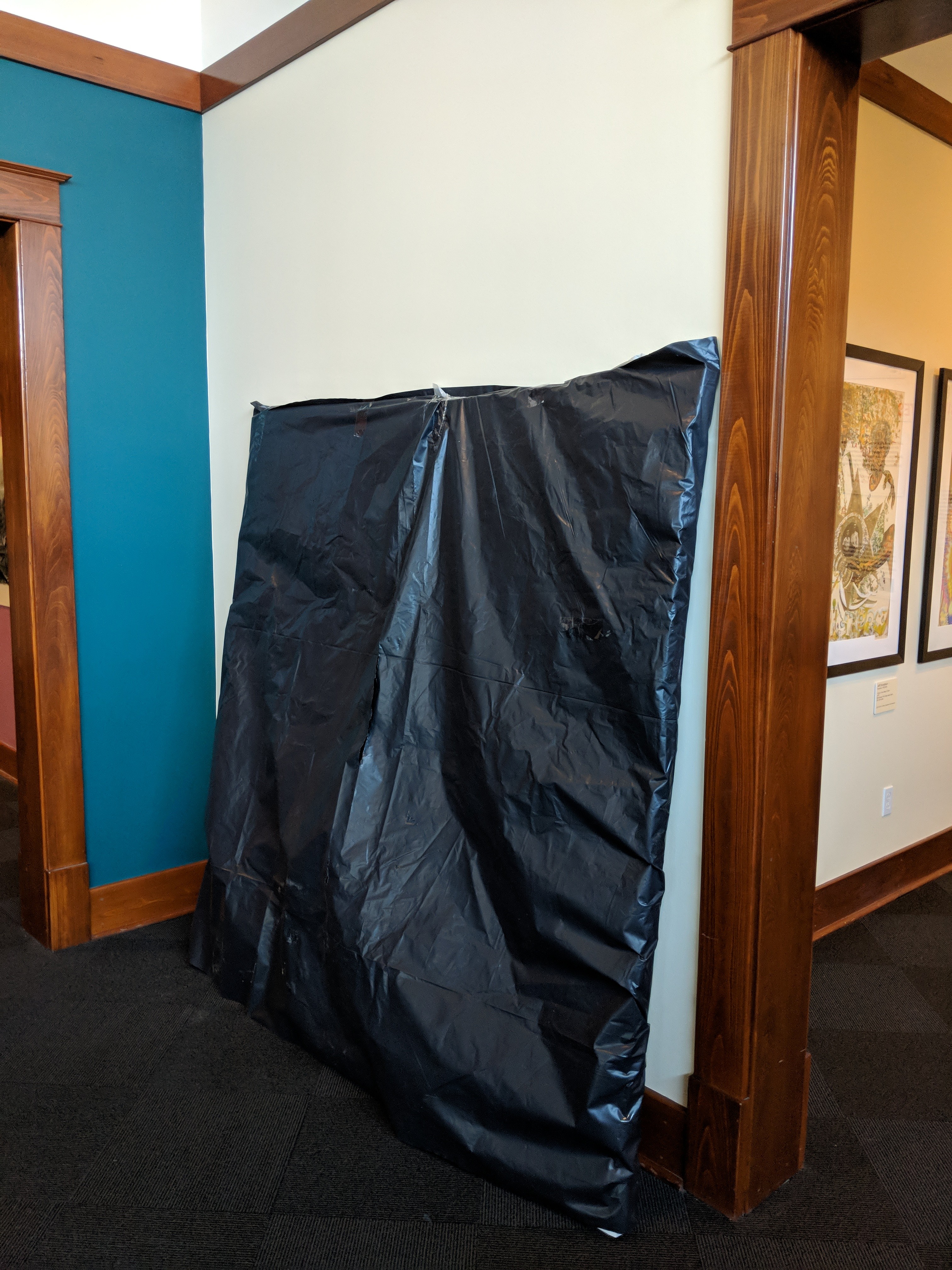