Sen. Jason Rapert (R-Conway), in response to a poster for a metal bill featuring a photoshopped Rapert biting a baby, has called for a boycott of Vino’s, the longtime punk rock/metal sanctum hosting the show. 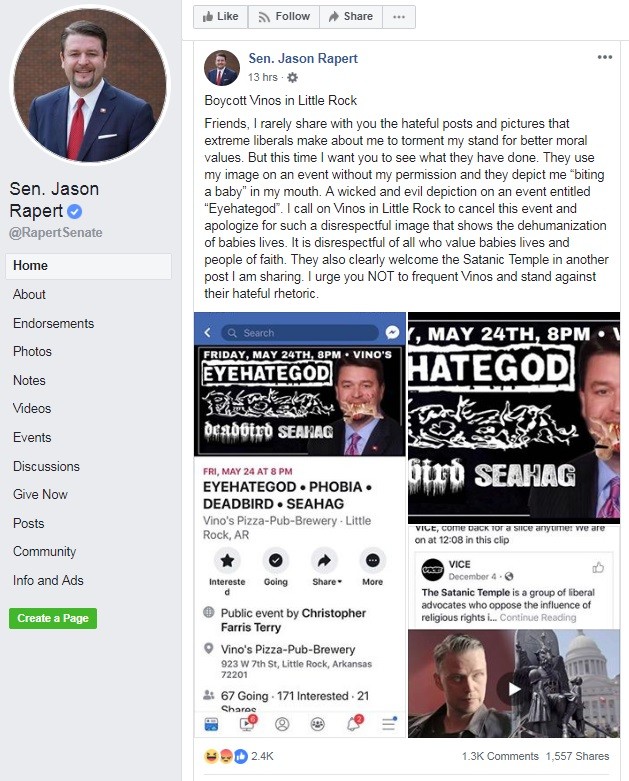 Unsurprisingly, Rapert’s base has declared disdain for the poster and for Eyehategod, the New Orleans sludge metal band headlining the show. 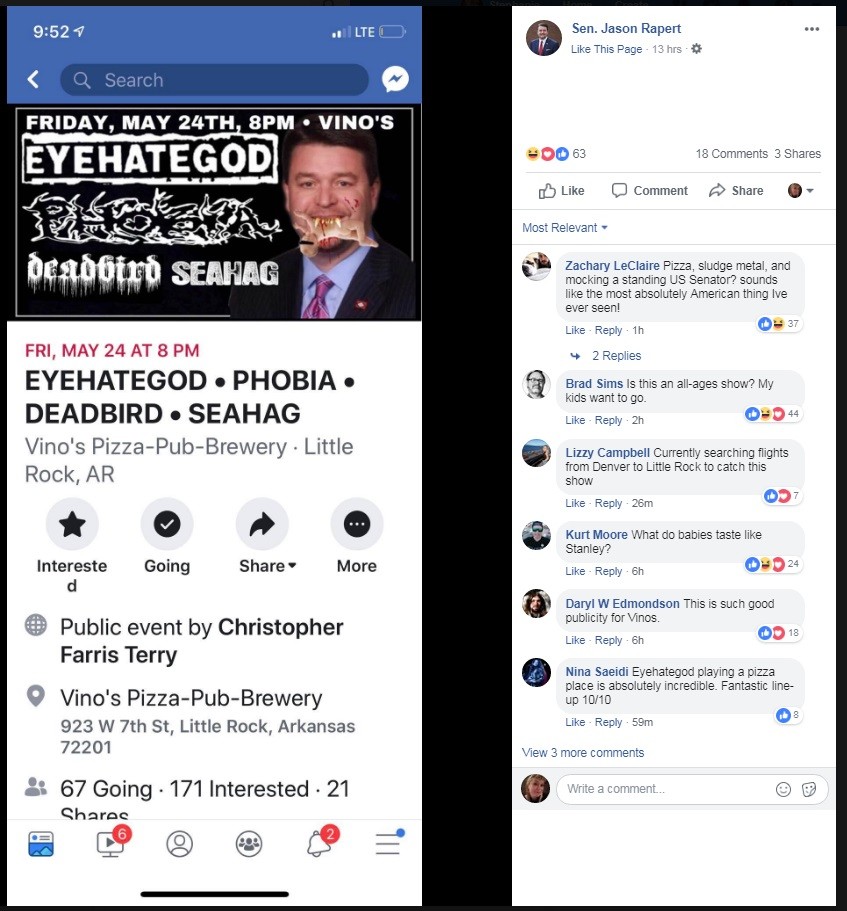 It’s not the first time the anti-choice politician has been a topic of conversation at the beloved brewery/pizzeria; even expat comedian Matt Besser returned home to Arkansas last fall to lend some celebrity aid to the Faulkner County Democratic Party ahead of last November’s election. Besser said in a 2018 Q&A with the Arkansas Times:

“I believe I first read about Rapert when he was trying to get the Clintons’ name taken off the airport, and I thought to myself at the time, “Wow, what a stupid priority for a legislator to have. Boy, I bet his constituents are pissed he is wasting his time on their dime.” Then I read about his bill to get the Ten Commandments [monument] placed on the Capitol grounds. Separation of church and state is kind of an obsession of mine. The last time I performed in Little Rock my whole show was about separation of church and state — probably to a fault! So, when I read the ultimate test of the separation of church and state was being instigated by Rapert in MY HOME TOWN, I knew that I had to help vote this guy out. What an utter waste of time this guy is spending on what appears to be stunts to advertise his church more than progress for his district.

My mind didn’t get totally blown, though, until I saw a documentary called “Meth Storm,” which is the saddest thing I’ve seen in a long time. It focuses on some people in Faulkner County whose lives have been ruined by the meth epidemic. Then I realized, “Wait, Faulkner County is in Rapert’s district! The guy spending his time in the House changing airport names and trying to put granite religious idols on the Capitol lawn is the so-called leader of the county starring in ‘Meth Storm!’ ” This has to stop. Vote him out. His opponent is Maureen Skinner, who is a politician with her priorities straight. Vote her in.”

Here’s hoping the coolers at Vino’s are well-stocked this week.