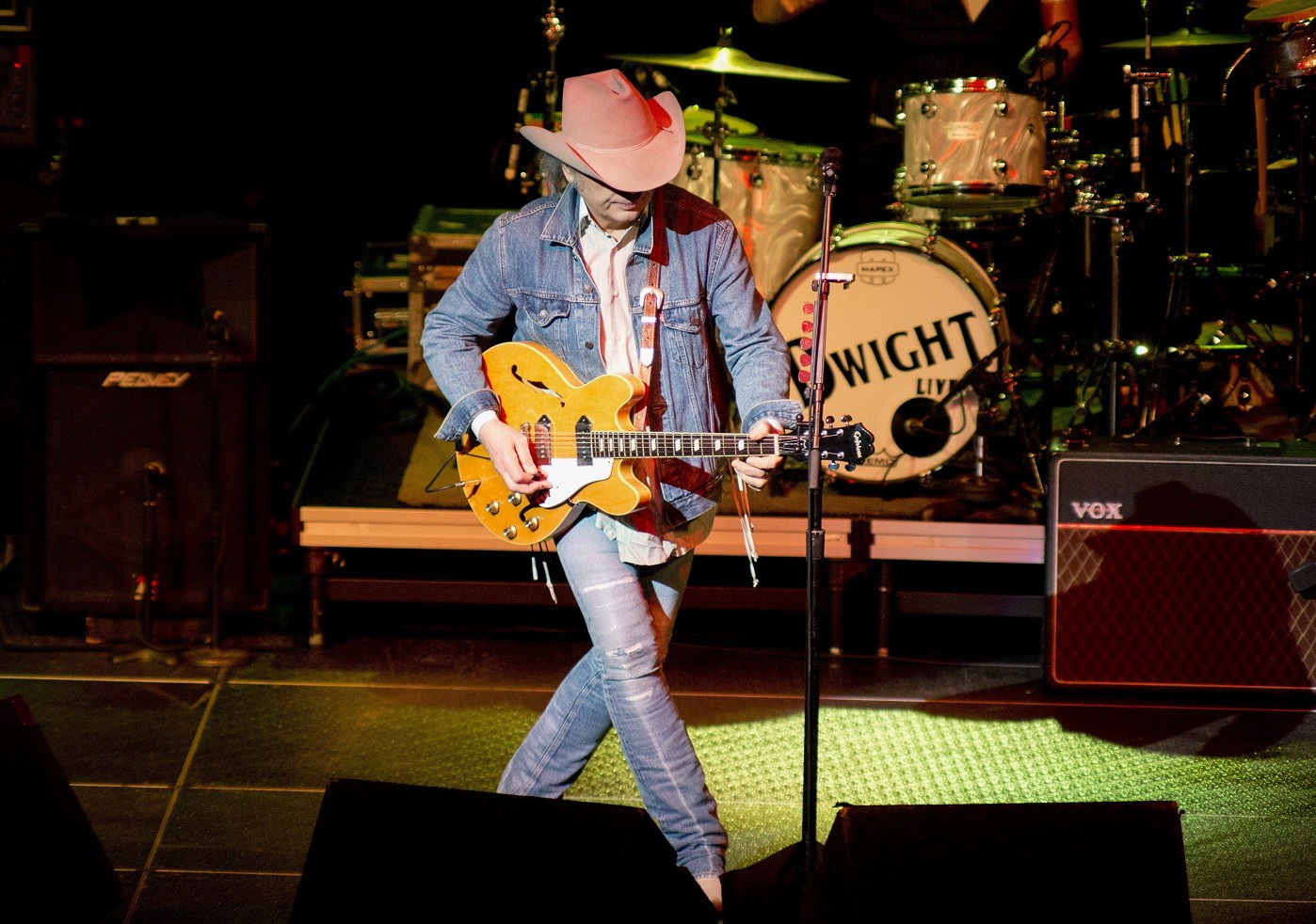 The “Honky Tonk Man” was in fine form Sunday night.

In a memorable, rip-roaring show at Verizon Arena in North Little Rock, Dwight Yoakam took fans back to the heyday of steels guitars, twang, fiddles and country music sounding like country music.

He opened with Chuck Berry’s “Little Queenie” and also offered up his take on the Johnny Cash standard “Ring of Fire” and Elvis Presley’s “Little Sister” and “Suspicious Minds,” all the while doing his pivoting/swirling/dancing thing in a hat, denim jacket, boots and those trademark skintight jeans.

Throughout his 30-plus-year career, Yoakam has been very good at serving up covers like these. Covers, in turn, have been very good to him. Case in point: his terrific 1986 hit remake of Johnny Horton’s “Honky Tonk Man.”

Of course, it was a real treat to see and hear Yoakam performing numbers from his own extensive catalog. But when he covered idols, inspirations, mentors and friends like Buck Owens and Merle Haggard, it was just plain awesome.

And, as it turned out, there were a lot of those moments throughout the show. Haggard’s “The Bottle Let Me Down,” for example, and “Act Naturally,” the song “about a man who’s sad and lonely” that helped make Owens a superstar.

Along the way, Yoakam paused occasionally to tell a story or two about these artists and songs, such as how Haggard was introduced to “The Fugitive,” an early hit of his by songwriters Liz and Casey Anderson, after an early morning breakfast at their ranch. The Andersons, Yoakam explained, liked listening to Haggard, who at the time was playing clubs in the Stockton, Calif., area and frequently treated the singer and his band to breakfast after late-night shows. (The Andersons, by the way, he continued, were the parents of Lynn Anderson of “Rose Garden” fame.)

As for his own hits, Yoakam delighted with “Ain’t That Lonely Yet,” for which he won a Grammy in 1994 for best male country vocal performance, as well as the likes of “Guitars, Cadillacs,” “Little Sister,” “I Sang Dixie,” “A Thousand Miles From Nowhere” and “Turn It On, Turn It Up, Turn Me Loose.” More recent recordings he put into the evening’s setlist included “Pretty Horses,” and “Then Here Came Monday,” a ballad he co-wrote with Chris Stapleton.

A highlight of the night, of course, was when he cranked out “Streets of Bakersfield.” Written by Heber Springs native Homer Joy in the early 1970s, it was originally recorded as a single by Owens. Hearing those famous opening lines – “I came here looking for something, I couldn’t find anywhere else” – made us smile, knowing we were in for a romping version of the song that Yoakam and Owens turned into a classic duet – and Yoakam’s first No. 1 hit – back in 1988.

His band members have to be some of the best musicians in the business, and he was often happy to showcase their incredible talents.

You most likely missed this stop on Yoakam’s tour to promote his new bluegrass album, “Swimming Pools, Movie Stars …” as it attracted only 2,590 mostly older fans. That’s too bad, because you also missed hearing talented newcomer Dillon Carmichael’s 10-song opening set that came down on the side of traditional country music as well.

With a rich, deep, very listenable voice, Carmichael – the nephew of country singer John Michael Montgomery and his brother Eddie Montgomery of the duo Montgomery Gentry – won us over with “Hard on a Hangover.” He proceeded to please with a number of songs off his “Hell On An Angel” album, including the title cut as well as his current single, “Dancing Away With My Heart.” He reminded us a little of David Allen Coe when he sang the first song he ever released, “Old Songs Like That.” Carmichael was that rare opening act that we wished had sang even longer than his allotted 45 minutes, so we’re looking forward to seeing how his career progresses.