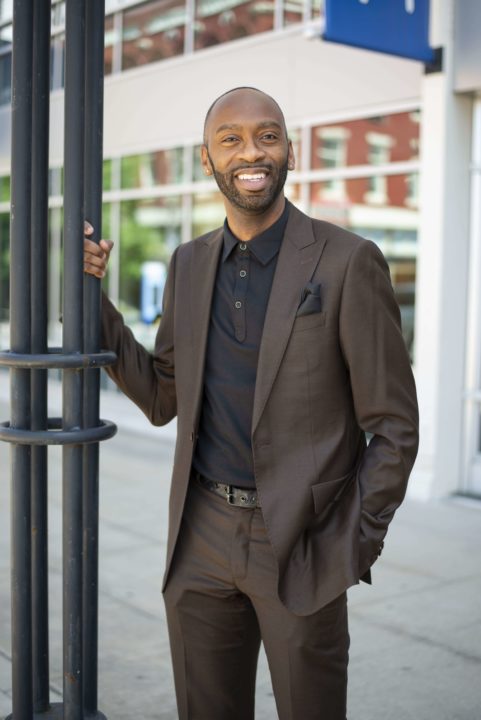 Little Rock native Steve H. Broadnax III grew up going to shows at the Arkansas Repertory Theatre with his grandmother, and he graduate d from Parkview High School. Now the head of MFA Acting in the School of Theatre at Penn State University, Broadnax, 42, will direct The Rep’s production of “Native Gardens,” a play by Karen Zacarias that American Theatre magazine has ranked as the eighth most-produced play in the U.S. during the 2018-2019 season.

What were your first impressions of the “Native Gardens” script?

When [The Rep] called me and asked me to direct “[Native Gardens],” I’d heard about it, but I had not read it. When I read it, I was very excited, because I thought it was a reflection of where we are now. To me, I believe that the work that I do should resonate: Why, and why now? I thought, first of all, it’s a comedy. It deals with neighbors, it’s a border dispute in a sense, and as I turn on CNN and MSNBC, I see where we are about immigration, border control, just being a good neighbor to each other nationally and internationally. I thought, [this is] a perfect play. … I thought it was brilliant.

“Native Gardens” is farcical and funny, which I feel makes it an important point of access for audiences.

I agree. It’s a comedy of manners, so we get an opportunity to hopefully laugh at the follies of humanity, but then also have a conversation and learn about it. I think that’s the best medicine, in a way. People don’t want to be hit over the head. … I think the theater’s a place where it doesn’t always need to be comedy, but it was awesome to see [Zacarias] write a comedy about these issues, to talk about immigration, border control, racism, sexism, ageism, all the ‘isms’ in a way that we could come in and laugh and hopefully have a conversation.

“Native Gardens” was written pre-Trump era, but it explores highly relevant themes. What do you enjoy about directing productions on such current topics? What challenges come along with that?

I enjoy the now-ness of it. Karen Zacarias did a rewrite. When we got the script, she sent us a new one like a week before we started. So there’s a new version. The art is growing. She keeps adjusting it to the climate of now, which is great, because it’s always relevant. I think what it does, is it doesn’t allow an audience to sit and look and go, ‘Oh, that’s old times. That’s in the past.’ No, it’s right now. It’s you. It’s us. So that’s exciting. I don’t find a challenge with it. If anything, it’s the thing that I get excited about, that a community can come and see themselves in the present, and learn in the present, and it doesn’t allow you to escape, because you go, no, this isn’t the 1940s.

[Zacarias] talks about the immigration issue. It may not have been in the national forefront the way that it is now, but in the Latinx community, it has always been a conversation. I just directed a show at La Jolla playhouse [in San Diego], which is 30 minutes from the border, and talking to the Mexican community, the Latinx community [there], that is something that was always of concern. Now it’s national news because of where we are today. But it’s always been a conversation that now is just surfacing. … It’s so brave and conscious of The Rep to do “Native Gardens.” My goal is to invite that community, to let them know that this theater is theirs, too.

This is a tiny cast of just six people, and you’ve directed very large productions before. What has your experience been like directing a much smaller cast?

I prefer it. I really do, I prefer the smaller, because it’s a sense of focus that you get, with really honing in on groups of four, six or two. It’s great to have these big stories, with a cast of 20 or whatever, but I love these intimate stories about humanity. That’s my favorite thing to direct. I think we can really get into the nuance of experience.

What are your goals as a director, both for “Native Gardens” and your other projects?

My goal was always to be a master of story. That’s still my aim, I don’t think I’ve mastered it yet. But it’s my favorite pastime, to talk about the mechanics of story. Whose story is being told? Who tells the story? What story lasts in time? What stories do we need? I always believed, back in the day, people went to Freud and philosophers to learn about life. Today, we turn on the TV. We got to the theater. That teaches us the potential impossibility of our human existence. So in every moment, I’m trying to deconstruct: What is it doing? How does it work? What’s the history of it? Where have we evolved? Where are we going now from it?

Your grandmother, Mary Louise Williams, brought you to shows at The Rep as a child. Does it feel like a full circle moment to come back and direct here?

Absolutely. I grew up always hoping to be on this stage, to be a part of The Rep. The theater that I was exposed to came through here. Bob Hupp was the artistic director at the time. Even Cliff Baker was here in my younger years. … We’re not next door to New York. This was my exposure to professional theater, so now to come back as a director is a dream come true. It’s something that I’ve sought after, it’s something I’ve always inquired about, and to be asked to come back is a great honor. … And I was saddened to hear that The Rep went down for a minute, so to be a part of its continuation and its new season again, I’m honored.

Get tickets to “Native Gardens,” up at The Arkansas Repertory Theatre April 19-May 5, at tickets.therep.org.