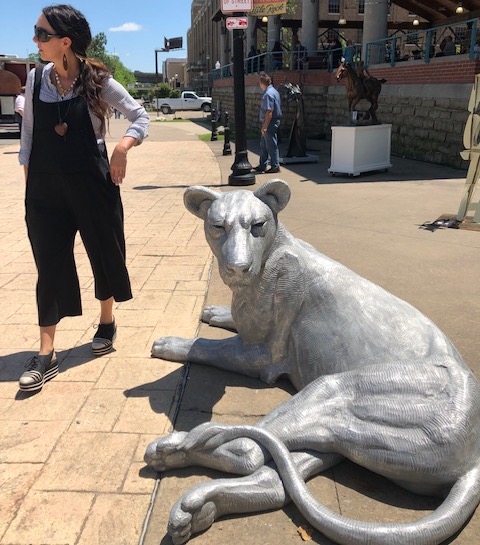 If you were at the Sculpture at the River Market show and sale this weekend, you likely noticed the pair of cast aluminum lions on the plaza north of the pavilions. They are headed for the Van Buren roundabout at the Little Rock Zoo, we’re told. I’ve asked for details from the city — who made them? who bought them? who decided to put them at the roundabout? —  but have no answer yet. They are very nice lions. Children will love them. Grownups will love them. Grownups would also like to know how they came to be purchased for the roundabout. We’ll update when we get the info.

UPDATE: The “Lion Pride” to be installed at the roundabout at Zoo Drive and Van Buren will feature three lions, a male and two females, Zoo Director Susan Altrui reports. The artist, Darrell Davis, is a member of the National Sculpture Guild out of Loveland, Colo. The sculpture was purchased for $150,000; the Sculpture at the River Market nonprofit, headed up by Jane Rogers and City Director Dean Kumpuris, which brought the idea for the purchase to the Little Rock Zoo Foundation, contributed $50,000; the Zoo Foundation contributed $75,000 and the city of Little Rock contributed $25,000. Hiland Dairy made a gift of $20,000 to the Zoo Foundation for the purchase.

Altrui said the lions will be positioned to face the Zoo as a nice directional guide to the real lions and other animals in the Zoo. The male will be in the middle (a throwback aesthetic decision, given that the females do the hunting). The sculptures will be lit at night, and the lighting can change colors for the holidays, and there will be landscaping around the installation. Altrui said the installation is probably a month off.

The sculpture is a bit of several good things happening at the zoo: The zoo recently opened a sensory garden and is building new exhibit areas for its Colobus monkeys and serval cats. It will also open a new conservation learning center in its renovated education building.