“A visitor standing upon one of the many majestic peaks in the area of the proposed park is thrilled by a panoramic view that cannot be had elsewhere in the South Central States. With cheeks flushed by the invigorating mountain breezes, the mountain climber is rewarded by an inspiring view of countless and nameless peaks, mountain groups, dense forests, and inviting valleys, all merging into the distant horizon. … Fed by crystal springs and like so much molten silver these streams flow, their turbulent courses unappreciated and rarely visited.”

Southeast Oklahoma is a strange land. There are no centers of commerce, and what’s there bespeaks an unlikely mix of identities. On the 7-mile stretch between Talimena State Park and Talihina, Okla., for example, you’ll spot an oversized church sign urging drivers to “Worry Less Pray More,” a Kiamichi Valley War Memorial tribute to U.S. veterans and a business by the name of “Canna Bliss Rx,” a fragrant establishment that popped up near the Ouachita Trail’s head, riding the wave that followed last year’s approval of Oklahoma’s comparatively libertine medicinal marijuana laws.

Moments away, on the Talimena Scenic Byway at Panorama Vista — 2,260 feet above sea level — the gales howl high and fierce. At this elevation, towering white oaks are reduced to bonsai-like proportions, punishingly pruned by wind and ice storms. Other vegetation acts as a visual compass; since the Ouachita ridgelines, atypically, run east to west, their slopes foster dramatically different sets of trees: hardwoods and paw paw trees on the north, serviceberry and shortleaf pines on the south. It’s a terrain of extremes, capable of showing you the better part of an entire county in a valley below, but equally as capable of shrouding you in dense droplets of opaque white mist, obscuring visibility a few feet in either direction. And, as state Rep. Cobb stated in the late 1920s, the Ouachitas are a gem hidden in plain sight for nearby Oklahomans and Arkansans, still rather “underappreciated and rarely visited” in comparison to their counterparts elsewhere in the American landscape. 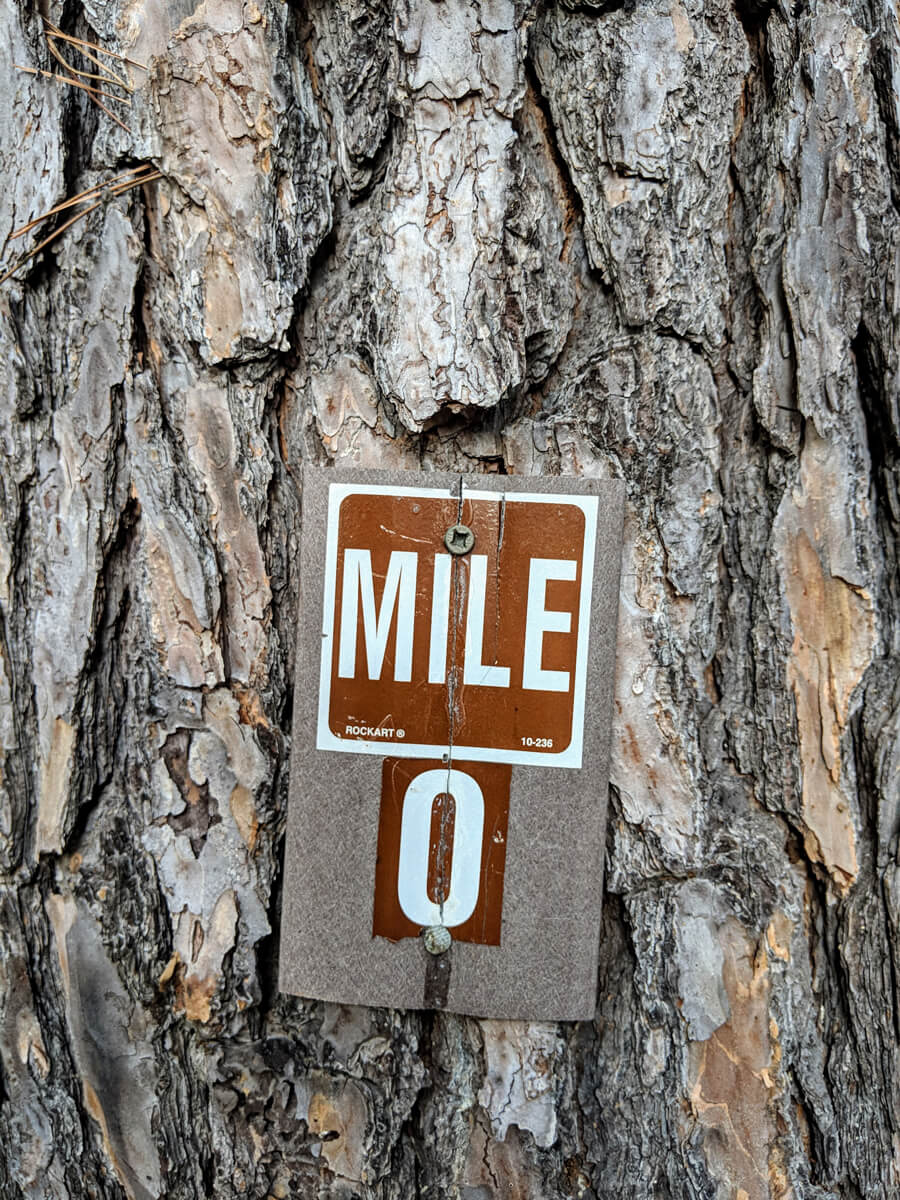 Make your way to Mile Zero

The fastest way from Central Arkansas to the western end of the Talimena Scenic Byway is, fortunately, also a picturesque one, particularly once you pass Royal (Garland County). You can skip the big box trip and fill up the cooler with smoked cheese and cold cuts from Burl’s Country Smokehouse (10176 Albert Pike Road, Royal, Ark., 501-991-3875), a roadside smokehouse made up to resemble a sort of hillbilly theme park, selling moonshine jelly, house-made sourdough bread and cinnamon rolls the size of a dinner plate. (You can reach Talihina this way, via Interstate 30 and U.S. Highway 270, or you could venture up Interstate 40 to Alma, down to Fort Smith and through Pocola and Poteau, Okla., toward Talihina on state Highway 112 and U.S. Highway 271.) Whatever your approach, you’ll see signs pointing you to Talimena State Park (50884 U.S. Highway 271, Talihina, Okla., 918-567-2052, travelok.com/state-parks/7645), at the center of which is a tree bearing a sign that reads “Mile Zero.” An alluring trail straight ahead marks an entry to the stunning, formidable Ouachita Trail — a 225-mile route that crosses the length of the Ouachita Mountain range and ends at Pinnacle Mountain State Park. Set up a campsite here at one of the drive-in tent sites, or hole up at the Hootie Creek House in town (202 First St., Talihina, Okla., 918-567-5388, hootiecreekhouse.com), a cozy six-room inn inside a historic brick building with a courtyard and sitting room.

Hang in outlaw country, or hail the Heavener Runestone

Venture about 45 minutes northeast of Talihina to the San Bois Mountains, where a former Jesse James/Belle Starr hideout called Robbers Cave State Park (4575 N.W. 1024th Ave., Wilburton, Okla., 918-465-2565, travelok.com/state-parks/6415) offers a swimming beach and pool, sandstone cliffs for rappelling and 8,246 acres of caves, lakes and trails to explore. Robbers Cave rents yurts, campsites, cabins, a lake hut and rooms at its Belle Starr View Lodge. Or, head northwest of Talihina to the 55-acre Heavener Runestone Park (18365 Runestone Road, Heavener, Okla., 918-653-2241, heavenerrunestonepark.com) and take the trail down to the huge vertical sandstone slab with runic inscriptions based in Viking-era Scandinavian grammar structures, the origins of which have catalyzed arguments among linguists and scholars since the stone was discovered in the 1830s.

Dine at The Rock House

Four nights a week, Sam and Tami Balzanna of Talihina fire up their commercial-grade kitchen equipment to serve hand-cut steaks, Maryland crab cakes and generous pasta platters in a remodeled Prohibition-era rock home that sits at the exact center of their 283-acre property. The Rock House (52060 Blackjack Ridge Drive, Talihina, Okla., 918-567-3577, therockhouse.us) is situated in the middle of the Kiamichi Mountains Range and Potato Hills, so diners can see for miles through the surrounding horse pastures while the Oklahoma wind howls through the rock columns on the front porch. Reservations are required. 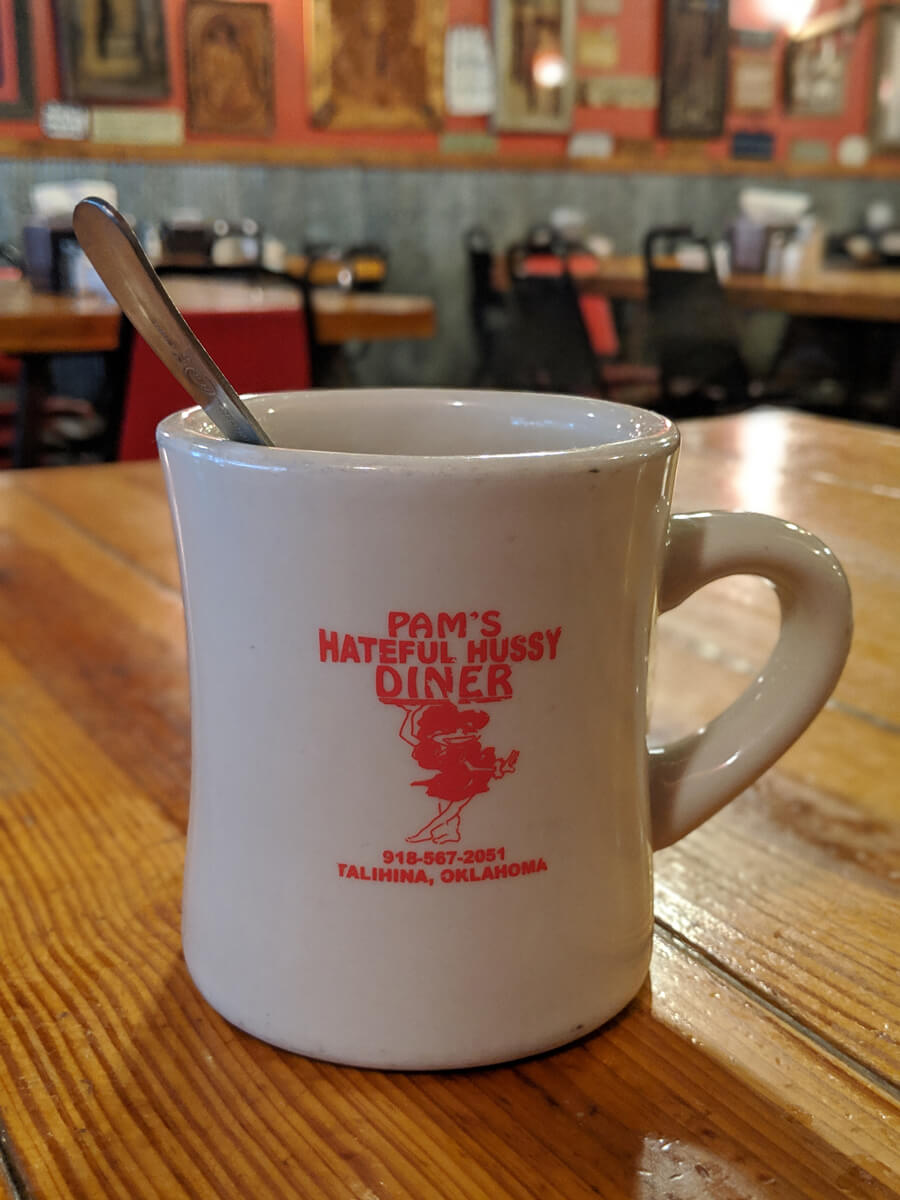 People rise early in Talihina, and most of the weekday crowd at Pam’s Hateful Hussy Diner (304 Dallas St., Talihina, Okla., 918-567-2051) will have moved on to their daily business by 8 a.m., but that doesn’t mean you shouldn’t go for eggs and hash browns for breakfast, or for the frybread “Indian Tacos,” or the locally beloved homestyle lunch buffet on Fridays and Sundays. The name, a YouTube video reports, was gifted to Pam by a customer and thereafter embraced as a brand, right down to the custom coffee mugs. 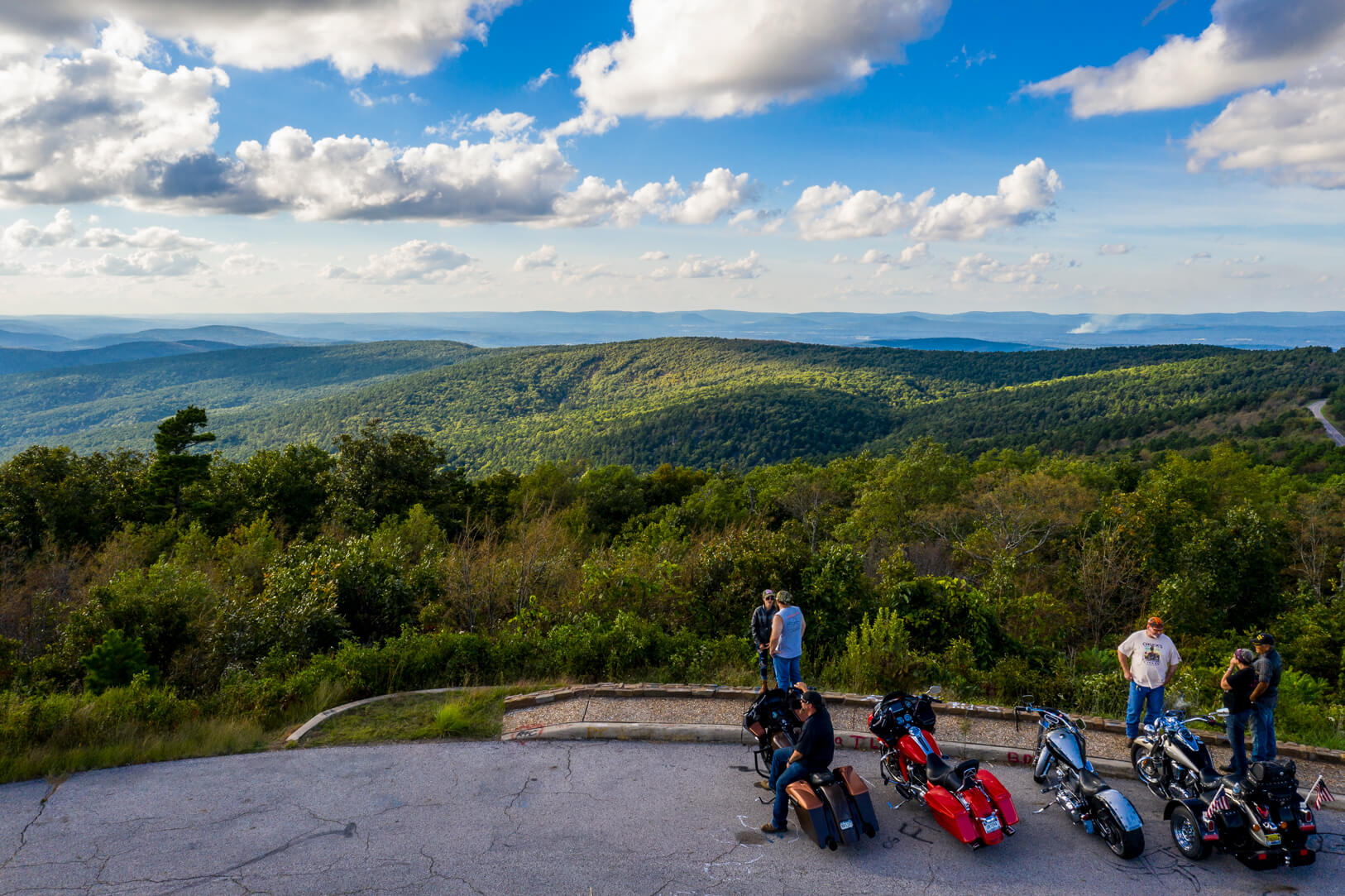 Most of the vistas along the Talimena Scenic Byway are marked by both road signs and tan-colored plaques interpreting the history and geology of the vista. The first views — at Old Military Road, Potato Hill, Holson Valley and Panorama Vista — come in quick succession of one another, offering to the patient traveler a chance to get into the rhythm of stopping often and absorbing what’s around her. It’s like a real-life version of the hilly Hot Wheels track you’d have built as a kid — that is, if your toy budget accounted for millions of tiny model pine trees. This is neither highway driving nor city driving. Embrace it. There’s not a lackluster vista to be found, but don’t miss the Panorama Vista — a flat, sky-scraping lookout seemingly invented for the camera function that shares its name.

Picnic and pitstop on Cedar Lake

Just north of the byway, there’s an 86-acre lake, surrounded by a network of short nature trails (including a scenic 3-mile hike around the lake perimeter) and equipped with a boat ramp, fishing piers and a swimming area. Cedar Lake is stocked with largemouth bass, catfish and bluegill to clean and grill for a picnic lunch if you brought along a rod and tackle box. If you got an early start and are looking for a more rigorous day hike (or a leisurely overnight hike, for that matter), the trailhead for Horsethief Springs Trail is in the picnic area; the 11-mile loop crosses several streams on the way up Winding Stair Mountain and joins up with the mighty Ouachita Trail before circling back down the northern face of the peak to Cedar Lake.

It’s good to be Queen (Wilhelmina)

Named by Dutch investors after their matriarch, Queen Wilhelmina State Park (3877 state Highway 88, Mena, Ark., 479-394-2863) appears to the eastward traveler just after crossing the Oklahoma/Arkansas state line, towering and ambassadorial on the hillside. The “Castle in the Sky” lodge, built in 1898 and rebuilt twice since then, sits on the apex of Arkansas’s second highest peak and has 38 rooms and a restaurant. A 1.5-mile miniature railroad runs between the campground and the lodge between Memorial Day and Labor Day. In the event the byway overlooks left you wanting more, the quick 1.3-mile loop trail out to Lover’s Leap and back rewards the hiker with another sprawling view of the rolling Ouachitas. Don’t miss one of the guided tours of the “Wonder House,” an architectural oddity constructed in 1931 that houses nine levels in what appears, from the outside, to be a modest two-story rock domicile.

If the lodge restaurant doesn’t trip your trigger for dinner, there are a couple of places open in the evening in downtown Mena: Branding Iron BBQ & Steak House (623 Sherwood Ave., Mena, Ark., 479-437-3240) serves up fried green tomatoes and potato-and-brisket soup with aged Black Angus steaks and whole racks of ribs. Or, if you’ve landed in Mena on a weekday, duck into Suzy Q’s Sweet Creams & Coffee (601 Mena St., Mena, Ark., 479-216-6770), a charming boutique storefront in the historic downtown district that pairs after-dinner delights like affogato, hand pies and old-fashioned banana splits with vintage tabletop board games.

On your drive down winding Rich Mountain (and out of the clouds), you’ll pass through the rolling farmland in the towns of Ink and Yocana into Pine Ridge, home of the Lum and Abner Jot ’Em Down Store (4562 State Highway 88 W., Pine Ridge, Ark., 870-362-4442). Inside the walls of the 1909 building — which doubles as the community’s official post office — you can get lost in a trove of artifacts detailing the careers of Chester Lauck and Norris Goff, the comedy duo who broadcast over 5,000 radio shows under their adopted hillbilly monikers, Columbus “Lum” Edwards and Abner Peabody. The real gem here, though, is Kathryn Moore Stucker, the museum owner/curator and Pine Ridge historian who stewards the shop, who unquestionably knows more about Lum and Abner history than anyone else on Earth. Should you need sustenance before that eastward stretch, stop in to the Skyline Cafe (618 Mena St., Mena, Ark., 479-394-5152) and grab some eggs with kielbasa at one of Arkansas’s oldest diners. Bring cash; Skyline does not accept credit/debit cards.

Business hours at the Dairyette (717 U.S. Highway 270, Mount Ida, Ark., 870-867-2312) often mean the square footage of the dairy bar equals less than the square footage taken up by the cars and trucks huddled around it. A limeade or a milkshake should be at the top of your to-do list, and the cheeseburger is quintessential drive-in fare.

This slice of Montgomery County is situated atop massive quartz deposits, and amateur miners can pay a daily or hourly fee to hack away at exposed hillsides in search of geological treasure at a handful of crystal mines open to the public. Must-haves for a day dig: old clothes, gloves, water, sunscreen and a digging tool commensurate to the size crystal you hope to haul home (shovel, crowbar, screwdriver). Popular mines include the Jim Coleman Rock Shop & Crystal Mine (5837 state Highway 7 N., Jessieville, Ark.), Wegner Crystal Mines (82 Wegner Crystal Ranch Road, Mount Ida, Ark., 870-867-2309) and the Coleman Miller Mountain Mine (358 Bighole Road, Jessieville, Ark., 501-984-5257). Paying a visit to the website of the mine of your choice could spare you an idle wait; quartz farmers are people of routine and often have set departure times for the journey from their rock shop to their tucked-away mines. 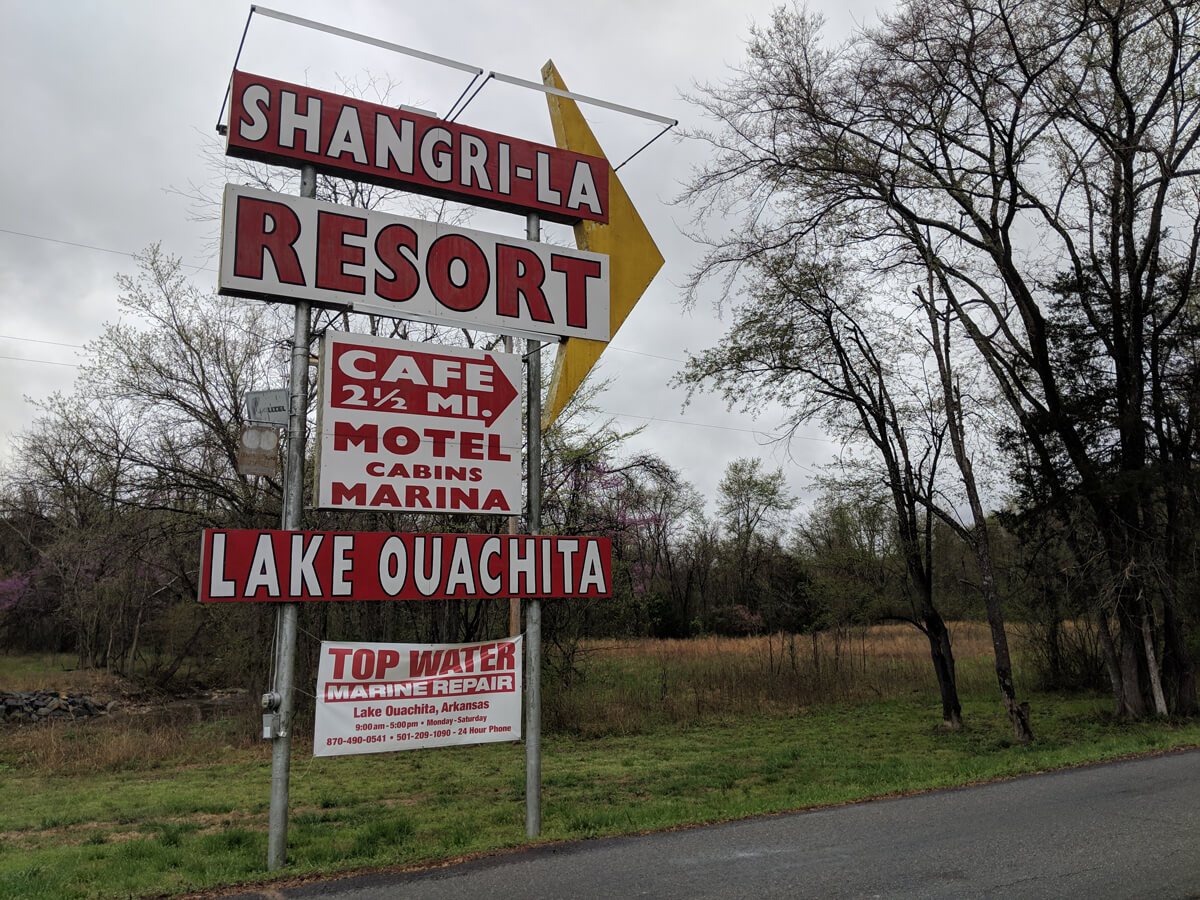 Pull up a barstool at the Shangri-La

This mid-century marina’s roots lie in the days when Americans first fell in love with the idea of the family automobile — and with road tripping. Boathouse decor adorns the cafe at Shangri-La Resort (987 Shangri La Road, Mount Ida, Ark., 870-867-2011) where, for 50 years, owner Varine Carr has been stocking the pie cooler with delights like coconut creme, butterscotch, lemon, cherry and chocolate pies worth pairing with a cup of coffee or packing up for a mid-float snack.

Cool off in Lake Ouachita

Arkansas’s largest lake (after Bull Shoals, that is, which we share with Missouri) is the stuff of fairytales: 40,000 acres of dense forest with epic mountain biking along the Lake Ouachita Vista Trail, destination striped bass fishing, boat/kayak rentals and around 200 islands to explore. The lake’s 16-mile Geo-Float Trail, marked by yellow buoys, gives motorboaters a tour past the quartz-veined Zebra Rock, natural beaches and cliffside rock formations whose waves and curves detail millions of years of geological history.